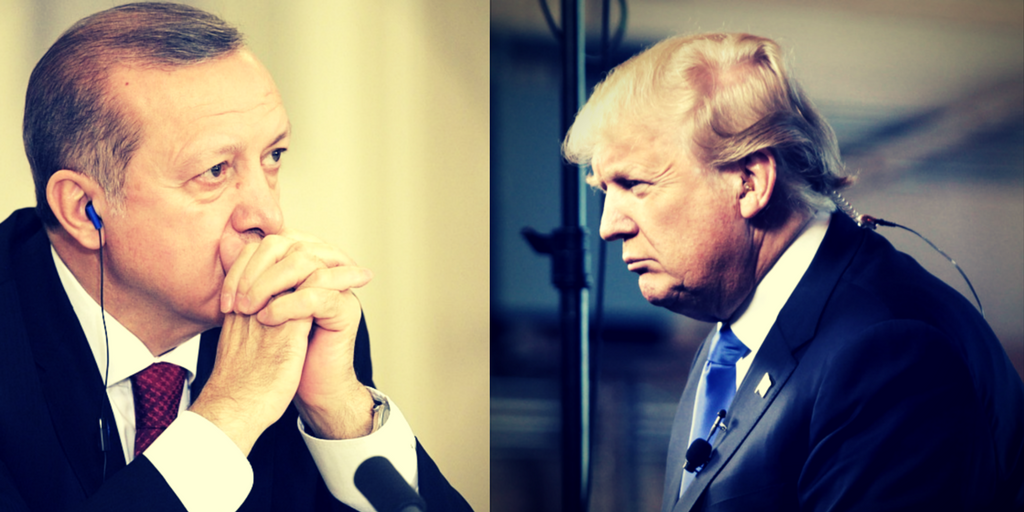 On Wednesday, President Donald Trump had a long talk with Turkish President Recep Tayyip Erdogan. The telephone call came in the wake of Erdogan’s most recent demonstration of the fact that under his leadership, the Turkish-American alliance has become an empty shell.

Over his 15 years in power, Erdogan has gutted what had been a substantive, mutually beneficial and strategic alliance between the two countries since the dawn of the Cold War.

Last Saturday, Erdogan sent his forces over Turkey’s southern border to invade the Afrin region of Syria. The U.S.-allied Kurdish People’s Protection Units (YPG) have controlled the area, northwest of Aleppo, since 2012.

There are no U.S. forces in Afrin. But the area is predominantly populated by non-Arab minorities, including Yazidis, Armenians, and Kurds — all of whom are pro-American.

The Turks say their objective in “Operation Olive Branch” is to seize a 20-mile wide buffer zone on the Syrian side of their border. That includes the town of Manbij, located a few hundred miles east of Afrin, also controlled by the YPG.

Unlike Afrin, there are many U.S. forces in that city. A contingent of U.S. Special Forces charged with training YPG forces are stationed there. On Tuesday, Turkey’s Foreign Minister Mevlut Cavusoglu threatened those forces. “Terrorists in Manbij are constantly firing provocation shots,” he said, according to Reuters. “If the United States doesn’t stop this, we will stop this.”

Cavusoglu added, “The future of our relations depends on the step the United States will take next.”

The Turks’ pretext for the Afrin operation is as anti-American as it is anti-Kurdish.

On January 14, Col. Ryan Dillon, spokesman for the U.S.-led military coalition in Baghdad said that the U.S. is training a Kurdish border patrol force in Syria that will eventually number some 30,000 troops. On January 17, Secretary of State Rex Tillerson said the U.S. has no timetable for removing its forces from Syria.

In response, Erdogan vowed to “drown” the border protection force “before it is even born.”

Erdogan then threatened the U.S.

“This is what we have to say to all our allies: Don’t get in between us and terrorist organizations, or we will not be responsible for the unwanted consequences.”

The Trump administration’s immediate response to Turkey’s aggression against its Kurdish allies was deferential, to say the least.

Tillerson disavowed Dillon’s statement, saying the plan to train a border fence was never approved. “That entire situation has been misportrayed, misdescribed. Some people misspoke. We are not creating a border security force at all.”

These statements are consistent with the U.S.’s general practice for the past 15 years, as Erdogan has gradually transformed Turkey from a Westernized democracy and a core member of NATO into an Islamist tyranny whose values and goals have brought it into alliance with U.S. foes Iran and Russia and into cahoots with Hamas, the Muslim Brotherhood, and ISIS. The U.S. has met ever more extreme behavior from Ankara with a combination of denial and obsequiousness.

For example, the U.S. never sanctioned Turkey for its support for Hezbollah, Hamas, and the Muslim Brotherhood.

The U.S. didn’t penalize Turkey for its effective sponsorship of ISIS. For years, the Turks permitted ISIS to use their territory as its logistical base. ISIS’s foreign recruits entered Syria through Turkey. Its terrorists received medical care in Turkey. Turkey was the main purchaser of oil from ISI- controlled territory and there were repeated allegations that ISIS was receiving arms from Turkey.

And the U.S. turned a blind eye.

While many have expressed alarm over Turkey’s decision to purchase an S-400 surface to air missile system from Moscow, particularly given that Turkey has ordered 100 F-35s, all of which are endangered by the S-400, no U.S. official has taken any steps to expel Turkey from NATO.

The report of Trump’s conversation with Erdogan can be read in several ways. On the one hand, Trump urged Erdogan to “de-escalate” the operation in Afrin. Trump argued that the Turkish operation is harming the broader coalition campaign against ISIS in Syria.

Trump reportedly urged “Turkey to de-escalate, limit its military actions and avoid civilian casualties and increases to displaced persons and refugees,” as well as to “exercise caution and to avoid any actions that might risk conflict between Turkish and American forces.”

On the other hand, Trump was respectful of Turkey’s claim that the U.S.-supported YPG is linked to the Kurdistan Workers Party (PKK) in Turkey, which Turkey says is a terror group, and which the State Department has listed as a terror group.

The YPG has been the US’s most loyal and effective partner in the battle against ISIS in Syria. The US rejects Turkey’s allegation that the militia is a terror group. Still, Trump reportedly agreed that the PKK is a terror group and the White House’s statement regarding the two men’s conversation said the US seeks “regional stability and combating terrorism in all its forms,” including ISIS, al Qaeda, Iranian-sponsored terrorism and the PKK.

So what was Trump’s message?

Trump’s conversation with Erdogan appeared to be an attempt to bridge the yawning gap between the US’s policy of supporting and working with the Kurds in Syria and its deference for Erdogan and his regime.

The read-out of their conversation also reflected the distinct possibility that the Trump administration is implementing a sophisticated strategy for contending with Erdogan’s Turkey and its open and growing hostility to the US and its allies.

While it is true that Turkey’s military is second only to the U.S. in size among NATO allies, the state of the Turkish military is atrocious. As former Pentagon official Michael Rubin from the American Enterprise Institute wrote this week in the Washington Examiner, Erdogan has gutted his armed forces in the wake of the failed military coup against his regime in July 2016.

Forty percent of Turkey’s senior officer corps has been purged. A quarter of Turkish pilots are in prison. Turkey has twice as many F-16s as trained pilots.

Turkey’s performance in combat in Syria has been abysmal, from the very earliest stages of the war. Rubin noted that in 2012 Syrian forces downed a Turkish F-4, and Kurds have downed Turkish helicopters.

None of this has escaped the Pentagon’s notice.

Last summer, as the U.S. launched its campaign to oust ISIS from its self-declared capital in Raqqa, Erdogan told the Americans that he would deploy his forces to fight alongside U.S. forces in Raqqa if the U.S. agreed to ditch the Kurdish YPG. The U.S. refused. Washington opted to side with the Kurds.

According to a report in the Washington Examiner, the Pentagon has a low opinion of Turkish capabilities. Turkish troops lack “the training, logistics and weaponry to successfully launch the siege of a fortified and well-defended city.”

On the other hand, the Pentagon assessed that the YPG were up to the task of assaulting and destroying ISIS forces in Raqqa. And as the battle of Raqqa demonstrated, they were right.

Rubin wrote that the Kurds in Afrin may well defeat the Turks.

So far, the Turks initial push has been unsuccessful.

While the U.S. has consistently treated Erdogan with respect, it has also sought to diminish U.S. dependence on Turkey.

Consider the issue of the NATO airbase at Incirlik, Turkey.

The Turks view Incirlik as their insurance policy. NATO air operations in Syria are coordinated from Incirlik. Most of the anti-ISIS coalition warplanes are based there. So long as NATO is dependent on Incirlik, so the thinking goes, Turkey can behave as abominably as it wishes.

So it was that following the failed coup in July 2016, Erdogan shut down Incirlik and paralyzed the coalition campaign against ISIS.

Erdogan failed to realize that his actions forced NATO allies to reconsider Turkey’s role in the alliance.

The U.S. responded to Erdogan’s move against Incirlik by expanding its air operations in Romania. And last summer, Germany’s Die Welt reported that the German military had identified eight alternatives to Incirlik, including three sites each in Kuwait and Jordan and two in Cyprus.

So while the stated policy of the U.S. towards Turkey is to continue to treat Turkey as an ally, the unstated U.S. policy is to bypass Turkey and render it irrelevant militarily while diminishing its capacity to harm either the U.S. or its allies.

This unstated policy is evidenced by the way the Pentagon responded to Turkey’s invasion of Afrin. Rather than disavow the plan to build a Kurdish border protection force, the Pentagon doubled down, and simply relabled it a “local security force.”

Pentagon and Central Command spokesmen and commanders also praised the Kurds for their key role in the campaign against ISIS.

“Our [Kurdish] partners are still making daily progress and sacrifices, and together we are still finding, targeting and killing ISIS errorists intent on keeping their extremist hold on the region,” Major General James Jarrard, the commander of Special Operations forces in Iraq and Syria, said in a statement.

It “distracts from the international efforts to ensure the defeat of ISIS. This could be exploited by ISIS and Al-Qaeda obviously, that we’re not staying focused on them right now,” Mattis said.

The U.S. has no interest in an open breach with Turkey. Any such breach will only strengthen Erdogan’s position at home and in the wider region. And given Turkey’s military weakness and the Kurds’ military power, America’s best bet is to keep its head down as Turkey insults it, while supporting the Kurds on the ground as they supplant the Turks as America’s partners in the field.

Rather than express dismay as Turkey moves further and further into the Russian-Iranian camp and away from the U.S., the administration can simply shrug its shoulders and let the chips fall. In this context, it makes sense that the administration did not try to prevent Turkey from purchasing the S-400 anti-aircraft system, which endangers the F-35 program.

Rather than trying to convince Erdogan not to walk out of NATO by rendering his weapons systems incompatible with NATO systems, last November, Assistant Undersecretary of Defense for International Affairs Heidi Grant simply let it be known that Turkey’s decision would have consequences for its planned purchase of 100 F-35s.

Speaking to Defense News, Grant said that the Turks “are a sovereign nation. They can choose to go with other partners. But I have made it very clear that it makes it a little more difficult for our partnership as a coalition because we will not be interoperable. As of right now, our current policies are, we would not be interoperable with Russian equipment.”

Turkey’s invasion of Afrin, like so many of its other actions in recent months and years, make it clear that it can no longer be considered a U.S. ally.

And a close examination of the Trump administration’s actions and statements indicate that not only is the U.S. no longer treating Turkey like an ally. It is also taking steps to neutralize the threat Turkey poses to American interests while cultivating a new alliance with the Kurds that will survive Turkey’s current slide into irrelevance and grow stronger in the coming years.