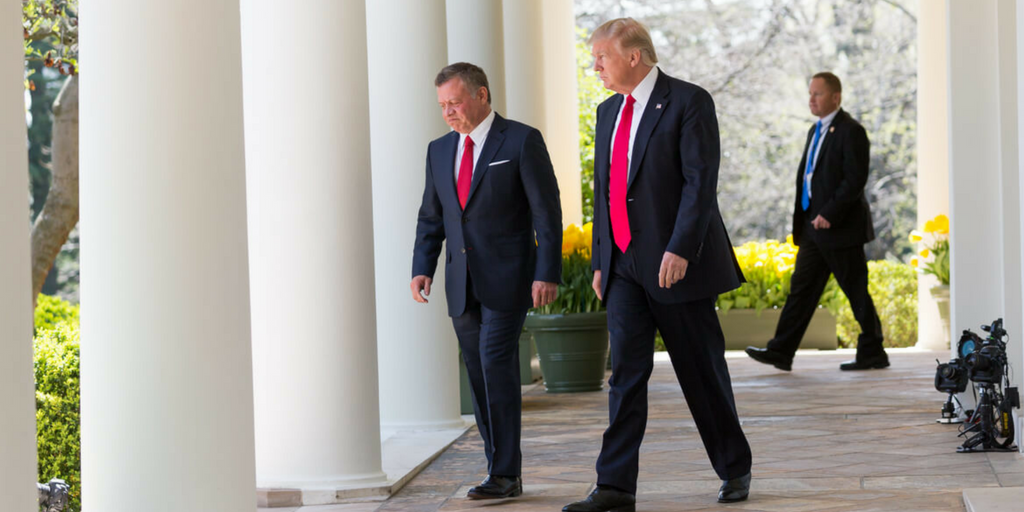 These are  merely a small sample of the international media coverage of the  wide spread unrest and protests against new IMF mandated austerity measures, that rocked the kingdom of Jordan  last month. They raised troubling questions as to the long term durability of the country’s incumbent monarchical regime and of the ruling Hashemite dynasty.

In response to public anger at the austerity measures, King Abdallah, the third member of the Hashemite line to rule Jordan since its inception in 1946, replaced his prime minster and ordered a review of the IMF prescribed reforms.

The jury is still out on whether these steps will placate public anger—and if so for how long. For, with persistently high unemployment (now hovering just under 20%), a national debt reaching 95% , rising inflation (the highest in years), sluggish growth and increasing poverty, Jordan faces daunting domestic socio-economic challenges.

However, beyond its own internal woes, the kingdom has been plagued by severe external problems  induced by the tribulations of others in the turbulent region in which it is located. Thus, the war in Syria–and earlier in Iraq– led to a deluge of refugees into the hapless country—straining its social services to their very limits.

None of this augurs well for future stability—and even if reports that most of the public ire has been directed at the government rather than the king are true—there seems scant room for optimism as to what is to come.

One of the possible repercussions of the challenge to the stability of the Hashemite regime, that has received meager attention in the public discourse, is the potential impact that political upheaval in Jordan may have on the feasibility of Donald Trump’s “ultimate deal” Mid-East peace plan which is rumored to be announced soon.

This is particularly pertinent with regard to the practicality and prudence of any territorial concessions this plan may call on Israel to make. After all, the identity of a prospective successor to the current incumbent regime in Amman is of tremendous consequence to Israel.

In the past, I have been at pains to convey, as graphically as possible, the crucial strategic significance of the territory designated for any envisioned Palestinian state—whatever its precise geographical parameters—have for Israel (see for example, here and here).

For the most part, this territory comprises limestone hills, that rise above Israel’s heavily populated coastal plain, and totally dominate the country’s major population centers (where around 80% of the civilian population resides and 80% of Israel’s commercial activity takes place).

The same is true for a large portion of Israel’s vital infrastructure systems and installations (military and civilian) – including many of the country’s military airfields, IDF bases and its only international airport, Ben Gurion; its major seaports and naval bases; much of its principle transportation axes (road and rail); important desalination plants and water conveyance systems; power generating facilities; as well as crucial centers of civilian government and military command.

All of these would be in range of cheap, primitive weapons, readily available to renegade non-state actors (read “radical terror groups”)—of the kind already being used against Israel from territories relinquished by Israel in the past—who could at will disrupt Israel’s ability to maintain any semblance of socio-economic routine in the heart of the country. Clearly, such weapons could be used from any territory to relinquished in the future, with or without the tacit approval of any potential Palestinian “peace partner”

Back to the Trump plan: It is portions of this strategically vital territory Israel may be called on to yield.

Jordan is immediately adjacent to this territory from the east. It is separated from it by only by the Jordan Valley, whose steep slope constitute a formidable topographical barrier between the Hashemite monarchy and the strategic highlands of Judea-Samaria, making the Valley itself a vital military asset.

Back to the “Ultimate Deal”

Clearly then,, for Israel, who controls Jordan  is a matter of critical importance—especially in light of the grim experience of the “Arab Spring”.

Indeed, despite all the grievances Israel may have regarding the repeated displays of diplomatic animosity by the current Jordanian regime, its seems highly implausible that any successor regime is likely to be more amicable. Quite the opposite. Barring some unforeseen development, pundits would generally agree that the most likely candidates to take over the reins of power are extreme Islamist elements, who would be more radical and more inimical to Israel by far.

Accordingly, when weighing any territorial concessions, it matters hugely whether Jordan is governed by a relatively moderate pro-western monarch or by an extremist Jihadist regime—whose territorial reach  extends from the Jordan River to the western fringes of Iraq.

Putting aside for the moment the weighty question of whether any Palestinian interlocutor can be trusted to honor any deal struck with him, it is clear that in the latter case, territorial concessions are likely to be far more perilous than in the former. After all, the territory conceded will be far more accessible to hostile anti-Israel elements and far more susceptible to incendiary incitement from Jihadi elements.

Planning for “the day after”….

For Israel, then, strategic prudence dictates that its working assumption must be that the Hashemite regime has a limited “shelf life”.

The forces of instability in Jordan are beyond Israel’s control, and although it might be able to attenuate them in the margins, it cannot determine their eventual outcome—or who will seize, or sustain, command of the country.

So, whatever advantages might be entailed in the continued rule of Abdallah,

Israel must prepare for “the day after” and tailor its ability to accede any territorial concessions in the Trump peace plan accordingly.