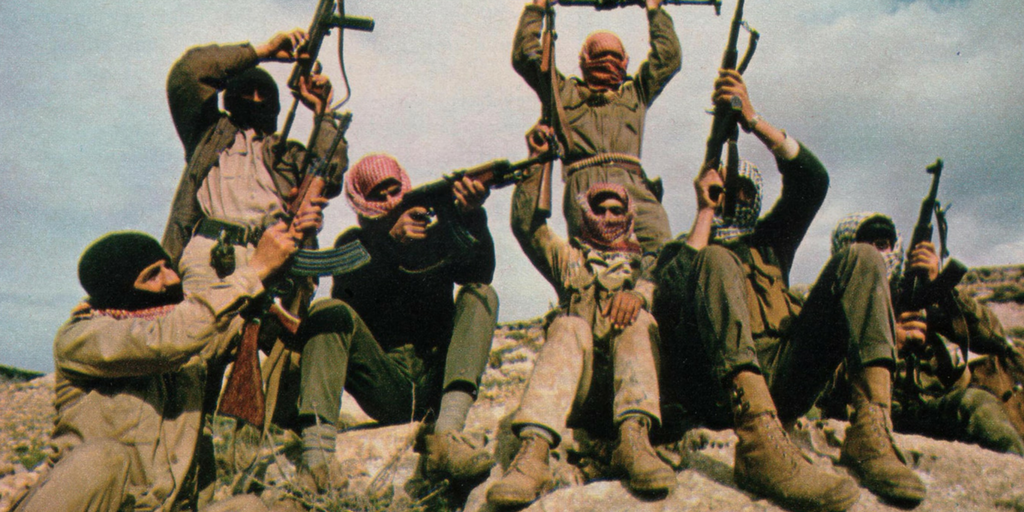 The entire issue of “Palestinian national identity” is a giant hoax, intended to be no more than a temporary ruse, until the Jewish hold on sovereignty in the Holy Land—any part of the Holy Land—is prised loose.

Enemy: [a person or group] that is antagonistic to another; especially: one seeking to injure, overthrow, or confound an opponent – Merriam-Webster Dictionary.

D-Day is approaching. The Arabs have waited 19 years for this and will not flinch from the war of liberation…This is a fight for the homeland – it is either us or the Israelis. There is no middle road. The Jews of Palestine will have to leave. We will facilitate their departure to their former homes. Any of the old Palestine Jewish population who survive may stay, but it is my impression that none of them will survive…. We shall destroy Israel and its inhabitants and as for the survivors — if there are any — the boats are ready to deport them– Ahmed Shukeiry, Yasser Arafat’s predecessor, in a premature flush of triumph, just days prior to the Arabs’ crushing defeat in June 1967, before Israel held a square inch of “occupied territory”.

The war between Arab and Jew for control over the Holy Land has dragged on for well over 100 years. For the last seven decades, the Arab effort has focused on an attempt to first thwart the establishment of a sovereign Jewish-nation state, and then, when that failed, to destroy it.

“…we shall enter Palestine with its soil saturated in blood”

Up until the early 1970s, the Arab war effort principally comprised an endeavor to obliterate the Jewish presence by means of conventional military might, involving frontal assault and invasion by regular armies of sovereign state-actors.

Indeed, this brutal credo is perhaps best illustrated by the late Gamal Abdel Nasser’s pre-war bravado, when he threatened the gory obliteration of Israel—within its 1948 frontiers: “We shall not enter Palestine with its soil covered in sand, we shall enter it with its soil saturated in blood” (March 8, 1965).

With their Judeocidal efforts repeatedly frustrated and after the failure of the coordinated surprise attack against the Jewish state in October 1973, it seems that the Arabs began to despair of this unvarnished and unabashed use of conventional martial force.

Gradually, a more multi-faceted strategy of aggression emerged, which no longer portrayed Israel as easy prey to be crushed by overwhelming Arab might. This time, the major emphasis was on the role of non-state actors (i.e. terror organizations) and offensive diplomacy, designed to isolate Israel in the international arena and portray her as an ogre-like oppressor, whose every action of self-defense to protect its civilian population is excoriated as an unjustified and disproportionate use of force.

Attrition not invasion
Thus, although the overriding objective remained the same, i.e. the eradication of the Jewish state, the method by which this was to be achieved shifted from cataclysmic destruction by Arab armies to a process of ongoing attrition by means of political, diplomatic and economic beleaguerment; and asymmetrical warfare launched by non-state-actors.

The former was aimed at discrediting and delegitimizing Israel internationally so as to curtail, even cripple, its ability to effectively employ it military prowess to confront the latter, which was aimed at weakening national resolve and undermining national morale.

The clear goal of this was to erode Israel’s national resolve and coerce her into accepting perilous concessions that would make her eventual demise easier to achieve in the future.

(For anyone tempted to believe that the Sunni Arabs have been significantly swayed from this long-term objective because of their fear of ascendant Shia power, I would suggest the astute analysis by the prominent scholar of Islam, Dr. Mordechai Kedar, who cautions against falling prey to this seductive illusion.)

In this ongoing endeavor of attrition, and in which Keidar warns that “For both religious and nationalist reasons, the Arabs…are incapable of accepting Israel as the Jewish State that it is”, a leading role has been assigned to the Palestinian-Arabs.

“Palestinian identity” as a temporary ruse

The notion of a distinct collective identity for the Arabs, whose origins trace (or allegedly trace) to mandatory Palestine (herein under “Palestinian-Arabs”) began to emerge in the mid-1960s. This, according to some senior East European intelligence sources, was the brain child of the now defunct Soviet spy agency, the KGB, with the express purpose of damaging US and Israeli interests. (For some reports on collaboration between the KGB and the PLO—Palestinian Liberation Organization—in Judeocidal terror operations, including the involvement of the previous and present PLO heads, Arafat and Abbas—see for example here, here, and here.)

But, of course, one does not necessarily have to lend credence to allegations of the KGB generated origins of the PLO to grasp that the whole issue of “Palestinian national identity” is a giant hoax, intended to be no more than a temporary ruse, until the Jewish hold on sovereignty in the Holy Land—any part of the Holy Land—is prised loose.

For that, all one needs to do is to examine the deeds, declarations and documents of the Palestinian-Arabs themselves.

Perhaps the most explicit – but certainly by no means, the only – articulation of Arab design was that of the oft-quoted, but ne’er-repudiated, Zuheir Muhsein, former head of the PLO’s Military Department and a member of its Executive Council.

Muhsein underscores, quite unequivocally and unabashedly, that the contrived collective identity of the Palestinian-Arabs as a “national entity” is little more than a flimsy and openly admitted pretext to advance the wider Arab cause of eradicating the “Zionist entity”. He openly confesses: “The creation of a Palestinian state is only a means for continuing our struggle against the state of Israel…. It is only for political and tactical reasons that we speak today about the existence of a Palestinian people, since Arab national interests demand that we posit the existence of a distinct ‘Palestinian people’ to oppose Zionism.”

He then starkly elucidated the rationale for a staged Arab strategy, and the crucial role the fictitious construct of a “Palestinian identity” had to play in implementing it: “For tactical reasons, Jordan, which is a sovereign state with defined borders, cannot raise claims to Haifa and Jaffa, while as a Palestinian, I can undoubtedly demand Haifa, Jaffa, Beersheba and Jerusalem. However, the moment we reclaim our right to all of Palestine, we will not wait even a minute to unite Palestine and Jordan.”

It is thus clear, that as a collective, the Palestinian-Arabs comprise the spearhead in the Arab struggle against Jewish sovereignty.

It would be a grave error to dismiss this as merely the opinion of a single, long-forgotten Palestinian leader. Indeed, it is a view that, over the years, has been expressed by many Arabs, Palestinian or otherwise, from  Farouk Kaddoumi to King Hussein.
More recently, it was baldly and brazenly articulated by Mahmoud Abbas himself, in his January 14 tirade before the PLO’s Central Council, where he spewed: “Israel is a colonial project that has nothing to do with Jews”.

Palestinian identity as a temporary anti-Israel ruse
But more important, it is a sentiment that permeates the entire Palestinian National Charter. For example, in Article 22, we read: “Zionism is a political movement organically associated with international imperialism and antagonistic to all action for liberation and to progressive movements in the world. It is racist and fanatic in its nature, aggressive, expansionist, and colonial in its aims, and fascist in its methods.” And of course: “Israel is the instrument of the Zionist movement”.

Moreover, this primal enmity is immutable and immune to the passage of time and predates the 1967 “occupation”. Thus, in Article 19 we read: “The partition of Palestine in 1947 and the establishment of the state of Israel are entirely illegal, regardless of the passage of time…”

But no less significant—and revealing—is the proviso, expressed in Article 12, regarding the transient nature of Palestinian-Arab collective identity: “The Palestinian people believe in Arab unity. In order to contribute their share toward the attainment of that objective, however, they must, at the present stage of their struggle, safeguard their Palestinian identity and develop their consciousness of that identity...”

What could be more revealing than that?

It was eminent social psychologist, Kurt Leven, who wisely observed that: “There is nothing so practical as a good theory.” After all, action without comprehension is a little like swinging a hammer without knowing where the nails are—and just as hazardous and harmful. In this regard, good theory creates understanding of cause and effect and hence facilitates effective policy.

Accordingly, to devise effective policy to contend with abiding Arab enmity, Israel must correctly conceptualize the conflict over the issue Jewish sovereignty in Holy Land.

In this regard, it should painfully clear that the conflict is one between two irreconcilable collectives: A Jewish collective and an Arab collective—for which, today, the Palestinian-Arab collective is its operational spearhead.

An implacable enemy, not a prospective peace partner
To underscore the crucial importance of this seemingly harsh assessment, I would invite any Israeli to consider the consequences of Jewish defeat and Arab victory. A cursory survey of the gory regional realities should suffice to drive home the significance of what would accompany such an outcome. Accordingly, only once a decisive Jewish collective victory has been achieved, can the issue of individual injustice and suffering in the Arab collective be addressed as a policy consideration.

Indeed, had the imperative of collective victory not been the overriding factor of the Allies’ strategy in WWII, despite horrendous civilian causalities that it inflicted on the opposing collective, the world might well have be living in slavery today.

In weighing the question of the fate of individual members of the opposing collective, it is imperative to keep in mind that, while there are doubtless many Palestinian-Arabs with fine personal qualities and who wish no-one any harm, the Palestinian-Arab collective is not the hapless victim of radical terror groups. Quite the opposite. It is, in fact, the societal crucible in which they were forged, and from which they emerged. Its leadership is a reflection of, not an imposition on, Palestinian-Arab society.

The conclusion is thus unavoidable: The Palestinian-Arab collective must be considered an implacable enemy—not a prospective peace partner…and it must treated as such.

Accordingly, the provision of all goods and services that sustain it must be phased out over a clearly defined period of time. After all, what is the morality of sustaining your enemy if that only sustains its ability to wage war against you—prolonging the suffering on both sides!

Recognizing enmity is realism, not racism

These are, of course, harsh policy prescriptions, but at the end of the day, they will be unavoidable. Elsewhere, I have set out the principles for extricating the non-belligerent Palestinian-Arabs from the severe humanitarian predicament they are likely to precipitate—chiefly by means of generous grants for relocation/rehabilitation in third party countries, out of the “circle of violence”.

Of course, the crucial point to realize here is that even the most moral and democratic societies can have enemies.

Recognizing such enmity—and the policies required to repel it—is not racism. It is merely realism.