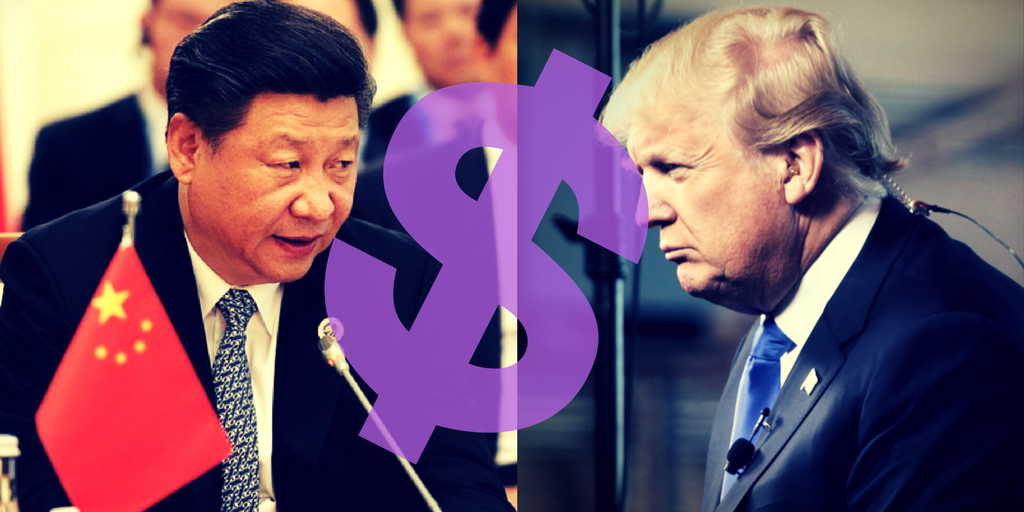 The current trade war underscores China’s role as the number one geopolitical competitor to the U.S. The Trump administration, with the support of the Federal Reserve Bank (FED), has embarked on a plan to economically defeat China. Back in April, President Trump could not deny that in the midst of a trade war that ‘there won’t be a little pain’ but predicted the U.S. will ‘have a much stronger country when we are finished’. But, at a rally last week in Montana, President Trump confidently stated ‘The war was lost on trade many years ago… but now we’re gonna win it and because we have all the cards’. This was somewhat puzzling as China has been slowly devaluing the yuan over the past two months and has withheld implementing its biggest card (the sale of its U.S. treasury holdings).

Tariffs
Last year, the U.S. posted a $375.6 billion deficit in goods with China with a large segment due to computer and electronics imports. In addition, an often-overlooked cause of this trade deficit is the manner in which China acquired its technology. A recent internal investigation found Chinese theft of American intellectual property costing between $225 billion and $600 billion annually. American trade officials cited the Chinese government’s method for acquiring valuable trade secrets as motivation for additional tariffs. The NY Times outlined how China stole designs from Micron Technology to enable it to build a $5.7 billion microchip factory. President Trump has effectively stopped prior administration’s ‘sellout’ policy of allowing Chinese purchases of strategic U.S. assets. While the Chinese government currently owns approximately $1.18 trillion of U.S. treasuries, any chance to swap this debt to equity and effectively colonize the U.S. is virtually zero.

Tax Cuts
The Tax Cuts and Jobs Act of 2017 signed into law by President Trump last December has met optimistic expectations as revenues from federal income taxes were $76 billion higher in the first half of this year, compared with the first half of 2017. It may be why President Trump recently hinted at a second phase of tax cuts that would involve a further reduction in the U.S. corporate tax rate and more stimulus for the middle class. One of the consequences of this tax cut have been greater budget deficits. While undoubtedly a long-term concern, the short-term results have yielded great benefits.

The FED
Large budget deficits, a trade war with China are being coordinated with the policies of the Federal Reserve. As summarized by a report from Palisade Research:

Clearly, the Trump administration views China as a greater threat to US interests than the Federal Reserve Bank at this time. As a candidate, President Trump had harsh words for Wall Street such as ‘I know Wall Street. I know the people on Wall Street…. I’m not going to let Wall Street get away with murder. Wall Street has caused tremendous problems for us.’ and ‘I don’t care about the Wall Street guys… I’m not taking any of their money.’. He even tweeted about the importance of auditing the FED. To date, his administration has not matched his prior rhetoric as they openly sided with banks and waived punishment over prior crimes. While some would question any type of coordination with a central bank, the President obviously does not share any such rigid ideology to constrain him. Still, alliances can be transitory and there is nothing to preclude the Trump administration from shifting policy at a later date.

China’s Options
We learned a few weeks ago that in fact Russia sold off half of their U.S. treasury holdings in the month of April. This coincided with a spike of 35 basis points on 10-year treasury bond yields. Perhaps, this was a test in preparation for a larger future sell-off. A treasury sale by the Chinese government could potentially have a devastating impact on the U.S. economy. Note that seven out of nine previous yield curve inversions have preceded a recession.

While China has launched the heavily anticipated yuan oil futures contract, it has not been implemented by Saudi Arabia as of yet, thereby delaying the death of the petrodollar.

Conclusion
So, the immediate goal for the U.S. is to starve China of US dollars until it makes satisfactory concessions. There have been reports of China’s economy slowing. Historically, the initiation of trade wars is bad economic policy. However, this unconventional strategy may be the only way for the U.S. to economically defeat China.
If this plan does not work as well as the President thinks it will, it could spur more people to question the current system of debt and centralized banking. The answer to what replaces the current system is anyone’s guess.