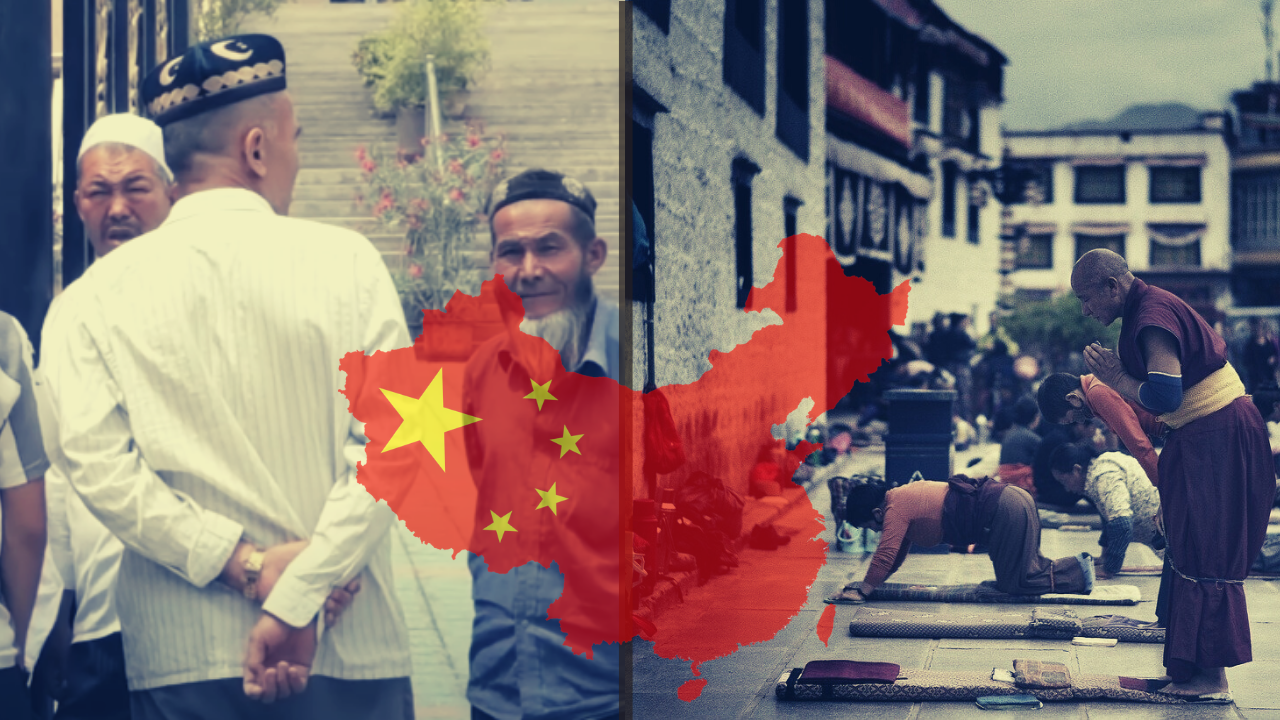 China under the PRC officially took over Tibet in October 1951. Tibet’s leadership including the then young Dalai Lama fled south into India, after a mass uprising in 1959, where the Tibetan government in exile still remains. Since the Chinese Han takeover of Tibet almost 70 years ago, the CCP run China has decimated the indigenous culture, transferring millions of ethnic Han into the occupied territory. More than that though, the CCP has continued to completely erase Tibetan history.

The following numbers are provided by Tibet Office: “1.2 million Tibetans, one-fifth of the country’s population, died as a result of China’s policies; many more languished in prisons and labor camps; and more than 6000 monasteries, temples and other cultural and historic buildings were destroyed and their contents pillaged.”

In 1987 the Western world, through grassroots efforts, launched the Free Tibet movement. The movement gained steam globally and by the 1990s there were international campaigns. Yet, as the CCP has continued to establish China as the indispensable economic anchor for the whole world, the same liberal media who championed the Tibetan cause has grown increasingly silent.

The Uyghurs Are Targeted For Annihilation

There are an estimated 12 million Uyghurs in North West China. They are a Turkic related Muslim people who migrated to Xinijang centuries earlier. Despite CCP claims, there are said to be more than 1 million Uyghurs in “reeducation camps” whose real aim appears focused on wiping out Uyghur culture – total cultural genocide.

Beyond the more than one million Uyghurs in what can only be considered concentration camps, Uyghur women are forcibly having their hair cut to sell on the global market and Uyghurs are forced to have their organs harvested where they are sold back to rich Muslims seeking an organ transplant.

Besides the open brutality, Uyghurs are on a basic level seeing their religious lifecycle events watered down in a very forceful way as a means of slowly destroying their culture.

Timothy Gross writes the following in China File about his experiences amongst the Uyghur:

“Important lifecycle rituals—baby-namings, circumcision, funerals, and weddings—provide opportunities for devout and casually religious families alike to strengthen connections. These ceremonies recommit the community to a religious path while forging and reinforcing kinship bonds between relatives (oruq-tughan), neighbors (qoshna), and friends.”

“Currently, however, these rites—known generically in official Chinese sources as the “four activities” (si xiang huodong, 四项活动)—demand the overbearing presence of the state in a formalized process referred to as the four applications, four delegations, and four receipts. According to this policy, families intending to hold naming ceremonies, circumcisions, funerals, and weddings must first file an official application. Then an official from the village Party branch will accompany religious clerics to the event, which the Party branch documents in a receipt.”

“Officials reward such mandatory invitations with monetary gifts. Work teams in one village dole out 200 renminbi for each naming ceremony, 100 renminbi per circumcision, 200 renminbi per wedding (second marriages are not eligible), and 500 renminbi per funeral. If the deceased was a Party member, officials increase the condolence payment to 1,000 renminbi. Families become ineligible for monetary gifts if they are deemed to have engaged in “extremism” or have a family member labeled as “targeted population.” If family members exhibit a bad attitude or perform poorly at work, or a Party member does not play a role in the ceremony, they are given reduced gifts. Although the modest financial support may be welcomed by some families, these payments act as what political communications expert Jennifer Pan has termed “repressive assistance,” that is, benefits that increase contact between the state and targeted groups and serve as a starting point for ideological transformation.”

Han-Centrism At The Heart of China’s Cultural Decimation Program

The Han, who make up 92% of China have been undergoing a form of hyper nationalism, which has transformed their nationalism into a virulent xenophobia. Han nationalism has been used as a tool to wipe out and colonize Tibet, Xinijang (home of the Uryghurs), and Inner Mongolia.

“The origins of Han-centrism are deep within China’s history, it is not a modern phenomenon. It has been manipulated of course, as you have observed, by Xi Jinping and historically by the Communist Party of China. So, we see many examples of this in the present crisis with the Wuhan virus. We see the Chinese have been blaming many other countries, including the US- they claim the US army brought the virus to China or that it originated in Italy first. This is in keeping with the Han-centric belief that China does no wrong and cannot make mistakes and that any problems it face are of the responsibility of other people and nations.”

The Han are encouraged to move to regions that were conquered in the 20th Century and either spread sinification as is the case of inner Mongolia or like Tibet and Xinijang aid in a total erasure of the indigenous culture that is there.

Han-Centrism or nationalism has increased in recent years under Xi Jiping and has been the foundation for the current government’s attack on organized Western religions like Islam, Christianity, and Judaism.

Han Nationalism has now been fused with the CCP’s global agenda and is the primary driving force behind the CCP’s hegemonic aspirations around the world. The assumption by globalists and corporate leadership is that an open China would pacify nationalist ambitions, but in the last decade or two they have only fueled them.

The current push to reengage Beijing, if and when President Trump leaves office, feeds the unrestrained urge by the CCP to continue their expansion. The Han Nationalism that has now propelled the Xi Jinping leadership is being near worshiped by those on the globalist left. This is not surprising. For years the left has run an all out assault on traditional religion – a near atheistic driven attack. The CCP, built with atheism at its core sees eradication of traditional religion as a core value.

Ultimately, as the Western world increasingly becomes more and more dependent on Chinese products for its own feeling of self fulfillment, it is essentially supporting wholesale genocide of ethnic populations that historically speaking were never under Chinese rule.

The globalist left likes to pride itself on liberalism and tolerance and yet when it comes to China it looks the other way. Gone are the days of mass protests for Free Tibet that swept the 1990s and drew in famous entertainers.

Ironically, President Trump, the very man who the left claims is “Hitler incarnate” signed the Uyghur Human Rights Policy Act this past June. Trump said that act “holds accountable perpetrators of human rights violations and abuses such as the systematic use of indoctrination camps, forced labor, and intrusive surveillance to eradicate the ethnic identity and religious beliefs of Uyghurs and other minorities in China.”

The Uyghurs and Tibetans are a message for the world, that placating genocidal regimes no matter how economically “indispensable” they are for the world, never ends well. The Jewish people were also at the mercy of a supposed “indispensable” nation, Nazi Germany, whose leader graced the cover of Time Magazine. Unfortunately, more than 75 years later the world has decided to put profits ahead of stopping the rising dragon. Will global leadership wake up before it’s too late? If the US elections are any indication, it does not seem likely.

Previous Post This Chanukah, It Is Time To Finally Break The Chains Of The CCP And Their Global Partners