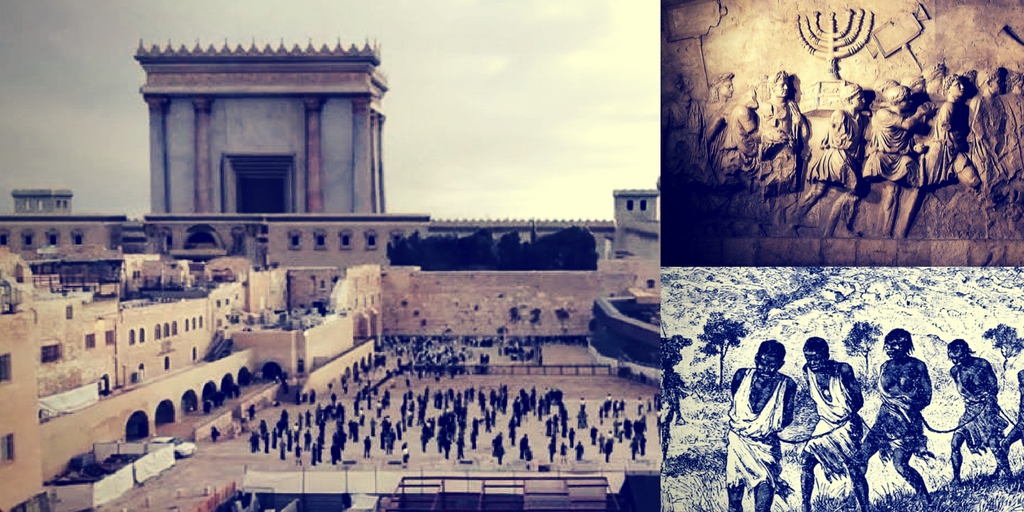 Every year we we find ourselves at this time again.  The darkest moments in Jewish history and really the collective Israelite history can be boiled down to the 9th of Av, the day of mourning of the destruction of the two temples that stood at the exact location of today’s Dome of the Rock.

Exile cannot be quantified and there is no other people in the world who have been exiled, enslaved, and brutally oppressed as much as Israel.  We have been scattered to the four corners of the world and only because the Almighty deemed it time to come home, did Jews begin to stream back to the Land of the Israel.  Liberation was achieved against the British and subsequent wars of defense and liberation of our homeland were also fought and won.  All of these events occurred against impossible odds.

Yet, despite Israel’s standing there is a vacancy in our nation and our hearts. The location of the Temple is the point where the world was created from.  It is the point where Abraham our Father binded Isaac.  Kabbalah teaches the temple mount is point that connects this world to the upper worlds.  The Almighty entrusted his Children with this spot.  We built two temples there and both times they were destroyed and we were exiled.  The first exile brought us to Babylon, Egypt, and Syria.  Some Israelites returned 70 years later to rebuild the Temple and establish sovereignty, but many stayed in exile and built communities across the Middle East and Africa.

When the Romans destroyed the second Temple, forcing us into exile again, many fled or were sold into slavery into Africa and many of us were brought to Rome and other parts of the Roman Empire in Europe.

Our sages teach us the second Temple was destroyed due to intramural hate and only tremendous unity can rebuild it.

The prophet Ovadia clearly states that although the people of Israel were scattered they will return at the end of the days and mentions both the house of Yosef returning from France and the house of David from Spain.

We are clearly in the middle of this as we speak.  But there are other locations.  The prophet Isaiah mentions Cush. We have already witnessed our brothers and sisters return from Ethiopia, but what of the other Israelites found there? Millions fled or were sold into slavery to Africa after the destruction of both Temples. These Jews are only supposed to resurface at the end of days, after we the ones exiled into Rome trigger the awakening by returning first.

The Almighty has hidden from us our brothers’ location, but now it is clear at the end where they have been. The Jews who went into Egypt with Jeremiah and the Jews who were sold into slavery into Africa eventually found their way to the Gulf of Guinea mainly in Biafra. They eventually became known as the Igbo.  There they kept circumcision and the dietary laws as espoused in the Torah, but something happened.  First Islam came and began to forcibly convert the non-Jewish tribes to the North.  These tribes fought against the Jewish tribes living in Mali.  Many of these Jews fled south merging with the Igbo and other Israelite tribes already there and still others were lost and blended into non-Jewish African tribes. Yet, many stayed true to the Torah as much as possible.

When the Europeans arrived to missionize and enslave the inhabitants living on the coast of the Gulf of Guinea they found that the Igbo of Biafra and many other tribes in the coastal region kept certain laws from the Torah.  In their minds this would not do.  The solution was to enslave and deport, decimating what was there and nearly erasing the memory of what once was.

The Igbo and their related brethren were brought to America. So many Igbo were brought there that it is said that up to 60% of African Americans can trace at least one side of their family to being Igbo. This explains the affinity both  Jews of European descent African Americans had with one another during the Civil Rights era.

What happened to the Igbo is not dissimilar to the Spanish and Portuguese Jewry who were either forcibly converted or chased into the New World where they started to forget who they were.

Now there is a great awakening and the movement to reverse the enslavement of our past is happening.  In Biafra, where the Igbo still reside, synagogues are being built, prayers are being said, and Torah is being learned.  There is a struggle to free the Igbo from the mental slavery of the past.  This struggle has taken many forms.  Politically it has inspired the free Biafra movement whose leader Nnamdi Kanu, rots in jail for no apparent reason than he acknowledged his Hebraic origin and sought to activate it in order to free his people.

Unity will bring the Temple.  Understanding that we Israelites were exiled and enslaved and brought to far flung places. Exile has been brutal to us yet we are awakening and realizing all of us together can unify and return the Holy Temple to the Mount Moriah. All of us black, white, yellow, brown can one way or the other trace ourselves back to the Land from which we were taken.