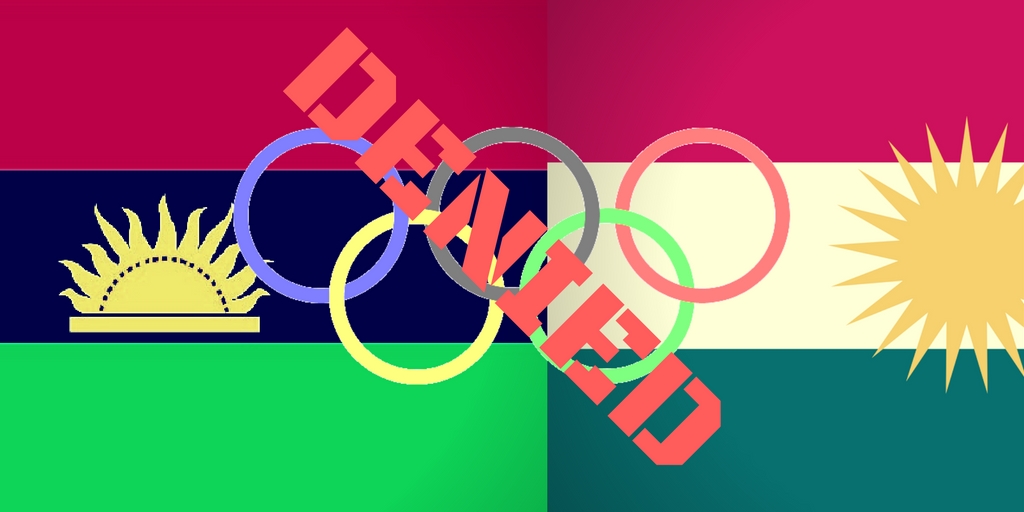 With eyes focused on the Rio Olympics, the hypocrisy of who gets to participate as a country or even a territory cannot be ignored. When real nations like Kurdistan, Biafra, and even the Lakota are not present because of political concerns, while non-state former terrorists known nowadays as “Palestine” get a team there is a sort of Alice in Wonderland moment at hand.

The same leftist organizations that are so intent on demonizing Israel and relishing in the inclusion of one of the biggest cheerleaders of anti-Jewish incitement in the world fall silent when it comes to the lack of recognition for the truly repressed nations.

Kurdistan is not only an autonomous zone in northern Iraq, but is the largest group of people never to have a defined homeland. With 14.5 million Kurds in Turkey, 6 million in Iran, another 6 million in Iraq, and 2 million in Syria, the Kurds are busy dying fighting ISIS and getting the shaft by the international community. While the Olympics may just be a sporting event, symbolism matters.

The real reason why Kurdistan has never had an Olympic team and will probably be denied one for the forseeable future is Turkey. Erdogan’s nemesis or bogy man is the Kurdish independence movement. Erdogan has used it at opportune times to deflect opponents and consolidate power. With Turkey’s population standing at 76 million, Kurds make up nearly 20% of the total.  This means any weakening towards recognizing a free Kurdistan could potentially rip Turkey apart.

Biafra, a nation in southeast Nigeria was forced by the British colonial masters to merge with Lagos Colony, and Hausaland in 1914 in order to create what is no known as Nigeria.  However, the British put a caveat in the decree that merged the three areas together. The charter would only last 100 years. Since 2014 Biafra has had a legal right to pull away from Nigeria.

One of the biggest reasons why Biafra has not seceded from Nigeria is it still remembers the Biafran war for independence in 1967-1970 that failed miserably and ended with between 3 to 6 million dead Biafrans. Not only that, but Britain is vehemently against an independent Biafra, because it would lose much if its control over Nigeria’s oil, which resides in Biafra as well as the Niger River delta where most of the oil is brought through.

The Lakota and other first world people have never been on the radar for going to the Olympics. Accepting them as an autonomous region would be a blow to America’s artificial narrative of protector of freedom and human rights. Afterall, the United States government has been trying to settle the Lakota’s outstanding claim to their land since the Treaty-of-Fort Laramie in 1868 and the government’s own violation of the treaty in 1877 (through the seizure of the Black Hills). So real is their case, the USA has repeatedly tried to offer a financial package, but the Lakota have turned it down demanding only the return of their land.

With these very real cases of national claims being denied, it is beyond strange that the world still sees it just to focus on a group of people who for the most part were coerced into migrating to the Land of Israel just over a century and half ago and have no defining mutual characteristic among them other than the rampant desire to kill Jews. Palestine was synonymous with Israel until the late arch terrorist appropriated the name in 1964. Until then Arabs of the Levant were Arabs.

In order for the Olympics to shake the corporatist wrappings they have become seen as representing, allowing representation to real national entities instead of false one, would be a great place to start the games’ rehabilitation.