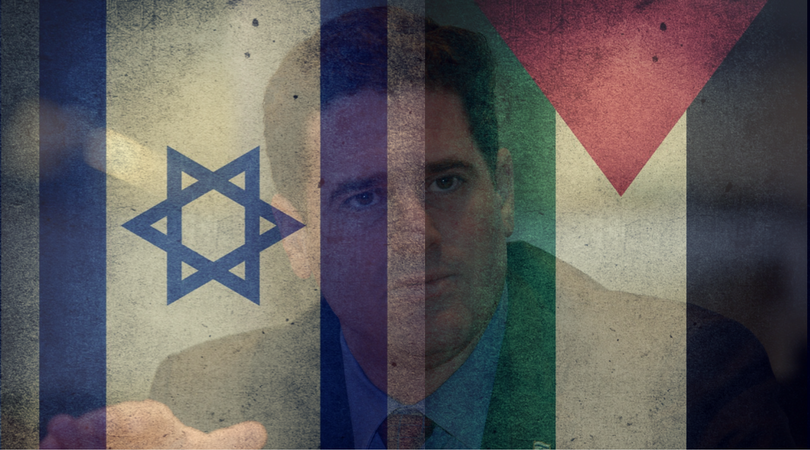 “There is no reason, concretely and in principle, why Jews should not be able to live in a future Palestinian state”–  Ron Dermer, Israel’s Ambassador to the United States, July 28, 2016.

Only two things are infinite, the universe and human stupidity, and I’m not sure about the former  – attributed to Albert Einstein

I realize of course that juxtaposing these two excerpts might seem to some to be an overly caustic castigation of our esteemed envoy in Washington. But things are getting out of hand.  In recent weeks, the Israeli public has been subjected to a barrage of imbecility from its leaders – with each statement/declaration/proposal attaining new levels of naked absurdity. It is an absurdity that must be exposed and expunged from the political discourse in Israel.

Cavalcade of the crackpot and the crazy

In past columns, I have discussed some of the more demented ideas that have been raised in the national discourse by prominent individuals and/or organizations as allegedly serious policy proposals.

For example, in “Gaza: A port is no panacea for poverty” (May 27, 2016), I dealt with the harebrained and hazardous proposition made – among others, by Israel Katz, Minister of Intelligence(!) and Transport, to build a detachable port for Gaza on an artificial off-shore islet.

In “Imbecility squared: Parts 1 & 2” (June 10 &17, 2016), I wrote of the perils inherent in the “plan” advanced by a group of over 200 former senior security officers  called “Commanders for Israel’s Security” to convert the areas of Judea-Samaria into a giant South Lebanon, unilaterally transforming “disputed territories” into “occupied” ones.

Likewise,  in “Utterly unconscionable”,  (July 1, 2016),  I detailed the fatal folly of the so-called “reconciliation” accord, concluded by the Netanyahu government with Erdogan’s Turkey, warning of its many ill-advised  defects – particularly giving the increasingly theocratic and tyrannical Islamist regime, closely allied to the Muslim Brotherhood, a firm foothold in Gaza.

So in some respects, Ambassador Dermer’s staggeringly stupid remark was merely another component in the continuing cavalcade of the crackpot and the crazy that has become the depressing norm in the conduct of Israeli politics.

But in some respects it was even more disturbing and detached from any grasp of reality.

Made at an event held by the S. Daniel Abraham Center for Middle East Peace at the Democratic National Convention in Philadelphia, the remark highlighted the impossible dilemma in which Likud-led coalitions have been trapped since Netanyahu’s ill-advised Bar Ilan Speech, in which he declared his willingness – in violation of his electoral pledges – to accept the possibility of Palestinian statehood.  Moreover, Dermer’s remark also reflected the dismaying degree by which the core values of Zionism have been obscured, eroded and forgotten

Sadly – but not unpredictably – the latter is an inevitable product of the former.

“Our hope of two thousand years will not be lost.

To be a free people in our own land, the land of Zion…”

Absent this component, the notion of Zionism is left bereft of any substantive content.

But this is precisely what Dermer’s remark is prescribing—and worse.

For it is not only suggesting that this core element of Zionism be set aside, but that, in fact, it be inverted. Perversely, this prospect of the sacrifice of Zionist essence is to be made at the altar of the disproven -but somehow never discredited, and certainly never discarded -political deity of “Two-States”.

So Dermer is utterly wrong—on all counts.

There is every reason – both in principle and concretely – why the notion of Jews living in a Palestinian-Arab state, under Palestinian-Arab sovereignty would be unacceptable. Indeed, his envisioned outcome was made all the more preposterous – even grotesque – by his raising the possibility that “settlers living deeper in the West Bank should, in the event of Palestinian statehood, be given the option of gaining citizenship in that state”.

But when we move from the realm of “principle” to that of the “concrete”, the notion that Jews should live in a future Palestinian state becomes even more bizarre and unthinkable.

“…there is a Jew behind me, come and kill him…”

For when Dermer envisions Jews being left to live in a “future Palestinian state”, we are not talking about some benign Judeo-philic – or even Judeo-neutral – sovereignty, but a regime nurtured by decades of Judeo-phobic hatred and filled with Judeo-cidal intent.

Indeed, both the Hamas Charter and Fatah Constitution call for the eradication of all the Jews and the elimination of every vestige of Jewish life between the Jordan River and the Mediterranean Sea-by force of arms.

So foremost among the “concrete reasons” for discounting the prospect of Jews living in some future Palestinian-Arab state is the rather “prosaic” one: The very tangible probability of them being torn limb from limb by some incensed mob, enraged by the very sight of their mere existence.

Indeed, the thought of leaving Jews – and Israeli citizens – to the tender mercies of a regime, that has demonstrated its true and heartless colors, is so appalling that it must be removed from the realm of acceptable debate before it gathers any currency.

Two things make raising this perverse possibility even more vexing. The first is that it was a clear slap in the face for the pro-Israel elements in the Republican Party, who had expunged the idea of the two-state formula from their party platform. The second was that it apparently was intended to mollify less supportive Democrats, still mindlessly obsessed with the macabre dogma of establishing yet another homophobic, misogynistic Muslim-majority tyranny as the panacea for all the ills of the Middle East.

It is a sad spectacle to see Israeli diplomacy so mired in the two-state morass of its own making that it has lost any semblance of coherence, thus inevitably resulting in the kind of anti-Zionist declarations made by Dermer.

Instead of channeling all efforts into removing the idea of Palestinian statehood from the discourse, Israeli diplomacy insists on sustaining it. By paying formal lip service to the doctrine of two-statism Israel  has ensnared itself on an irresolvable contradiction – committed to the establishment of a Palestinian state, on the one hand; yet unable to make the perilous concession to allow its implementation, on the other.

It is this impasse that begets the kind of outlandish utterances made by Dermer. Instead, of making it clear that—absent some wildly implausible best-case scenario, with no realistic basis in fact – a Palestinian state is incompatible with its the long-term survival as the nation state of the Jews, Israel finds itself scrambling to square the circle – trying to defend an indefensible policy with indefensible arguments…

Instead of conveying to the world—and the Democratic Party – that Israel cannot relinquish – “in principle or concretely” – any portion of Judea-Samaria to Arab sovereignty, Dermer is forced into contorted politically correct gobbledygook – attempting to justify the construction of Jewish communities not on the basis of moral and historical rights – but on the basis of their possible future transfer to Arab rule.

Only the most fevered of minds

Today, only the most fevered mind can suggest that the establishment of a Palestinian state in the hills that command the heavily populated coastal plain is even remotely in Israel’s national interest.  Not only would the Jews left behind in the Palestinian-Arab state be in deadly danger, so would those inside the shrunken Jewish state.

To grasp the veracity of this caveat, all one needs to do is look at the outcome of the failed experiment of trying to foist self-rule on the Palestinian-Arabs in Gaza.  After three large scale military campaigns against Arab aggression since relinquishing the territory, and removing any remnant of Jewish presence there, Israel is again bracing for a fourth encounter.

Indeed, as time passes, instead of threats dissipating they intensify. Today, Israel is planning on surrounding Gaza not only with a 10 meter high wall above ground but a 10 meter deep one below it, to contend with the threat of attack tunnels. It not only recently completed a project to fortify over 10,000 homes in the communities adjacent to Gaza, providing them with newly constructed bomb shelters, but in the case of renewed fighting, plans to evacuate the civilian population in a 7 km swathe around the Strip.

Hmm!! Remember how they told you Israel had to leave Gaza because the “occupation “was… expensive??

Now imagine having to duplicate that effort, if like Gaza, Judea-Samaria were surrendered to Arab sovereignty.

Imagine if, instead of having to build a 10m barrier above and below ground along a 50 km. front, as in Gaza, Israel would have to do this along a 400-500 km front in Judea-Samaria.

Imagine if instead of having to fortify 10,000 homes, Israel would have to fortify hundreds of thousands…

But if the sheer-physical parameters are daunting, the socio-political processes inside Judea-Samaria are, if anything, more so.

In a new study, graphically entitled “The Fraying Palestinian Political Entity in the West Bank”, veteran Arab affairs analyst, Pinchas Inbari, paints a gloomy picture of socio-political realities in Judea-Samaria, and of the direction of the developing trends there.

He describes a society descending into inter-clan rivalry and gang violence against the backdrop of declining authority of any semblance of centralized governance. He cautions: “The Palestinian Authority is failing to control extensive parts of the West Bank. As a result, some districts of the West Bank are developing in different directions…accelerating the process of the PA’s disintegration…”

So there you have it.

Both bitter experience of past precedents and the dismal prospects of future trends portend ill for the two-state paradigm. To understate the case, its chances of success are slim and the cost of failure, grim. It therefore seems inexplicable that the Government of Israel persists in the shabby charade of supporting it.   Perversely, many holding senior office today built their political careers on opposition to Palestinian statehood. Yet now that their positions have been vindicated, they persist in feigning support for it.

The time has come to stop this masquerade

Instead of trying to artificially sustain the dangerous delusion of a future Palestinian state, coexisting in peace and prosperity with a Jewish state, instead of nurturing this ill-fated illusion among overseas audiences, Israeli diplomats should be engaged in efforts to apprise them of the fatal flaws of the failed doctrine of two-statism.

That – and not consigning Jews to Arab governance – is the true challenge of Israeli diplomacy today.