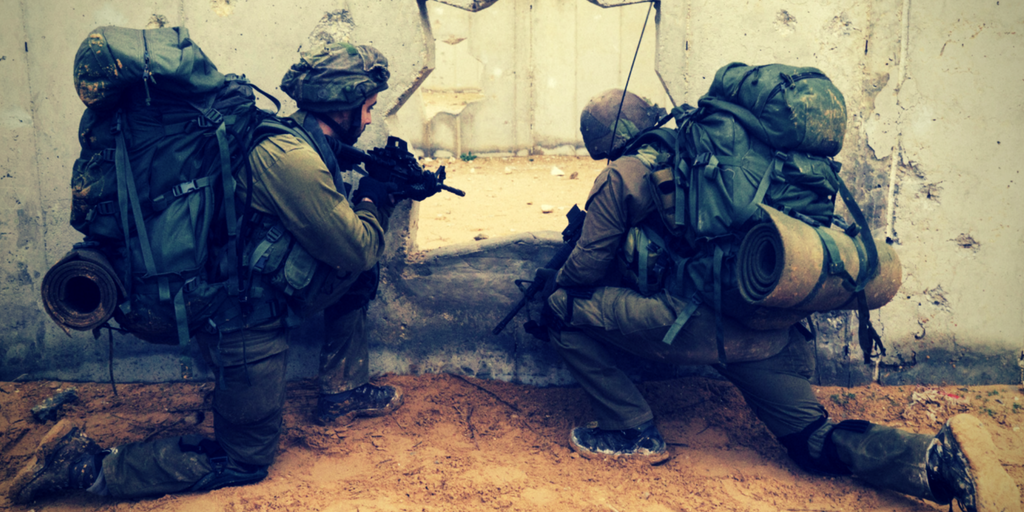 Has the IDF brass forgotten that they are soldiers, charged with providing military solutions to physical threats to the nation’s security; not sociologists, tasked with diagnosing the societal ailments of its enemies?

…the IDF General Staff has been insisting there is only one thing Israel can do about Gaza. According to our generals, Israel needs to shower Hamas with stuff. Food, medicine, water, electricity, medical supplies, concrete, cold hard cash, whatever Hamas needs, Israel should just hand it over in the name of humanitarian assistance. Every single time reporters ask the generals what Israel can do to end Hamas’s jihadist campaign, they give the same answer. Let’s shower them with stuff. – Caroline B. Glick, Who Leads Israel? June 1, 2018.

Israel’s security establishment continues to look for solutions to the situation in the Gaza Strip, as security sources on Monday warned about an approaching complete economic collapse in the Gaza Strip…Those sources pointed out that preventing a humanitarian disaster in Gaza is an urgent matter of national security for Israel. – David Isaacs, Israeli Defense Establishment Warns of Complete Economic Collapse in Gaza, Jewish Press, June 11, 2018.

We are still faced with the absolutely crucial problem of making the intellectual and imaginative effort not to project our ideas of common sense or natural motivation onto the products of totally different cultures… [People] assume that the light of their own parochial common sense is enough. And they frame policies based on illusions. Yet how profound is this difference between political psychologies and between the motivations of different political traditions, and how deep-set and persistent these attitudes are. – Robert Conquest, Reflections on a Ravaged Century, 1999.

Earlier this week, the Israeli security cabinet convened to discuss the humanitarian situation in the Gaza Strip. Thankfully, the meeting, which took place against the backdrop of the ongoing violence on the border with Gaza, did not produce any operational decision or any undertaking on the part of Israel to attempt to alleviate the situation in Gaza.

A recipe to enrich Hamas

However, the very fact that a security cabinet meeting took place at all to discuss how improving the humanitarian situation in Gaza could somehow contribute towards easing the security situation, is in itself disturbing and disappointing.

For the connotation that this clearly conveys is that (a) the violence is a result of the dire socio-economic conditions in Gaza, rather than obdurate Arab refusal to accept any semblance of Jewish political independence in any portion of the Biblical Land of Israel, regardless of its geographical contours; and (b) Israel bears responsibility for these dire conditions and hence, for the violence that they allegedly precipitate. Thus, according to this “logic”, it is incumbent on Israel to find ways to alleviate the socio-economic distress in Gaza as a form of “enlightened self-interest” to reduce the threats to its security.

This, of course, is an utter distortion of reality and, as I have been at pains to argue in my last two columns (see here and here), reflects a total inversion of causality. For it is demonstrably incontrovertible that the privation in Gaza is the result of, not the reason for, the incandescent hatred of the Jewish state. Indeed, any enhancement of the humanitarian effort will inevitably empower, enrich and entrench Hamas, which, invariably, will either physically expropriate much of any influx of goods, or impose taxation on them—and replenish its coffers to finance its nefarious activities.

Beyond the IDF’s professional purview

Arguably, one of the most disconcerting elements of the security cabinet meeting was that it seems to have been convened under pressure from senior IDF officers, who consider that a collapse of civilian infrastructures in Gaza was imminent, and such collapse would precipitate a severe security predicament for Israel.

This, in many ways, is an inappropriate overreach by the IDF, well beyond its professional purview.

For, although the IDF has admirably shouldered numerous domestic social tasks, which are usually beyond the range of duties other armed forces take upon themselves—such as providing educational frameworks for disadvantaged youth—it is nevertheless not a social welfare organization—especially when such welfare concerns hostile aliens rather than Israeli citizens.

Indeed, as the national defense force, its overriding responsibility is to deter external enemies from attacking Israel, or if such deterrence fails, to defeat them—preferably by preempting such attacks, or by decisively repulsing them.

But, it is one thing to deter one’s enemy from attacking because they fear the consequences of the response that attack will precipitate. It is quite another to cajole them into delaying attack, by offering benefits—especially if the delay is exploited by them to rearm, redeploy and regroup, only to initiate future aggression with enhanced capabilities at some later time of their choosing.

As someone who served for several years in operational capacities in the Israel security establishment, I have great respect for the ingenuity, dedication and sacrifice of the men and women who serve in it.

Moreover, the IDF and Israel’s other security services have shown extraordinary prowess in their ability to obtain detailed operational intelligence on the country’s adversaries, and to deal swiftly with specific targets.

Accordingly, it is no easy task for me to level criticism at those for whom I have a sense of genuine regard and natural comradeship. However, it is becoming increasing apparent that the Israeli security establishment is seemingly incapable of translating its indisputable and undisputed technical/tactical genius into clear and coherent strategic wisdom.

Of course, while it is true that national power is more than mere military might, the IDF is increasingly straying into realms which are outside its field of professional expertise and should be beyond its legitimate intervention.

Thus, as I lamented in my last column, in recent years—perhaps due to the professors and political credos they are exposed to during their academic studies—it appears that many in the senior echelons of Israel’s security establishment have forgotten that they are soldiers, charged with providing military solutions to physical threats to the nation’s security and not sociologists, tasked with diagnosing the societal ailments of its sworn enemies.

Both inappropriate and invalid

Indeed, not only are the IDF forays into the realm of sociology formally inappropriate, they are also substantively invalid.

After all, the grim state of affairs is not the result of any scarcity of international funding or Israeli largesse. In past years, Gaza has had an abundance of both –and has squandered them both, because—as a collective—its communal aspiration is not greater prosperity and material well-being for its individual inhabitants, but the physical annihilation of what is perceived as an enemy collective—the Jewish nation-state.

No amount of humanitarian aid can address this aspiration. Quite the reverse! Increasing it will only increase the drive to fulfil it.

It is beyond distressing that the senior echelons of the IDF seem oblivious of this. For it is a blatant violation of Robert Conquest’s caveat (see introductory excerpt) “not to project our ideas of common sense or natural motivation onto the products of totally different cultures.”

Indeed, it is to ignore “how profound is th[e] difference between political psychologies and between the motivations of different political traditions, and how deep-set and persistent these attitudes are.”

Of course, if one surveys the history of the last half-century, there does appear to be one way—and only one way—to alleviate the humanitarian crisis in Gaza. But it is hardly one that the IDF is likely to endorse.

For, alas, it entails…reinstating the “Occupation”.

Occupation as a humanitarian remedy??

After all, under Israeli occupation, societal conditions in the “West Bank”/Gaza soared beyond all recognition—only to plunge once it ended.

Last week, I urged readers to familiarize with themselves with an article, “What Occupation?”, by Prof. Efraim Karsh, formerly of King’s College, London, now director of the Begin-Sadat Center for Strategic Studies. It provides staggering statistics on the meteoric socio-economic development of the Palestinian-Arabs under Israeli administration.

It should be compulsory reading, not only for Israeli politicians, but for the senior echelons of the IDF. The following is a brutally condensed summary:

Karsh writes: “At the inception of the occupation, conditions in the territories were quite dire. Life expectancy was low; malnutrition, infectious diseases, and child mortality were rife; and the level of education was very poor. Prior to the 1967 war, fewer than 60 percent of all male adults had been employed, with unemployment among refugees running as high as 83 percent.”

He points out: “Within a brief period after the war, Israeli occupation had led to dramatic improvements in general well-being, placing the population of the territories ahead of most of their Arab neighbors.”

The improvement in employment was dramatic: “the number of Palestinians working in Israel rose from zero in 1967 to … 109,000 by 1986, accounting for 35 percent of the employed population of the West Bank and 45 percent in Gaza. Close to 2,000 industrial plants, employing almost half of the work force, were established in the territories under Israeli rule.”

Occupation as a humanitarian remedy?? (cont.)

Under Israeli “Occupation”, the Palestinians-Arabs made vast progress in social welfare: “… mortality rates in the West Bank and Gaza fell by more than two-thirds between 1970 and 1990, while life expectancy rose from 48 years in 1967 to 72 in 2000 (compared with an average of 68 years for all the countries of the Middle East and North Africa). Israeli medical programs reduced the infant-mortality rate of 60 per 1,000 live births in 1968 to 15 per 1,000 in 2000…

Karsh is not alone in assessing the contribution of Israeli administration to Palestinian development and welfare. In his Rivers of Eden, (Oxford University Press), Daniel Hillel, a scholar largely sympathetic to the Palestinian cause, noted that in agriculture the pattern was similar: “The Israeli occupation changed local agriculture profoundly. It introduced modern technology, including mechanization, precision tillage, pest control… It also introduced efficient methods of irrigation…especially drip irrigation. Consequently, output increased greatly, and farming was transformed from a subsistence enterprise to a commercial industry.”

Sadly, after 1993, when Israel relinquished control of Gaza to Arafat and his cronies, the socio-economic conditions deteriorated precipitously—until today we seem be perennially on the cusp of a humanitarian catastrophe.

Clearly then, as the last quarter-century shows, the Palestinian-Arabs have unequivocally demonstrated that they have failed the test of history, utterly unable to establish a viable self-governing entity. Moreover, since the IDF would certainly balk at the prospect of re-instating the “Occupation”—especially if it is indeterminate and open-ended, while we wait for Palestinian-Arabs to morph into something they have not been for the last century and show no sign of doing so in any foreseeable future, there is only one other alternative to alleviate the humanitarian crisis.

This is to fund the permanent relocation/rehabilitation of non-belligerent Palestinian-Arab individuals to third party countries, “outside the circle of violence” and free of the clutches of the cruel corrupt cliques who have led them into disaster after disaster for decades.

In this regard, the current humanitarian crisis is an opportunity—and should be recognized as such.

The time has come for Israel to seize the moment. Carpe diem!