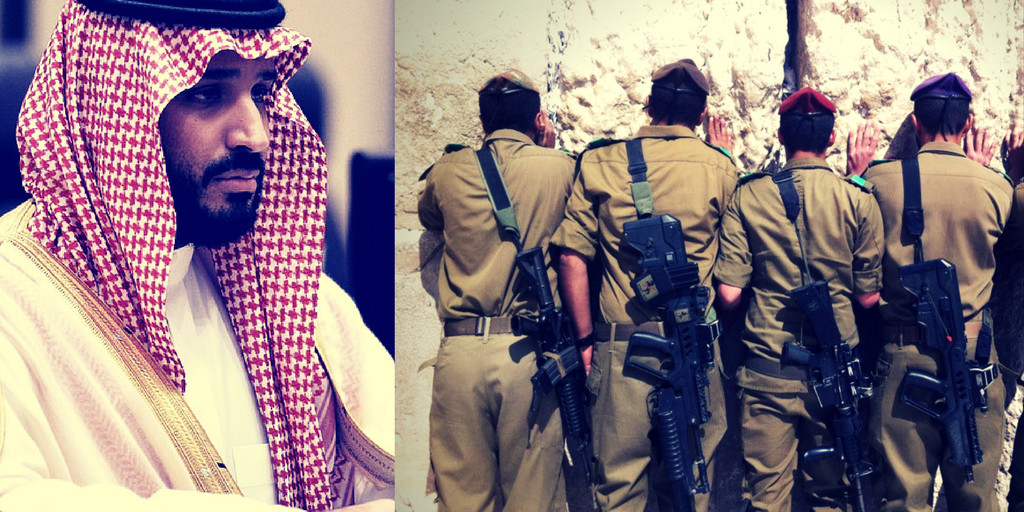 Rumors have been swirling over the past few days about what appears to be a secret visit by the Saudi Crown Prince to Israel.

“A prince from the Royal Court visited the country in secret over the past few days and discussed the idea of pushing regional peace forward with a number of senior Israeli officials,” the IBC reported, citing the Russian Sputnik media outlet.

This rumor was further strengthened by both Arab media and Israeli media claims.  While it is highly doubtful that the Saudi Crown Prince actually made a secret visit to Israel, the idea that the Saudis are busy trying to find a way to strengthen ties with Israel is not beyond the pale of reason.

The Saudi Royal Family is in the middle of a serious transition away from their terrorist backing past. Crown Prince Mohammad bin Salman is a far more worldly personality than his predecessors and sees his role as steering the Kingdom away from the wahhabism it has been associated with.

Despite his growing power there are many leaders within the Saudi Kingdom who are opposed to the many changes that the Crown Prince is trying to bring to the Kingdom.  Although the traditional leadership has allowed to back channel covert relations with Israel, these have been for the sole purpose of pushing back on Iran. The Crown Prince seems to be pushing for a far more open relationship.

Trump: Saudi Arabia has a “very positive” feeling toward Israel

President Donald Trump made history in his foreign trip to Saudi Arabia and Israel, by forcing the Saudis to allow Air Force 1 to fly directly from Riyadh to Israel. The meetings in Riyadh left the President with the impression that the Saudis are now willing to open to the point where he made the now famous line: “Saudi Arabia has a ‘very positive’ feeling toward Israel.”

So the question remains why is the Crown Prince so bullish (at least behind the scenes still) on forging a relationship that goes beyond defense with Israel?

The answer the lies in his realization that not only is Israel not going anyway, but it is the key for the Sunni Arab states to connect in a far more broad way to the wider world.  While the Sunni block has been busy fomenting jihadism and selling oil, Israel has been developed into a global leader in innovation that has growing connections to India, China, Africa, and other developing regions.  Not to mention its reputation as a leader in military technologies.

With jihadism becoming dangerous to its own masters and oil running out, the Crown Prince knows he must pivot and change in order to survive. While peace between Israel and the “Palestinians” remains elusive, peace between Saudi Arabia and Israel may very well reshape the Middle East in a way that can change the nature of Israel’s relationship to the Sunni world.