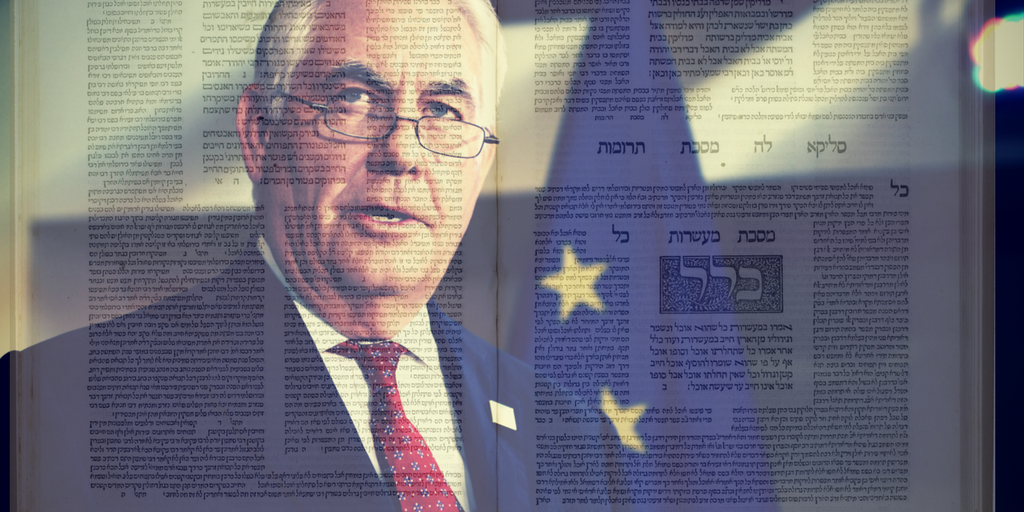 The decision to follow through with sending Iraqi Jewish archives back to Iraq is part of a disturbing pattern.

The law of Occam’s Razor, refined to common parlance, is that the simplest explanation is usually the correct one.

If we apply Occam’s Razor to recently reported positions of the US State Department, then we can conclude that the people making decisions at Foggy Bottom have “issues” with Jews and with Israel.

Last Friday, JTA reported that the State Department intends to abide by an agreement it reached in 2014 with the Iraqi government and return the Iraqi Jewish archives to Iraq next year.

The Iraqi Jewish archives were rescued in Baghdad by US forces in 2003 from a flooded basement of the Iraqi secret services headquarters. The tens of thousands of documents include everything from sacred texts from as early as the 16th century to Jewish school records.

The books and documents were looted from the Iraqi Jewish community by successive Iraqi regimes. They were restored by the National Archives in Washington, DC.

It began with the Babylonian exile following the destruction of the First Temple in Jerusalem 2,600 years ago. Until the early 20th century, it was one of the most accomplished Jewish communities in the world. Some of the most important yeshivas in Jewish history were in present-day Iraq. The Babylonian Talmud was written in Iraq. The Jewish community in Iraq predated the current people of Iraq by nearly a thousand years.

It was a huge community. In 1948, Jews were the largest minority in Baghdad.

Jews comprised a third of the population of Basra. The status of the community was imperiled during World War II, when the pro-Nazi junta of generals that seized control of the government in 1940 instigated the Farhud, a weeklong pogrom. 900 Jews were murdered.

Thousands of Jewish homes, schools and businesses were burned to the ground.

With Israel’s establishment, and later with the Baathist seizure of power in Iraq in the 1960s, the once great Jewish community was systematically destroyed.

Between 1948 and 1951, 130,000 Iraqi Jews, three quarters of the community, were forced to flee the country. Those who remained faced massive persecution, imprisonment, torture, execution and expulsion in the succeeding decades.

When US forces overthrew the Baathist regime of Saddam Hussein in 2003, only a dozen or so remained in the country.

Today, there are none left.

As for the current Iraqi government that the State Department wishes to support by implementing its 2014 agreement, it is an Iranian satrapy. Its leadership and military receive operational orders from Iran.

On the other hand, members of the former Jewish community and their descendants have an incontrovertible claim to them. And they have made this claim, repeatedly.

To no avail. As far as the State Department is concerned, they have no claim to sacred books and documents illegally seized from them.

When asked how the US could guarantee that the archive would be properly cared for in Iraq, all State Department spokesman Pablo Rodriguez said was, “When the IJA [Iraqi Jewish archive] is returned, the State Department will urge the Iraqi government to take the proper steps necessary to preserve the archive, and make it available to members of the public to enjoy.”

It is hard not to be taken aback by the callousness of Rodriguez’s statement.

Again, the “members of the public” who wish to “enjoy” the archive are not living in Iraq. They are not living in Iraq because they were forced to run for their lives – after surrendering their communal archives to their persecutors. And still today, as Jews, they will be unable to visit the archives in Iraq without risking their lives because today, at a minimum, the Iraqi regime kowtows to forces that openly seek the annihilation of the Jewish People.

And the State Department knows this.

Then there is the second story that came out this week, whose implications are no less dismal.

On the face of it, the demand is part of a turf war that the State Department has long fought with Congress regarding the scope of Congress’s power to engage in foreign policy. In the final year of the Obama administration, Obama forced Israel to agree not to accept supplementary appropriations in defense aid from Congress beyond what was agreed upon in the memorandum of understanding he concluded. Obama’s position was rightly viewed as a means to undermine Israel’s relations with members of Congress.

But it was equally a means to undermine Congress’s ability to assert its constitutional power to appropriate funding.

But in the empty hope of averting a last-minute move by the Obama administration to enable an anti-Israel resolution to pass at the UN Security Council, and concerned that a Hillary Clinton administration would offer Israel less assistance than Obama had offered, Netanyahu signed the deal.

Graham reacted to the MOU’s conclusion by stating that it is unconstitutional and therefore Congress would disregard it.

After Trump was elected, his advisers assured Israel that they would not enforce the MOU’s restrictions on supplementary funding. And yet, now, the State Department is seeking to do just that.

While in many ways this is an internal American fight, the unmistakable fact is that the State Department always seems to fight its turf war with Congress over issues relating to Israel. Moreover, the fight always involves bearing down on some of the dumbest aspects of traditional US Middle East policy.

Second, the State Department fought and won a Supreme Court battle to block implementation of the law requiring it to permit US citizens born in Jerusalem to have Israel listed as their country of birth on their passports.

In both cases, the State Department’s actions reflected a longstanding policy of mollycoddling antisemitic Arab regimes and terrorist groups at Israel’s expense. No US interest has been advanced by these efforts. To the contrary, as Senator Tom Cotton argues in relation to the State Department’s current efforts to force Israel to return the $75m. supplemental appropriation for missile defense projects, the US harms itself by undermining its key ally in fighting the enemies it shares with Israel.

Moreover, the $75m. supplemental assistance for development of missile defense technologies is not a gift to Israel. As the current standoff between the US and North Korea makes clear, the US itself is in dire need of just the sort of anti-missile technologies that Israel is developing. Indeed, the US stands to lose if Israel cuts back its missile defense programs due to lack of funding.

So again, we return to Occam’s Razor.

The State Department’s determination to return the purloined Iraqi Jewish archive to the Iraqi government, like its efforts to convince Trump to demand that Israel return the supplemental aid, doesn’t appear to be guided by any underlying concern for US interests.

Why would Egypt or Saudi Arabia object to Israel developing new means to intercept Hamas, Hezbollah or Iranian missiles? So like its fights against congressional efforts to recognize Israel’s capital city, and indeed like the State Department’s insistence that the US has no option other than recertifying Iranian compliance with Obama’s nuclear deal with the ayatollahs despite overwhelming evidence of Iranian noncompliance, there is an undercurrent of obsessive vindictiveness to the State Department’s current efforts.

In issue after issue, the same officials engage in behavior that appears to reflect a compulsive habit of always demanding that the US adopt positions that weaken US-Israel ties and undermine Jewish rights in Israel, and throughout the Middle East.

Perhaps there is another explanation for this consistent pattern of behavior.

But the simplest explanation is that the State Department suffers from an unhealthy obsession with regard to Jewish rights and the Jewish state.