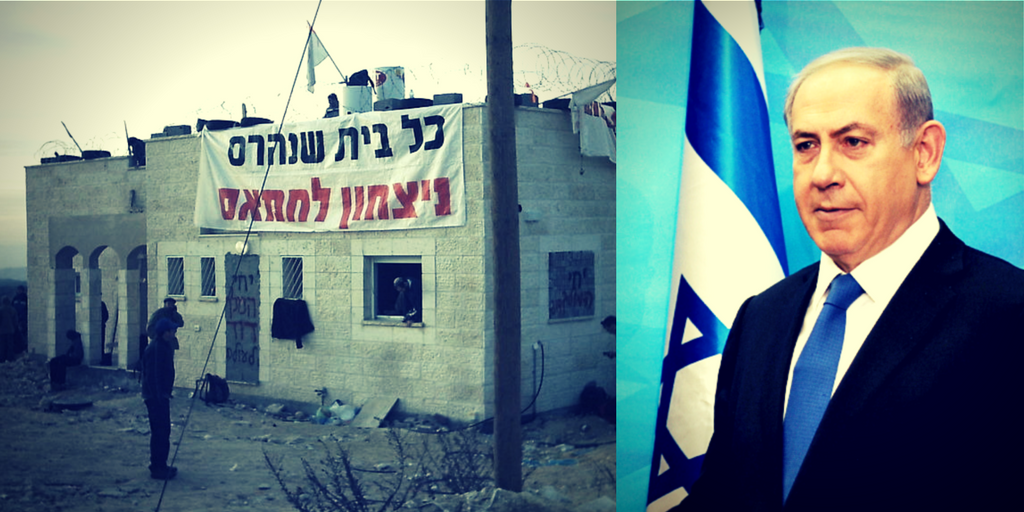 Amona is destroyed.  Its residents removed, houses bulldozed, and farmlands uprooted.  For 20 years these pioneers worked the land and settled the abandoned hill, making it flourish and come to life.  Multiple governments, from Sharon’s to Olmert’s to Netanyahu’s aided and encouraged the Jews who came to the strategic hill.  They were provided with electricity, water, and even mortgages.  Now that same government under overwhelming pressure from the Supreme Court has wiped an entire community off the map.  Why? Because a European funded left-wing organization  found a long lost Arab family member of the original land owners who had left and abandoned the property over 50 years ago.

In a normal civilized country this would be solved as a monetary settlement with the government paying the Arab more than the price of the property, yet in Israel Jews get their houses bulldozed. What makes Amona more frustrating is that a bill (now nearly passed) was introduced to prevent future occurrences of a similar type. Originally this bill was meant to retroactively include Amona and two other communities pending destruction, but the bill eventually dropped those three communities paving the way for today’s action.

The assumption that the Supreme Court is set to play ball now that they have been fed their quota of Judea and Samaria destruction is absurd.  We who live in Judea and Samaria must understand that the left who set up the internal organs of the state might not be in overt control, but they are embedded in the bureaucracy and judicial system to such a point that they will not simply fade away. Three generations ago they succeeded in becoming the founding members of the State of Israel.  They succeeded although Begin was far more popular with the Jewish street.  Those 29 years between 1948 and 1977 which marked the rise of Menachem Begin and the Likud gave the Left ample time to set the system up in a way that would allow them to continue to control the State of Israel without overt ruler-ship.

The Left will not go away.  Their control is too important for them.  The government dropped the ball on Amona, because they insisted on fighting the Left with kid gloves and as long as they are not willing to take the fight to the organs of power still controlled by the Left, then the government which is backed by a majority of Israelis will never be able to implement or enforce its will. If Bibi wants to be remembered as a great leader long after he is Prime Minister he must wake up and clean house entirely.  He must fight Israel’s internal enemies from a point of faith and clear direction towards a true Jewish State. The first focus must be the Judicial system. It is this tool the Left uses to rule over Israelis and it is this system that must be completely overhauled and rectified.  If the Prime Minister is not up for the task, it is time to find a leader that is.