When Donald Trump meets with Crown Prince Mohammed bin Salman, the de facto ruler of Saudi Arabia, the president should have three clear and forceful messages for his reform-oriented guest: Focus your undivided attention to adopting a soft power approach to the Iranian regime, end the war in Yemen and lift your blockade of American ally Qatar.

These three interconnected messages that President Trump should deliver to MBS (as he is known) stem from a geopolitical reality that has been in existence for over 39 years: The Iranian regime continues to be the most serious threat to regional security in the Middle East and the major state-sponsor of terrorism. Concomitantly, the Iranian people continue to be the most serious threat to the Islamic regime and the only real hope for a fundamental change in Iran.

Mr. Trump and his national security team should make it clear to the crown prince that Saudi Arabia’s efforts to confront the Iranian regime by war through proxy in Yemen has not deterred the IRGC. Sadly, the conflict in Yemen is draining Saudi Arabia’s precious financial resources. According to some estimates, the Saudi effort to confront the Iranian regime in Yemen is costing the Kingdom around $1 billion per month.

After spending billions of dollars, Saudi Arabia is not close to thwarting the designs of Ayatollah Khamenei to build a beachhead on the Arabian Peninsula by supporting his Houthi allies. Spending a small portion of this $1 billion on a robust soft power approach toward the thugs ruling Iran would be a better investment by MBS.

The president should also ask that the Saudi crown prince lift the blockade of his smaller neighbor Qatar because this move has split the GCC and diverted the Security Pact’s attention from adopting a unified approach to confronting the threat posed by the Iranian regime. Qatar is home to America’s largest prepositioning based in the world and ExxonMobil is the largest investor in that country’s energy sector.

The Saudi crown prince may point to Doha’s ties with Tehran as one reason for the blockade. But for Saudi Arabia to criticize Qatar for its relations with Iran is unfair because Qatar shares a major natural gas field with Iran. If Qatar takes a hostile approach toward Iran Tehran will react negatively and jeopardize the flow of natural gas to world markets.

Mr. Trump should applaud the young ruler of Saudi Arabia for his boldness in wanting to confront the Iranian regime but he should also point out that If Crown Prince Mohammed bin Salman adopts a robust, consistent and efficient soft power policy in his dealings with the Islamic regime, he will have the full support of the president and his entire national security team.

The United States government should make it loud and clear to MBS that by solving the “Iran Problem” through non-military means he will usher in a new geopolitical and economic dynamic within the broader Middle East.

While MBS and his father, King Salman, may be aware of the consequences a soft power approach toward the theocratic regime in Tehran, it may be worth Mr. Trump emphasizing to the crown prince the tectonic geopolitical ramifications of a new order in Iran:

No more funding for groups like Hamas (who are holding Palestinians hostage in the Gaza Strip) and Hezbollah (who are holding the people of Lebanon hostage to their dogma); an end to support for Houthi rebels in Yemen; liberating Bahrain (home to America’s Fifth Fleet) from the constant threat of IRGC adventurism; decoupling the butcher of Damascus (Bashar Assad) from his equally thuggish patrons; freeing Iraq of political intervention; demonstrating to the Muslim world the bankruptcy of Islamic ideology as a form of governance; and, removing an existential threat to Israel.

In addition to the aforementioned, Mr. Trump should strongly encourage MBS to adopt a soft power policy toward the regime in Tehran because a free and democratic Iran, at peace with itself and its neighbors will usher in a new economic renaissance for the entire region. The $2 trillion that are currently under the control of the region’s sovereign wealth funds can be invested inside Saudi Arabia, UAE, Bahrain, Qatar and Kuwait to boost human capital and create jobs.

Furthermore, these funds can also be put to productive use in rebuilding parts of Iraq, Yemen and Syria. And finally, Iran’s 80-plus million market can become a destination for investments by Saudi Arabia and its GCC allies.

Mr. Trump should encourage Mohammed bin Salman to adopt a course correction as it concerns Saudi Arabia’s policy toward the theocratic regime in Iran. The leader of the free world has a historic opportunity to point out to Mohammed bin Salman that by embracing a soft-power approach toward Iran he can go down in history as the leader who ushered in a renaissance for the people of his country and the region.

Originally Published in the Washington Times. 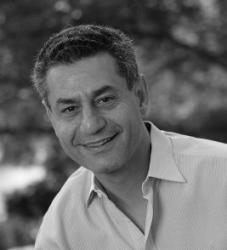 Sohrab Sobhani is an American author and lecturer on energy issues, U.S. immigration policies and U.S. policy toward the Middle East.

Sohrab Sobhani is an American author and lecturer on energy issues, U.S. immigration policies and U.S. policy toward the Middle East.