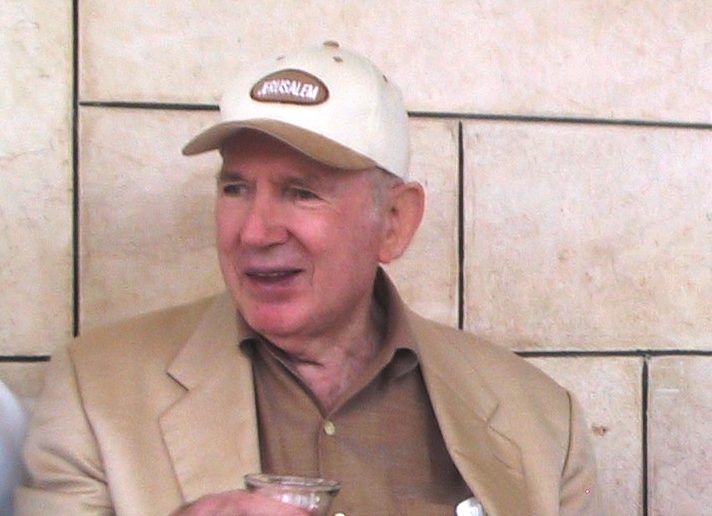 A crown has fallen from our heads….. these words were said when the great Chassidic leader Menachem Mendl from Vitebsk passed away in Tiveria in 1788. And i say these words today, with the passing to the next world, of Irving Moskowitz.

There are many Jews who know from where they came. They have history, heritage and roots, but they may not have a sense of the now – of the greatness of the hour for the Jewish People. Irving Moskowitz had both. He knew from where he came, and he knew where he was going.

His felt the energy of the returning and emerging Jewish People in her homeland and he felt as one with both the land, and her people.

Although referred to, by many as האיש של ירושלים – the man of Jerusalem, together with his loving and every so-caring wife Cherna, he was involved in Chevron, Beit El, Yesha in general, Gush Katif, Gush Etzion, educating politicians from the USA about Israel, and was even involved in ‘Operation Torah Shield’ at the outset of the Iraq war, bringing hundreds of students to Israel, to show the ultimate solidarity.

Wasn’t just a nice concept for Irving. It was real and part of his makeup.

chessed and huge generosity, made him stand alone on the highest Jewish pedestal in both  Israel and abroad.

He stood side by side, shoulder to shoulder, and heart to heart with  Am Yisrael at every step,

in this unfolding redemption process.

From the time Irving Moskowitz walked the alleyways of the Old City with Mati Dan, nearly 40 years ago, till recently – when his soul-neshama departed to the Heavens, Irving Moskowitz had a “beautiful and pure love affair” with Jerusalem. With Jerusalem flowing thru his veins, Irving was part of the woven fabric of Jerusalem, feeling the pulse of the city, even from afar in both California and Florida. His body may have been generally in the exile, but his essence, his heart and his soul were all in Jerusalem.

Libi BaMizrach (My Heart is in the East) wasn’t just a phrase for Irving. His yearnings and dreams of Jewish life returning to Jerusalem were realized and actualized, by his own drive, committment and finances.

Those homes and children were and are the families and students living in the heart of Jerusalem.

The hundreds of families of the Old City, the old Yemenite Village of Shiloach, Ir David, Maaleh HaZeitim, Shimon HaTzaddik, Kidmat Zion, Abu Tor, Beit Orot and the future families of Ganei Yitzchak, are all “his families and homes”.

Irving Moskowitz has redeemed and reclaimed Jerusalem for the Jewish People, and has thus ensured that a united Jerusalem stays in Jewish hands, for generations. He has been at the pioneering forefront of the unfolding realization of the redemption process and the Zionist dream in Jerusalem. A modest and humble man of peace, who believed that Jews had the natural, moral and historical right, to buy and live in any neighbourhood of Jerusalem, especially in an area, from where they were evicted. He also believed, that the only way to achieve basic peace and coexistance, with our Arab neighbours, was for Jews and Arabs to live together, under Jewish and Israeli sovereignty.

He felt the pain of the Holocaust with members of his own greater family perishing in Nazi Europe, and he knew first-hand, the concept of Judenrein. (Free of Jews). Irving Moskowitz was not going to allow that to happen in Jerusalem – where Jews should be barred or forbidden to buy and live in peace anywhere in Jerusalem. ‘Judenrein’ would not apply in united Jerusalem for Irving and Cherna Moskowitz.

So, he purchased and purchased more, he built Jewish neighbourhoods, he added Jewish life to the Holy Basin and thus easily stepped into the enormous shoes of Rothschild and Montefiore.

From his first “cheque” helping to purchase or redeem Yeshivat Chayei Olam (Today Yeshivat Bratslav Shuvu Banim), till the unfolding building project of the Shefer Hotel (Ganei Yitzchak) near Mt Scopus and the Shimon HaTzaddik neighbourhood, Irving z”l and Cherna have been involved in nearly every significant building project in the eastern sectors of Jerusalem. The Moskowitz name is associated with nearly everything, from buildings like Beit Wittenberg, Beit Volero-Dolgin and Beit Knesset Ohel Yitzchak in the Old City…..Yeshivot – Ateret Yerushalayim, Shuvu Banim, Beit Orot and the Mechina in Beit Zion…neighbourhoods like Kidmat Zion and the old Yemenite Village of Shiloach and the “jewel in the crown” neighbourhood of Maaleh HaZeitim.

The world would say no to Maaleh HaZeitim. The Arab League, UN, EU and even pressure from both US and Israeli authorities, would all try to stop Moskowitz. (Stop Moskowitz Now was their official call).

BUT Hashem had His own road map, and Moskowitz together with Ateret Cohanim –  was Hashem’s partner. Maaleh HaZeitim was built and today, over 100 Jewish families live on the slopes of the Mount of Olives.

On a very personal level, it is a tragic and sad day primarily for Cherna, their eight children, many grandchildren and the wider Moskowitz family. But also on a national level, it is day of mixed emotions.On one hand, we mourn and are greatly saddened by Irving’s passing from this world. Ateret Cohanim has lost a true friend, and a unique partner. Jerusalem has lost its pillar and builder. Am Yisrael has lost a unique idealistic individual who is referred to as Boneh Yerushalayim.

But on the other hand, one can only be inspired, stand in pride and salute a giant, who has changed the face of Jerusalem and whose achievements for the Holy City, are second to none.

We also know, that Cherna (May she live to 120yrs) and the Moskowitz family, who have totally supported Irving for all these years, will continue to walk proudly in Irvings footsteps.

Yes – today, i mourn and cry for the “loss” of Irving, but i also wryly smile to the Heavens, for i’m in awe and admiration, of what Irving z”l achieved for Jerusalem, in his lifetime of 88 years, and i truly believe that G-d, is now welcoming “His Builder of United Jerusalem” with open arms, to help with the building “Jerusalem of the Heavens”. (Yerushalayim Shel Maalah)

In conclusion – it will be said to the mourningMoskowitz  family – throughout the Shiva “המקום ינחם אתכם בתוך שאר אבלי ציון וירושלים” May you be comforted by HaMakom along with the other mourners of Zion and Yerushalayim. The standard understanding is that HaMakom – G-d, whi is in every place, will give you comfort. Or, as was told to me when my father z”l sadly passed away last year – the knowledge of his soul-neshama going to Gan Eden-HaMakom, that will give comfort.

I think that in Irving’s case – we all have a third meaning of this comfort. HaMakom- as referred to in the Torah – is also Jerusalem. And so – when we look around anywhere in Jerusalem, we will see Irving Moskowitz. The knowledge and sight of Irvings contributions and achievements in Jerusalem. His redeeming and building the eternal united city – that too will give all of us, and hopefully the Moskowitz Family a lot of comfort.