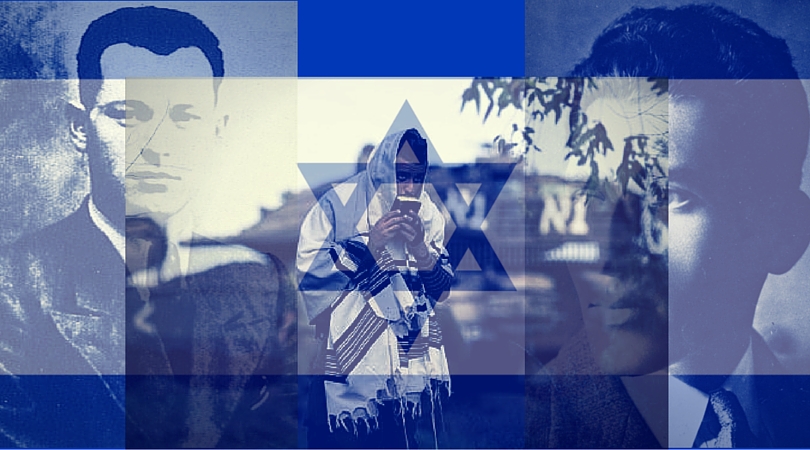 The twenty-third of Iyar marks the day David Raziel fell in battle during World War Two. Raziel is best known for being the commander of the Etzel (Irgun Zvai Leumi) during the late 1930s and as a model for what the modern Hebrew soldier was meant to be.

Less commonly known about Raziel was his connection to Palestine’s Chief Rabbi Avraham Yitzḥak HaKohen Kook and the yeshiva where national-religious ideology developed. He studied at Mercaz HaRav for years and was even a regular study partner of Rav Zvi Yehuda HaKohen Kook, son and ideological successor to the chief rabbi. Together the two learned the elder Rav Kook’s writings, specifically as those writings apply to Israel’s national rebirth as a means to usher in a better world for humankind.

The young men growing up in these communities are more often than not filled with a selfless dedication to this vision that generally finds expression through exceptional military service.

More than being the model for the modern Hebrew warrior, Raziel can more specifically be viewed as the prototype for Israel’s national-religious community, especially those inhabiting the mountainous Samaria and Judea regions. Many of the more ideological Jewish towns and villages throughout the West Bank have bred a culture of dedication to Rav Kook’s vision for Israel and the world and – like Raziel – the young men growing up in these communities are more often than not filled with a selfless dedication to this vision that generally finds expression through exceptional military service.

It was at Jerusalem’s Hebrew University that Raziel befriended Avraham Stern and introduced him to the Torah and traditions of Israel. Stern had come from a revolutionary socialist background, growing up in the All Union Leninist Pioneer Organization (youth faction of the Russian Communist Party) at the time of the Russian Revolution and first entering the Jewish community through the socialist Hashomer Hatzair. Stern had been unimpressed with both the Zionist right and left but was immediately inspired by Rav Kook’s messianic philosophy and – in addition to gradually taking on Jewish ritual practices – accepted upon himself the task of reviving the Israelite Kingdom.

Stern understood the Jews to constitute a people and not a mere culture or religion as most Marxists at the time claimed. He recognized Israel’s indigeneity to Palestine and identified British colonialism as the greatest obstacle to Jewish liberation. He joined Raziel in the Etzel command and the two worked together in building the nucleus of a Jewish fighting force that initially focused on defending Palestine’s Jewish community from the country’s increasingly hostile Arab population. At a time when the Haganah – the semi-legal Jewish militia under the command of Labor Zionists – practiced a policy of restraint in the face of attacks, Raziel led the Etzel in reprisals that demonstrated terror to be a sword capable of cutting both ways.

Although committed to the same ultimate vision, Raziel and Stern began to part ways in 1939. Raziel the soldier sought to turn the Etzel into a formidable army. But Stern the revolutionary saw more value in a clandestine underground. His Marxist background enabled him to analyze the factors standing in the way of Israel’s freedom. He identified Britain’s material interests in the Middle East, concluded that these interests demanded permanent control of Palestine and decided on the necessity of an anti-colonial struggle to free the country. In fact, by applying Marx’s method of analysis to the Jewish people as an indigenous people victimized by British imperialism, Stern came to deeply identify with the anti-Roman rebels of the Second Temple era – even taking for himself the penname “Yair” in honor of Masada’s Sicarii commander Elazar Ben-Yair (according to Professor Joseph Klausner, an influential teacher of Stern’s, the Sicarii were proto-communist Jewish nationalist guerrillas).

Raziel had the long-term vision for Malkhut Yisrael as a “light unto nations” but his short-term political vision was too narrow and myopic to reach Stern’s conclusions. When World War Two erupted, Stern distinguished between the German tzorer (persecutor) and British oyev (enemy), arguing that while the Germans hated and sought to harm the Jews, the British were the true enemy for standing in the way of the Jewish mission (by occupying our homeland and preventing Jews from returning home). These conclusions were reached prior to the Wannsee Conference at a time when German policy was merely to deport Europe’s Jews to whatever far-off country would take them. Adept at finding common ground with anti-Semitic Polish officials, Stern suggested a diplomatic agreement with Germany that would send the persecuted Jews to Palestine in exchange for the Etzel’s cooperation against England. But with or without such an agreement, Stern concluded that all efforts should focus on fighting British rule, for the sake of both freeing the homeland and rescuing Europe’s Jews.

Lacking the analytical tools to even recognize the inherent conflict between Jewish and British interests, Raziel accepted upon himself the political authority of Z’ev Jabotinsky and placed the Etzel at the disposal of the British war effort. Rejecting Jabotinsky’s leadership, Stern demanded a Jewish war aim in exchange for helping the British. He felt that without a commitment from London to either open Palestine’s gates to Jewish refugees or commit to a Hebrew state following the war, fighting for the British was betraying the Jewish cause. From Raziel’s perspective, the Germans – who most fiercely hated and were attempting to harm Jews – were the primary foe. But because Stern and his followers viewed the Jewish people not as an object with a problem (anti-Semitism, persecution, etc.) but rather as a subject with desires (independence in Jerusalem), they were able to recognize the necessity of an immediate anti-British struggle. They broke away from the Etzel and created a revolutionary underground dedicated to freeing Palestine from foreign rule. Although his knowledge of Torah was clearly deeper and broader than Stern’s, Raziel lacked the political sophistication to recognize the moves that would bring their people closer to the ultimate goal both men shared.

Hunted by the regime and driven by the symbolism and meaning of their leader’s demise, Stern’s small band of followers – the Fighters for the Freedom of Israel – possessed the strategic understanding to make each move count.

Raziel fell in battle wearing a British uniform on foreign soil. And the Etzel suffered from paralysis until 1944. Stern, by contrast, was shot dead while handcuffed by British detectives in Tel Aviv. Hunted by the regime and driven by the symbolism and meaning of their leader’s demise, Stern’s small band of followers – the Fighters for the Freedom of Israel – possessed the strategic understanding to make each move count. Every single explosion, shot fired and word of propaganda pasted to the walls of urban centers was geared towards very specific short- and long-term goals – forcing the British into a policy of collective punishment to maintain security, fostering general hostility towards the empire among the populace, dragging the Etzel (and even briefly the Haganah) behind them in their anti-colonial struggle, finding points of common cause with progressive forces in the Arab world, generating global sympathy – especially on the left – for their cause and making the price of ruling Palestine more expensive for the British than the benefits of exploitation. Applying the same Marxist analysis as their martyred leader, the Sternists identified the empire’s material interests in the region and attacked those interests until retreat became England’s best strategic option. And official British documents attest to the fact that it was “Jewish terrorism” that forced their withdrawal from Palestine.

Israel’s contemporary national-religious sector, of which I am apart, shares much in common with David Raziel – faith, long-term vision and a readiness to sacrifice. Our boys serve with distinction in Israel’s most elite units and we’ve successfully made a two-state solution impractical through our efforts to populate Samaria and Judea with Jews. But like Raziel, most of us sadly lack the political sophistication to recognize the material factors driving efforts to divide the country or to formulate effective strategies to advance Israel closer to our vision. The failure to save Gush Katif in 2005 is perhaps the clearest example of this flaw. Despite the many arguments focused on whether or not to actively resist, no one presented a sound strategy for HOW to effectively stop the disengagement plan. No one properly identified the material conditions and pressures driving Ariel Sharon to act as he did and no one suggested a comprehensive strategy to prevent the expulsion from being carried out.

There are questions the national-religious sector desperately needs to ask.

How do Israeli political leaders benefit from promoting a two-state solution?

How is such a policy in the regional interests of the United States and why does Washington push so aggressively for it?

How have the Israeli and Palestinian ruling classes benefited from the Oslo process?

In what way does accepting American aid make our leaders subordinate to Washington and vulnerable to pressure to surrender our heartland?

Is it possible to increase our Knesset representation without diluting ideology?

What is the best way to win over the Israeli masses to our vision?

Can the struggles for Eretz Yisrael and Jewish identity be communicated to the world in a language that would at the very least generate broad-based critical support?

With whom should political alliances be sought?

Is a relationship with Evangelicals desirable or dangerous?

Is reality truly as simple as “those giving us money are our friends and those trying to harm us our enemies” or should we carefully discern our own national interests, identify who might have common interests and then create the proper conditions to enable an alliance?

What material factors are driving Jews and Palestinians into conflict?

Must Palestinian grievances be rejected out of hand or could they somehow become part of advancing Jewish liberation?

If the forces of westernization within Israeli society have used the Palestinian cause to advance their agenda for decades, couldn’t those loyal to Eretz Yisrael and Jewish identity potentially do the same (especially now that partitioning the land has become practically impossible)?

We need to analyze the real obstacles standing in the way of Israel’s destiny and formulate the most effective means of overcoming those challenges.

In addition to raising another generation of dedicated soldiers, the national-religious sector must develop sophisticated political leadership. Rather than follow the modern-day Jabotinskys into a fantasy of Israel as an outpost of Western civilization, we need to analyze the real obstacles standing in the way of Israel’s destiny and formulate the most effective means of overcoming those challenges.

David Raziel, the prototype for our most courageous and dedicated young men, teaches us a valuable and tragic lesson. If we don’t learn to think outside the box and start questioning the very assumptions behind most of our political ideas, we can easily lose our way and unwittingly betray the struggle we’ve committed our lives to. Dedication to a higher purpose and the willingness to sacrifice for a greater vision might make us a powerful force in Israeli society. But a scientific analysis of our situation and the ability to formulate effective political strategies are crucial to actually thwarting the plans of those seeking to divide our land and advancing to the next stage of our people’s liberation.