When people hear of Uman Rosh HaShana many different things comes to ones mind such as ״woah why do people leave Israel and go to Uman?” Or “dude Uman is awesome it’s like a Jewish rave.” It’s shocking that I actually went to Uman after hearing all the negative gossip from the various peanut galleries but there is an aspect of Uman that is not televised on the news and written in articles. First of all traveling to Uman for Rosh HaShanah is not an easy journey, it’s a spiritual experience that challenges your emuna (faith) and your gratitude. Besides leaving the comfort of your home and family to travel to celebrate Rosh HaShanah in Uman doesn’t make any sense(if you don’t know why your going) but for a Torah observant Jew that has a strong connection to the teachings of Rebbe Nachman it makes a lot of sense. Anyways the moment you step outside your house with your suitcase ready or in my case a giant camping backpack the obstacles start to begin….. Now I can write down each and every thing that happened to me on my spiritual journey in UMAN during Rosh HaShanah but instead I’m going to share with you one powerful story that has forever changed the way I think.

This story that I am about to share with you is a true story and just happened this past Monday morning when I was at the Kiev airport traveling back to Israel. First of all I almost missed my shuttle to the airport from UMAN because I didn’t hear my alarm and I think I only got like an 1hr30mins worth of sleep that night. Ok but I made it on a later shuttle with my big backpack and a plastic carrying on bag which had my Tefilin and 5 of my Sefarim and my Rabbis book as well, so 6 books total (and all of them are very important, especially my Tefilin.) You might be asking yourself ” well if it was so important why didn’t he put it his big back pack?” Well when I flew to Kiev they made me check my bag and I thought they would make me do it again which they did. Anyways back to the story….. So we we make it to the Kiev international airport where no employee speaks english fluently. We soon found out we were at the wrong terminal and our flight was taking off in about an 2hrs, so we were all over the place trying to figure out how to get to this other terminal.

After a 20min walk in the cold damp land of Ukraine we made it to Terminal B. While we were going through security I realized I didn’t have my plastic carrying on bag which had my Tefilin and books. Once we got through security and passport control I received a text message in Hebrew that someone found my stuff and I was so relieved, but the flight was going to be taking off in about an 1hr and now I had to go back to the other terminal where I just came from. So I went back to the other terminal and it wasn’t there. I checked everywhere. I called the guy who texted me that he found it and he told me that security wouldn’t let him take it through. I think he was trying to bring it to Israel for me. Well anyways it didn’t work and no one had any clue where it was.

Since I was tight on time because I had a flight to catch and was in the wrong terminal I made my way back to my terminal and to my gate to start boarding. The entire flight back to Israel I spoke to G-D. I remember telling him “I know everything happens for a reason and even though I don’t know why this had to happen to me I know everything is going to be okay.”

I was bummed out but I was trying remain positive….. Well yesterday I was trying to figure out how I’m going to afford a new pair of Tefilin because they are not cheap and my Rabbi was telling me try not to worry about it right now, I think he also told me that because for the past 4 days I’ve been under the weather and it’s not so smart to make decisions when you are not feeling good.

Well anyways yesterday I pushed myself to go to work, and while I was at work I received a phone call from an unknown number. I picked up the phone and the man only spoke Hebrew, but I was able to understand what he was saying. Do you know what he told me???? “יש לי תפילין וספרים ” (i have your tefilin and books)…. I was blown away.

This man must of found my stuff in Kiev and brought it back with him to Israel. He lives in a city that’s about 2hrs away from me.

This is what UMAN is about. It’s about hardships, and happiness, faith and gratitude at the exact same time. When hardships happen in our life how are we going to deal with it? When amazing things happen to us will we be grateful? On the surface UMAN looks like a party but it’s actually a doctors appointment for the soul, and everyone need to get a check up once a year.

Next Post Oslo at twenty-four - Failing the “crystal ball” test 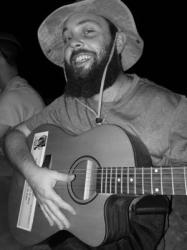 Ari is the host of Parsha Time.

Ari is the host of Parsha Time.