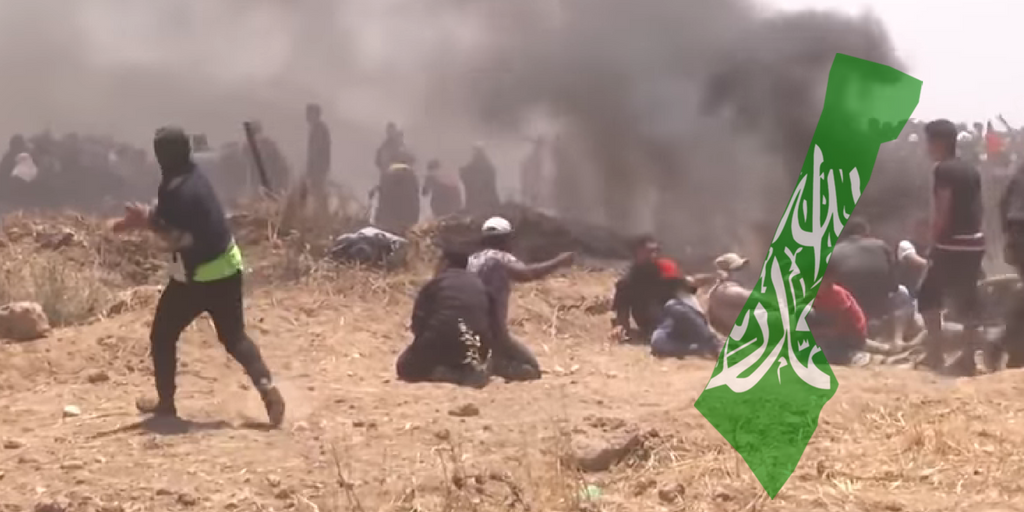 Hamas supporters in Gaza held the world’s first peaceful protest with hand grenades, pipe bombs, cleavers and guns. Ten explosive devices were peacefully detonated. There were outbursts of peaceful gunfire and over a dozen kites carrying firebombs were sent into Israel where they started 23 peaceful fires. And Israeli soldiers peacefully defended their country leaving multiple Hamas attackers at peace.

“We will tear down the border,” Hamas Prime Minister Yahya Sinwar had peacefully vowed. “And we will tear out their hearts from their bodies.”

But the only hearts his terror thugs tore out were already bleeding with sympathy for Islamic terrorists.

The Hamas mob chanted, “Allahu Akbar” and the genocidal racist threat of, “Khaybar Khaybar, ya yahud,” a reference to the primal Islamic massacre of the Jews. While IDF soldiers held back the invaders, the jets of the IAF targeted the snake’s head striking Hamas compounds and outposts. By 5.30 PM, the Hamas organizers changed course and began urging the thugs away from further fence attacks.

Hamas had offered $100 to every rioter. During previous violent assaults back in April, the Muslim Brotherhood terrorist group had been offering $200 to anyone shot by Israelis, $500 for severe injuries and $3,000 to the dead.

The Hamas supporting thugs are depicted as helpless, starving victims who can barely lift the firebombs they’re throwing at Israelis, but they make ten times as much as the Israeli soldiers they are there to kill.

Hamas can write all those checks to its aspiring killers because the cash is coming from Iran.

Last year, Senwar, whom Israel had released in exchange for captured Israeli hostage Gilad Shalit, had boasted that Iran was once again “the largest backer financially and militarily”.

That comes out to an estimated $100 million a year.

With as many as 50,000 Hamas supporters in Gaza participating in the day’s attacks at $100 a head, over 1,000 allegedly injured at least $200 each, and another 52 allegedly killed at $3,000 each (there is no reason to treat Hamas casualty figures coming out of Gaza as anything other than propaganda), the whole thing cost Hamas and Iran $5.3 million. The unmarked cargo plane filled with foreign currency that Obama dispatched to Iran carried $400 million. That was part of a known $1.7 billion cash payment.

But the total Obama terror payments to Tehran may go as high as $33.6 billion.

Despite media misreporting, the Hamas mass fence attacks began back on March 30 and even though their Great March of Return was supposed to end in mid-May, the show proved to be unexpectedly popular in Tehran, Brussels and Berkeley, and the attacks will continue through at least June.

Even a single one of Obama’s cash smuggling runs to Iran is enough to fund attacks just like these for two and a half months. And the $100,000 that an Iranian group offered to anyone who blows up the embassy? That illegal cash run can pay for bounties on every American diplomatic facility in the world.

Lefties bemoaning Israel’s moral authority can look up and follow the money trail from Iran’s IRGC (the terror mothership whom Obama resisted sanctioning), to the unmarked cargo planes from Obama, and to their own greasy little fingers that pushed the button or marked the ballot for him. The Israeli teens in IDF khaki with rules of engagement for using force longer than some graduate thesis papers are dealing with a problem from hell created by Democrat voters who wanted to feel inspired by Obama.

The cost of that inspiration today ran to dozens dead. If the Israeli teens shooting in self-defense lack moral authority, where is the moral authority of the Obama voters whose votes financed the attack?

Those Israeli teens in green earn $408 a month if they’re in a combat unit. Before a raise a few years ago, they weren’t even earning $300. Support units earn $327 and rear units $225. Not only is that far lower than the average civilian salary, but if often hardly covers living expenses. Dodging the draft isn’t hard these days. The average red-shirted hipster does it easily, putting in a few years at a fake startup before heading to Berlin to protest Zionism. And those who serve know if that they make a single mistake, if they shoot an attacker who turns out not to be armed, Israeli leftists will see them jailed.

Hamas supporters charge at them for $100 a day. And IDF soldiers hold the line for $400 a month.

So why for $400 a month, do Israeli soldiers face down mobs of tens of thousands of Hamas supporters baying for their blood? The average IDF soldier who reports for duty comes from one of the Judean communities (slurred as settlements) under attack by Hamas or from development towns in the north under attack by Hezbollah. He is often a religious settler who sees the hand of G-d in the high hills or a descendant of Mizrahi immigrants whose recent ancestors were oppressed under Muslim rule.

When your family lives under fire, holding the line on the Hamas mob isn’t an abstract idea of duty.

That’s why Hamas has to pay its rioting thugs ten times as much as Israeli soldiers earn to attack them.

While the $100 a day thugs threw rocks and firebombs, the professional terrorists hung back waiting for a breach in the fence. Some were caught planting bombs. And killed. They are among the 10 known Hamas terrorists killed in the Gaza fighting and bemoaned by the media as victims of a Jewish massacre.

The $400 a month Israeli teenager with a rifle is there as the front line in case the fence is breached. Hamas wants to take more hostages to free more terrorists. If it can’t do that, it will kill them. And if the attackers make it past the soldiers, they will hit Israeli towns and villages hoping to kill anyone they find.

While the fence holds up, the Hamas terrorists and their supporters sent flaming kites in the hopes of setting Israeli farms and fields on fire. One such attack had already destroyed 400 acres of wheat.

A sympathetic New York Times piece from last week described the “flaming-kite squadrons” prepping hundreds of fire kites, but unfortunately, “The wind was blowing the other way.”

“The wind is still against us,” Ismail al-Qrinawi whined.  “We are waiting for it to pick up so we can fly tens of kites and burn their crops.” Instead, “the direction of the wind not only thwarted the kites, but also blew copious amounts of Israeli tear gas toward the protesters.”

Pharaoh and his legions had the same bad experience with the wind. G-d must be an Islamophobe.

Hamas organized the invasion. It urged its human shields to head to the fence telling them that the Israelis had run away. That was the same way Egypt’s Nasser had tricked Jordan’s King Hussein during the Six Day War. Instead of defeating the Israelis and salvaging Gaza, Nasser’s scheme led to the liberation of Jerusalem, along with Judea and Samaria by the indigenous Jewish people. And it also had disastrous consequences for this latest attempted invasion by Egyptian-Jordanian settlers into Israel.

While the Hamas supporters were destroying their own crossing point infrastructure, as they had previously trashed their own gas lines, the United States was inaugurating the opening of an embassy in Jerusalem. Despite media misinformation, the riots predated the embassy and will postdate it.

The media used contrasting photos of the embassy opening and the Pallywood fake photos of protesters crying for the cameras and pretending to limp on crutches to smear Israel and America. And as usual they missed the real story. While Israelis and Americans were building something, Muslim terrorists were destroying everything they could get their hands on. While Rabbis and Pastors blessed, Imams cursed.

Hamas Sheikh Iyad Abu Funun had sworn on the Koran that, “We will not leave a single Jew on our Islamic land.” It did not matter, “whether left-Wing, right-wing, secular, religious, or extremist.”

That is what this is about.

The dedication of the embassy is a leap of faith. Faith in building rather than destruction. Faith in life instead of death. Faith in the G-d who watches over Jerusalem, not the Allah for whom Gaza burns.