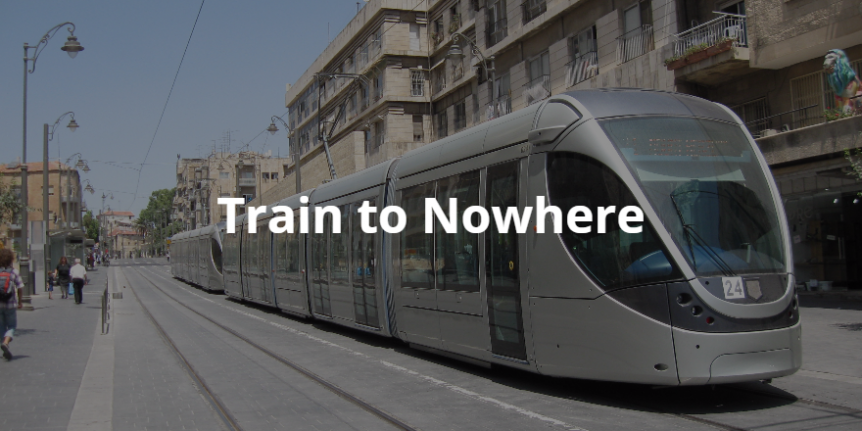 When the light rail was completed in Jerusalem, it was hailed as a new future for the city.  The theory led to policy, and the policy created a dogma to go along with it. The train represents, for the Jerusalem city government and really the Israeli government, an untested mantra that is fueled by hope.  The hope is rooted in economics.”If we just make the Arabs’ standard of living better, they will learn to like us. Who would ever risk their jobs?” That was the theory and the Jerusalem light rail exemplified it.

The problem with policy built on theory is that theory never truly represents the world we live in. The Arabs in Jerusalem have never had more access to jobs, commerce, and Western culture and yet their anger has grown. The “knife intifada” has completely flown in the face of the logic of the light rail theory.

Instead of changing course and admitting that the Arab street in Jerusalem and the rest of the country is not interested in financial security and Western culture, Israel for the most part ignored the anger simmering over the last year and now is paying the price.

The mayor of Jerusalem has staked his success on creating a feeling of a unified city for both Jews and Arabs. But what happens if one side doesn’t care for unity? What happens if they just don’t buy into Western culture or a better standard of living?

The answer is what we have now.  Neglected neighborhoods, violent education, and a fearful populace. What is our consolation prize? All we have is a light rail that acts as a showcase to what could be, but nothing more. Now instead of a train moving towards coexistence, it is a train to nowhere.

Despite the challenges the city and country face, they can be met and overcome. The most important thing is to recognize that coexistence can only work if all sides are interested.  This is not the case and the outgrowth of that realization should be a severing of the benefits that the Arab sector has been receiving.

The second action should be a complete return of property confiscated by Arab rioting in the 1920’s and 1930’s to the original Jewish owners or communal boards now representing them. This goes for the Old City as well as areas throughout the Holy Basin.

Lastly, new building projects should be instituted immediately, such as E-1 that will work to connect the suburb of Maale Adumim to the capital.

These three actions will show the Arabs in Jerusalem and throughout the Middle East that we are not going anywhere and they should act accordingly.