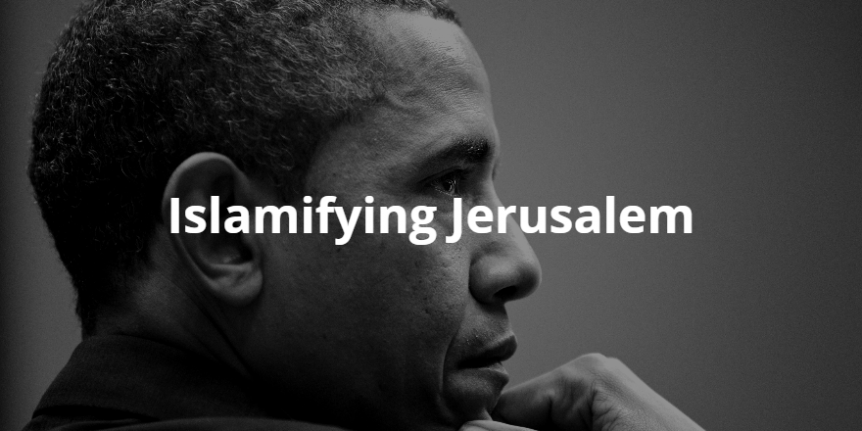 There is nothing more central as a focal point to Jews and Christians than the Temple Mount.  It is the place where Jews pray towards three times a day.  The Temple Mount is the site where the first and second Holy Temples once stood, and the third is to be rebuilt in the future, ushering in peace throughout the world. For Christians the Temple is a central part of the story of Jesus and serves as hope in the future of a more perfect era.

One would assume that as President of the United States, Obama would urge a policy for his administration that supported freedom of worship at a site that is Holy to three religions.  The fact that this is not the case is even more bizarre since the backbone of American culture is freedom of religion. Obama and his administration could have urged the Jordanian Waqf to change its attitude to Jewish and Christian prayer on the Temple Mount, but instead they supported the current trend of Islamification of the Holy City.

Early on in its involvement with the latest round of violence, State Department spokesperson Admiral John Kirby said the following: “Well, certainly, the status quo has not been observed, which has led to a lot of the violence.”

After a lot of condemnation, Kirby retracted.

Despite the retraction, the focus has remained on Jerusalem’s need to keep what can only be described as a self imposed apartheid on non-Muslim prayer at its holiest site as a prerequisite to calming tensions. This point has become more than just clever policy for Obama.  It is in fact bordering on obsession.

By reminding the players over and over again of the administration’s support for the Status Quo, it enables Muslims to continue rewriting history and teaching their followers that they must die for Al Aqsa. Of course now the Arab street believes that the entire Temple Mount is considered a Mosque and furthermore they believe the Kotel Plaza is as well as evidenced in their failed attempt to get UNESCO to rename the Kotel Plaza to Buraq’s Plaza.

The Temple Mount is really one part of the administration’s plan to enable the Muslim world to continue to change history. Part of the goal of the Obama administration is to force Israel to relinquish large areas of Jerusalem in order to give hope that a Palestinian State will have access to the Old City in some future agreement.  Yet a deeper more obvious reason exists. Obama, ever since his rise to the Presidency, has sought to reframe the American outlook on Islam.  From his famous Cairo speech to recent statements that Islam is part of the American story, to suggesting that the USA is no longer a Christian country, Obama has been determined to cut America from its roots. The attack on any sort of Jewish occupancy in formerly historic Jewish neighborhoods is far less connected to a future Palestinian State and is rather an attempt to deny a Jewish connection to its capital and by extension disconnecting Judeo-Christian culture from its source.

The areas known to Jews as Ir David (City of David), Shiloach, and Kfar Temani (Yemenite Village), are called by a later Arab name Silwan.  The world has pretty much adopted the Arab narrative that these areas are a centuries old village known by that name. With recent private purchases in these areas by Jews to reclaim stolen property, the administration goes out of its way to claim these are settlements and of course illegal.

Yet history says otherwise.  These neighborhoods were thriving areas of Jewish life up until the Arab riots of 1929 and 1936. In fact the neighborhood of Shiloach was home to a community of Jews from Yemen that boasted 5 synagogues and thriving commerce. After 1936 all was destroyed.

By opposing the reclamation of this property unlawfully stolen from Jews by followers of Obama’s “religion of peace”, the administration is actively supporting the Islamic Apartheid policies we see so much across the Arab and larger Muslim world.

The idea that an American administration would be opposed to a reclamation of an old Yemenite Synagogue that was stolen and populated by squatters is at the least absurd and more accurately described as immoral.

The administration’s policy can only be described as supersessionist in regards to Islam being the dominant kin of Judaism.  Yet, this is part and parcel of an administration that has sought to “right the wrongs” of American history through outreach to the Muslim world.

The dangers of erasing and the rewriting of history cannot be overstated, however the most dangerous aspect of all is the reconfiguring of America’s connection to the Judeo-Christian principles that have made it so great.