Rav Eliezer Schick, ZTL, shares some of Rebbe Nachman’s ‘Hidden Scroll’ which explains what will happen before Moshiach comes

For around 200 years’, the Megillat Setorim, or hidden scroll, written by Rebbe Nachman has been one of the best-kept secrets of Breslev chassidut. Until recently, very few people had even heard of it, and even fewer had access to its secrets.

The scroll was written in code by Rebbe Nachman before his death in 1810, and it contains secrets pertaining to what will happen in the world before Moshiach comes, that only one in a generation is initiated into.

Rav Shick revealed that there would be a terrible ‘war’ prosecuted against the nation’s leading Tzaddikim, as part of the preparations for Geula. He wrote (my translation):

“There are the wars of Gog and Magog, which will include all the machloket (disagreements) and the accusations that will be made against the true Tzaddikim, those who uncover the true will of Hashem Yitborach.

“Because there are those who want to eat them alive [these Tzaddikim], God should have mercy, and who say every forbidden thing against them, and mock them a lot. And by doing this, they greatly distance Jewish souls from coming near to them, and also lengthen the duration of our bitter exile, God forbid.

“And because they do this, woe to them! Woe to the souls of these people, who have a share in the machloketand disagreements involving the true Tzaddikim, and who reveal Hashem’s true will in the world.

“It’s written in the Midrash (BeMidbar Rabba, יח:י): ‘He who is brazen-faced, and who is not ashamed in front of those who are bigger than him, and he who is a baal machloket (troublemaker), you’ll see that he is the wickedest of the wicked.”

“And if I would have known, my dear brother, what was written in the Megillat Setorim regarding these soldiers of Gog and Magog, and the people who cover over the truth, you would fall on your face from fear and dismay, about how this bitter exile would be lengthened by them.

“And it was already written in the Yerushalmi, (2a) that ‘the insolent one will win-out over the kosher one’, in order to maintain free will and spiritual tests.

“As we can see, my beloved brother, you must flee from all machloket and from all disagreements, and not get drawn into fights and arguments. And in particular, be very careful that you should have no part whatsoever in any mockery, disagreements or criticism of the true Tzaddikim, because you don’t know what the next day will bring. And you don’t know against who and against what you may be opposing or mocking.

“And even though they may want to try to destroy you [with their words], because for them it’s a ‘mitzvah’ to persecute kosher people, SAVE YOUR SOUL, my beloved brother, and run away from doing ‘mitzvahs’ like these, because otherwise ‘bitter will be you end’.

“And the opposite is also true: If you help the true Tzaddikim, then you will bring the geula closer, and you will merit to have all the good that has been set aside for the soldiers of the House of David. [Referring to Moshiach].” 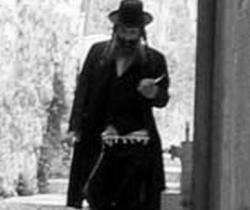 Yissachar Dov Berg is a resident of Jerusalem and a Breslover Hassid who writes avidly on the redemption.

Yissachar Dov Berg is a resident of Jerusalem and a Breslover Hassid who writes avidly on the redemption.