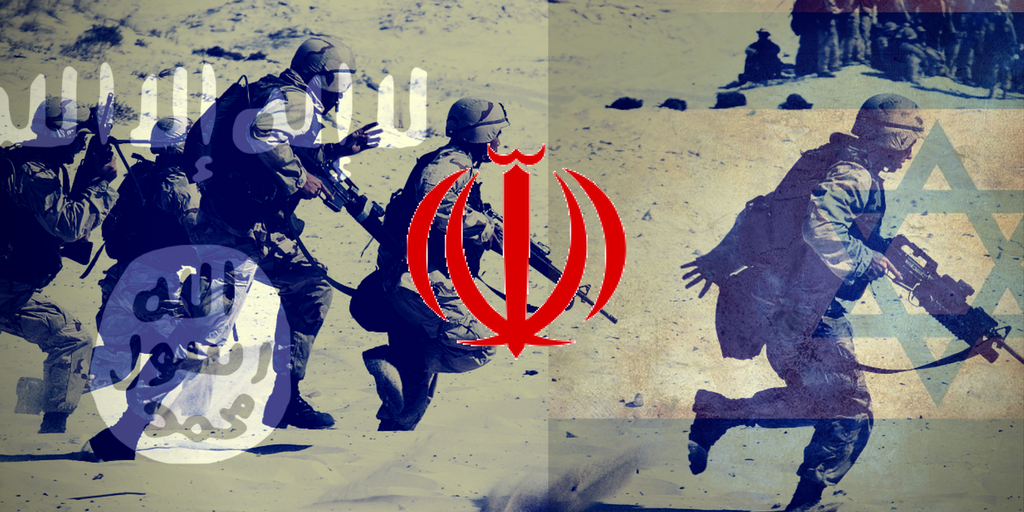 With the Mid-East on the cusp of melt-down, imagine what Isaiah (5:20) would say of proponents of ‘regional integration’: “Woe unto them that call evil good, and good evil; that put darkness for light, and light for darkness…”

These four recent headlines, spanning barely a week, bear chilling testimony to the grim and grisly realities of the Arab world.

After all, had the several score killed in the April 4th chemical attack in Northern Syria been beheaded, or lynched, or burnt alive or slaughtered by any one of the other gruesome methods by which hundreds of thousands of civilians have lost their lives in the Syrian Civil War over the last five years, it is more than likely that their deaths would have gone largely unnoticed and unreported.

Indeed, it would have been nothing more than brutal, barbaric business as usual for the region.

Across virtually the entire Arab world , from the Atlantic Ocean in the West to the Persian Gulf in the East; from the Sahara desert in the South to the upper reaches  of the Euphrates in the North, naked violence engulfs entire countries – Syria, Iraq, Yemen, Libya.  Others – like Lebanon and Egypt—are perennially on the cusp of its eruption; and in others (like Bahrain and Saudi Arabia), it lurks, simmering just below the surface, constrained only by the iron grip of police-state tyranny.

With painfully few—and dubious—exceptions (such as Iraq, teetering on the brink of failed state status and Tunisia, once the poster-child of the “Arab Spring”, now   increasingly threatened by Jihadi Salafi insurgents—see here and here), the Arab regimes are a noxious brew of theocratic tyrannies, military dictatorships and/or nepotistic monarchies. The violent exchanges that rage throughout the region occur between a wide range of protagonists and across a myriad of schisms: Sunni vs Shia, radicals vs. monarchs, rebel insurgents vs incumbent rulers, Islamist extremists vs traditional regimes.

It is against this doleful and daunting backdrop that the fatal follies of the past and of the emerging prescriptions for the future course of what has been perversely dubbed “the peace process”, must be assessed.

For as growing numbers of erstwhile advocates of the two-state paradigm are becoming increasingly skeptical—indeed, even despairing—of its viability within any foreseeable future, rather than admit the enormity of their error, they are now turning to a new false deity, no less preposterous  or perilous than the tarnished chimera of two-statism.

This is the new cult of “regionalism”, which attempts to invert the twisted logic of two- statism—but leaves it just as twisted.

At the core, regionalism is the idea that, rather than strive for an agreement with the Palestinians as a necessary precursor to its acceptance by the states of the region, Israel can, and should, establish a pan-regional alliance with allegedly “moderate” states, driven by a recognition of common threats (the menace of Jihadi cohorts and the specter of nuclear Iran)—thereby paving its way to a resolution of the Palestinian issue.

Central to this new cult is the bizarre belief that Israel’s “integration” into region—which, as we have seen, is little more than a cesspool of death, depravity and despotism –is a goal both necessary and worthy—and one that the nation ought to strive to achieve.

Thus, for instance in an article, Regional integration only way for Israel to achieve security, Atlantic Council senior fellow H.A. Hellyer writes: “…the only realistic way for Israelis to thrive in the long term is for them to be integrated into the wider region, beginning with a comprehensive and just peace settlement…”

This statement is not only of dubious veracity—since Israel seems to be thriving rather well for almost two decades without (thankfully) being “integrated into the wider region—but seems to collide with a later contention by Hellyer, who writes elsewhere: “A sustainable peace for Israelis is predicated on their eventual integration into the wider region.”

But perhaps one of the most puzzling and perturbing endorsements of the regional-integration paradigm came in a speech delivered by Tamir Pardo the former Head of Israel’s Secret Intelligence Service, Mossad.

In it, Pardo identified the emergence of “a rare confluence of interests between Israel and the moderate Arab states.”

Pointing to the drawbacks of relations that are entirely covert, he remarked: “Secret relations that take place “under the radar” are by their nature transitory.” Accordingly, he advocated Israel’s overt integration into the region: “The key to regional integration is to build economic and social bridges between countries, facilitating trade and tourism…. The deeper, the more open and above board relations are, the better suited they will be to survive the inevitable shocks and disruptions that take place from time to time…. Israel’s regional integration is a key to its very survival.”

But he warned “None of this will happen without a resolution of the Palestinian problem.”

There are several disturbing defects—both conceptual and empirical–in this portrayal by Pardo, which seem to indicate that his undoubted ability in covert operations is not matched by a commensurate acumen for political analysis.

So, while Pardo may well be correct in his doubts as to the durability of secret relations, his faith in more overt one seems wildly at odds with Israel’s experience in past decades, causing one to puzzle over what could possibly be the basis  for his unfounded contention, and his reasons for making it.

Indeed, the examples of Iran and Turkey clearly indicate that robust overt “economic and social bridges” as well as “trade and tourism” are of little value if the regime should change. After all, the relations with pre-revolutionary Iran and pre-Islamist Turkey could hardly have been closer or more cordial.

Yet, with the ascent to power of Khomeini in Iran and Erdogan in Turkey these ties proved, indeed, “transitory”.  Of course, the metamorphosis was particularly dramatic and rapid in Iran, where Israel was transformed from being a trusted ally to a hated enemy almost immediately. In Turkey, the process was more gradual and less drastic, but there can be little comparison between the tight strategic ties of yesteryear and the hostile attitude that prevails today.

This volatility in relations between nations is one of the most profound flaws in the regional-integration proposal—especially when it is predicated on a resolution of the Palestinian issue. For while it is true that countries like Jordan, under the Hashemite dynasty,  Egypt under Sisi, and the incumbent regimes in the Gulf may face common threats, it would be more than a stretch to characterize this as sharing long-term mutual interests with Israel.

Indeed, a yawning gulf separates between the seminal values that define the differing societies – with regard to individual liberties, gender equality, social diversity, religious pluralism—which clearly portends ample room for renewed adversarial relations once the common threat has been eliminated.

Israel would do well to heed the words of British Prime Minister, Lord Palmerston (1784-1865) on the fickleness of nations and their international ties “We have no eternal allies, and we have no perpetual enemies. Our interests are eternal and perpetual, and those interests it is our duty to follow”.

This caveat is particularly pertinent in the case of the regional-integration paradigm. For in essence the deal to be struck is as follows: Israel is called upon to make perilous permanent concessions (to resolve the Palestinian issue) in exchange for a temporary alliance, based on the (ephemeral) word of rulers, who head not only some of the most decadent and despotic regimes on the planet, but also some of the most threatened.

Accordingly, there is little guarantee that the Arab entity that makes commitments toward Israel will be the entity called upon to honor them when need be. After all, what would be the value of any understanding on integration entered into in 2010 with say Syria, or Iraq or Libya…

Thus, given the fact that the concessions Israel is called upon to make to resolve the Palestinian issue, are largely irrevocable, while the pledges given it are largely retractable, any regime change in Cairo and even more so in Amman would have potentially disastrous ramifications.

With an Islamist state abutting the envisaged Palestinian state from the East, dispatching irredentist insurgents to destabilize any purportedly peaceable Palestinian regime in the territory evacuated by Israel; with a regime in Cairo no longer interested in, or capable of, countering the Jihadi warlords in Sinai, pressing against Israel’s 200 km frontier and the land route to Eilat, Israel is likely to rue any credence it placed in regional integration.

The most troubling of questions

But of course the most troubling of questions regarding the regional integration question is this: If the allegedly moderate regimes really desire Israel’s help in confronting formidable common threats (the menace of Jihadi cohorts and the specter of nuclear Iran), why would they predicate that help on precisely the same concessions from Israel that they demanded prior to those threats arising?  And were Israel to refuse those concessions would these “moderates” deny themselves the aid Israel could provide them—for the sake of the Palestinian-Arabs, for whom they have shown consistent disdain and contempt over decades?

Furthermore, if the “moderate” states see Israel’s strength as a determining factor in making it an attractive ally in combatting the common threat of radical Islamism, why would they insist on concessions that weaken it, and expose it to greater perils as a precondition to accepting its aid? Why would they press for concessions that are likely to fall—as they did in Gaza—to the very Jihadi elements that both they, and Israel, see as a common enemy?

Indeed one might ask: Why should Israel have to make any concessions so that the Arab states would deign to accept its aid in their battle against a grave common menace?

As Lewis Carroll’s Alice in Wonderland once sighed “It would be so nice if something made sense for a change.”   It sure would!

Regional integration: What Isaiah would say?

Of course one can only puzzle over what merit proponents of regional integration see in its implementation. Do they really want Israel to be absorbed into the morass of cruelty, corruption and cronyism that is the Middle East?  What values that pervade their Arab neighbors, would they urge it to adopt in order to “integrate”?

For were Israel to resist adopting these and other regional values, how on earth could it integrate into the region?

So, with the Mid-East on the cusp of melt-down, one can only imagine what Isaiah (5:20) would say of the proponents of regional integration:  Woe unto them that call evil good, and good evil; that put darkness for light, and light for darkness; that put bitter for sweet, and sweet for bitter.