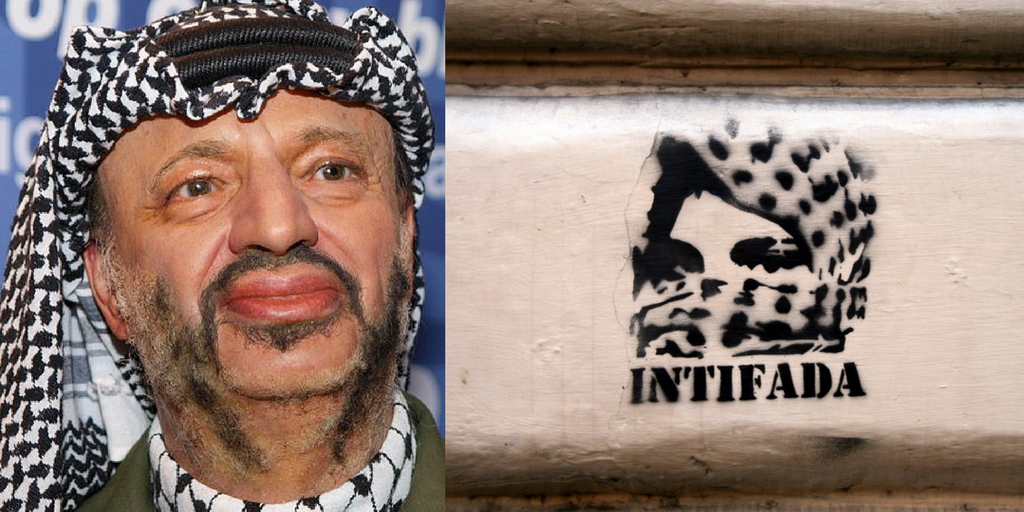 Palestinian leadership under Yasser Arafat received millions and millions of dollars every year from Western countries and the Muslim world. The Muslim world considered Arafat to be a hero of Jerusalem and even they considered him as a second Saladin who would finally liberate their land from the Jewish occupation.  The Muslim world knew very little or nothing about Yasser’s double faced status. Leaders like him have two faces, two languages, and two sets of promises. When they communicate with the international community, they use one set of languages and values, and make statements and commitments relating to a desire for peace and co-existence. When they turn their faces towards their own nations, they show a monstrous face. When they address their people, they never talk about peace, instead inciting their people towards terrorism. And they are even better at enriching themselves at the expense of the well-being of their people.

Yasser Arafat was one of the best of them. He always used his people to conduct terrorist activities and in return he and his organisation received billions of dollars from countries that included Qatar, Iran, Syria, Russia and other Arab countries

Yasser Arafat also never disclosed his actual wealth even to his party and family. He was one of the most greedy and cruel persons of in the short history of the Palestinians. A friend who worked with Israeli intelligence disclosed that Arafat died along with the knowledge regarding 75% of his secret foreign accounts and no one supposedly knows where they are and how to access them.  This is the wealth stolen from Palestinian aid received as donations to change Palestinian lives. The remaining 25% of Arafat’s personal accounts were openly transferred to his family. His wife and his daughter live in a most luxurious palace in the Parisian suburbs. Their wealthy life style can be compared to European royalty.  According to my Israeli friend, together the two of them spend approximately $50,000 daily maintaining this luxurious and fashionable life style. They even do not bother to live among their own people, people this father and husband supposedly fought a war for during much of his adult life. They care nothing about these people who live in intense poverty, they only concern is maintaining their life style.

In 2003, The International Monetary Fund (IMF) began to carry out an audit and found at least two billion dollars of Palestinian Authority Fund monies that were missing. It is now believed most probably that these funds were transferred to Arafat’s family in Paris. While Yasser Arafat was in a Paris hospital, his wife Soha Arafat agreed to disclose Arafat’s medical record on the condition of stopping the ongoing investigation into the missing funds. The PA was very frustrated not to be able to officially locate and recover the missing money which they were assured to have been transferred to Soha Arafat’s Swiss bank accounts. Finally, they agreed to pay her $2 million dollar a year for the rest of her life. Whether this means she secretly returned the money or not is speculation.

Israel’s Mossad not only believed but provided enough proofs to the government of Israel that Yasser Arafat controlled a personal financial portfolio estimated to be in the region of $6.5 billion.

The Arab media including the Syrian, Jordanian and Lebanese newspapers received a top-secret report regarding the financial status of the PLO, disclosing that for years the PLO had a deficit of over $95 million a month. The report became even more explosive in the Arab world when the IMF revealed that Arafat had diverted a billion dollars or more of PLO funds to his and his and Soha’s personal Swiss bank accounts from1995 to 2000. A Palestinian lawyer who has investigated PLO corruption said,

The deals frequently involved the cement and building industries of the Palestinian territories. The corruption ran into millions of dollars, which Arafat covered up in return for the profiteers giving him a portion. It was often said Arafat was the godfather of all the godfathers. The secret investments of Yasser Arafat were disclosed by an American financial investigation team and the report stated that Arafat invested his secret money after it was transferred from PLO funds to his personal Swiss account. Some of those investments included the Coca Cola bottling plant in Ramallah, a Tunisian cell phone company, and many venture capital funds in the US and the Cayman Islands. The money for a large part of his investments came from public funds like Palestinian taxes. Virtually none of it was used for the welfare of Palestinian people and it was fully controlled by Arafat and his family.  Arafat travelled almost all of the rich Western and Arab countries around the word and crying to everyone that, “We (Palestinians) are devastated and our economy is going to collapse and we cannot pay salaries to Palestinian employees and it is because of Israel’s occupation and blockade”. He convinced those countries and the IMF that the words of his mouth were true and if they were not going to fund PLO, the Palestinian economy would be damaged and would collapse completely. They did not yet suspect that Yasser Arafat was draining a huge amount of that money into his personal bank accounts and his people were really still being deprived through high unemployment and poor economy which those funds were supposed to be relieving.

Under the Oslo Accords signed in 1993 and 1995, it was agreed that Israel would collect sales tax on goods purchased by Palestinians living in Israel under Green Card status and transfer that money to Palestinian treasury but instead transferred immediately transferred it into his private accounts. From the outset of the Oslo Accords until 2000, Israel put the tax revenue into Arafat’s accounts at Bank Leumi in downtown Tel Aviv. Israel’s intent was that Arafat would use it to clean the area of terrorists and for the Palestinians’ welfare.

According to US officials,

But, again, this part of his portfolio was already known to the Intelligence departments and the Western financial powers. At that time nobody was aware of the absconded 75% of the monies, the part only he-and likely his wife and daughter- knew about.

According to an Israeli official, when Yasser Arafat was alive he paid $100,000 per month out of the Palestinian budget to his wife Soha who remained in Paris where she lived lavishly on this allowance. Arafat had an additional account in the Swiss bank for the PA but the code name of the account was one only he knew. There had to have been more than $300 million in his other Swiss account at Bank Lombard Odier, as this is where all the money was transferred to from the Israel’s Bank Leumi. As was noted earlier, Arafat’s secret Swiss accounts were closed around the time he died and no one will say where that money went.

No one even knows about how high the salary amount was that Arafat collected as a Chairman of PLO when he was in exile. Arafat received hundreds of millions of dollars from the KGB (the USSR’s intelligence agency) and the Saudis.

The now-deceased Saddam Hussein reportedly handed Arafat a $50,000,000 check for supporting him during the first Gulf war.

Where that money gone, I believe Soha Arafat knows. Further scandals where Arafat was directly involved in kickbacks, such as that of the Gas and Petrol’s pipeline in to Palestinian areas and Arafat’s investment in world’s stock markets will be addressed  in other article at some point.

Many Palestinian people had and have little money, adequately paying jobs, and own decent homes and businesses. The Arafats of the Palestinian people have all money to dispense and have everything to fulfill Palestinian dreams. If he could have used that money to push up the Palestinians’ economy instead of diverting this money to pay terrorists’ salaries, those whose only job is to commit terrorism against the state of Israel, think of what might exist today.  He could have built schools and universities that sent Palestinian youngsters, making them an educated people who design new technologies, create medicines, and make the whole world a better place. Instead he sent them in to the training centers in order to create terrorists. Palestinian children should be looking at long, health, prosperous lives in their own country instead of seeing their only purpose in life as being one to die young.

Yasser Arafat was not a hero of the Palestinians but a mafia lord in a corrupt network. He, his wife and daughter chose to be greedy money mongers who destroyed their people’s chance at a real nation and left a dark and hopeless future for the new generation of Palestinian people. Now, Gaza under Hamas and the PA under Mahmood Abbas continue running under Yasser Arafat’s steps to total corruption. In future articles I shall address their dirty politics of corruption and human rights abuses within the Muslim world.