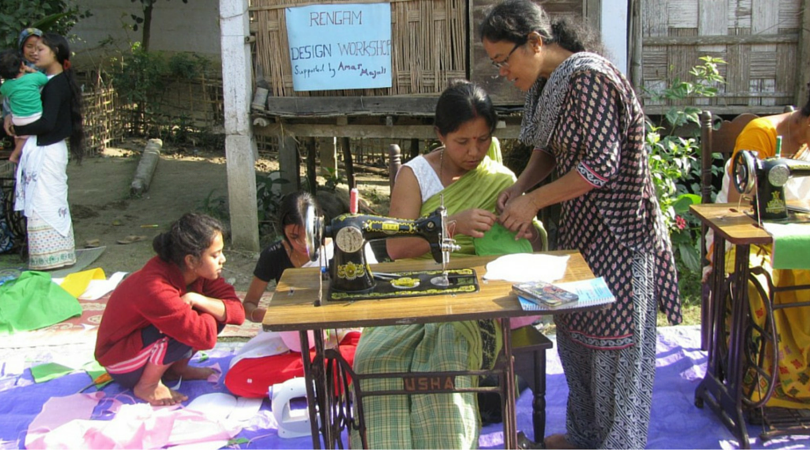 She didn’t speak their language, but that didn’t stop Gili Navon from befriending and assisting the women of a remote island tribe in northeast India.

Gili Navon didn’t intend to start a nonprofit organization when she traveled to Majuli, a remote island of about 200,000 in Assam, northeast India.

It was 2007, and she came with a photographer friend to explore arural culture she’d heard about from a yoga teacher during her yearlong backpacking trek through India after her army discharge in 2005.

Something about the place attracted her intensely. Though she did not speak Assamese or any local dialects, Navon bonded with the families – and particularly the women — of Majuli’s peaceful Mising tribe.

She accompanied them to the jungle to pick herbs and helped with household chores. She watched them spin raw silk and cotton into colorful garments. She saw the struggle for sustenance in this low-caste subsistence-farming society where tourists rarely venture and river erosion has caused mass relocation.

River erosion is a serious threat to the Mising tribe of Majuli. Photo by Mitu Khataniar

“We came to have a real relationship. Slowly I learned the language and visited many times. They knew I cared about them,” Navon tells ISRAEL21c.

That caring led her to do a four-month internship in Majuli during her studies at the Hebrew University of Jerusalem’s Glocal  (“global” and “local”) Community Development Studies master’s degree program.

“Coming in with an Israeli education, where you continually search for ways to improve and innovate, together with my love and appreciation of the local culture and way of life, I felt I have something to contribute.”

Navon organized 24 tribal women into a weaving cooperative in 2011 to help them turn their cultural tradition into a more viable source of income from marketable items such as table runners, scarves, wallets and yoga bags.

One project led to another, one trip to another. In 2013, Navon and fellow Glocal student Shaked Avizedek partnered with local youth and women to establish Amar Majuli (“Our Majuli”), a grassroots not-for-profit organization. In Israel, Amar Majuli now functions within Tevel b’Tzedek, a nonprofit that runs long-term volunteer projects to enhance the livelihood and wellbeing of communities in developing countries.

The heart of Amar Majuli’s community work is the Rengam (United) Women Weavers Cooperative, whose goal is to provide members and their families with independent sustainable livelihoods from handloom work and eco-tourism while gaining leadership skills.

The weaving cooperative today includes about 100 women, ages 18 to 60, from 20 villages. The project’s headquarters doubles as a meeting place for educational lectures on topics such as women’s health, and has also become an informal hostel for unmarried women who otherwise have no place in society.

To enhance the mobility and independence of the members, Amar Majuli established two bicycle banks. Navon explains that Majuli’s villages are far from infrastructure such as markets and hospitals, necessitating many hours of walking. Since Majuli is flat, cycling provides an easy solution. An innovative system allows each woman gradually to buy her own bike by paying pennies per use.

Mising women can get around more easily due to the Amar Majuli bike bank. Photo by Aviv Naveh

In addition, Amar Majuli runs a sustainable agriculture program in cooperation with the Farm2Food Foundation. The program provides practical tools for poor farmers of both genders, aiming to increase sustainable agro-economic productivity in an environmentally friendly manner.

“The main part of our work evolved around the establishment and operation of five demonstration plots equipped with drip-irrigation systems donated by Netafim,” Navon says.

During the monsoon season, the island suffers from floods and Amar Majuli shifts into relief mode, organizing medical clinics and giving out water filters. “This is a very hard period of the year. Roads are blocked, there are sanitary problems and shortages of drinking water, and many people get sick without access to medical treatment,” says Navon, 32.

Since its inception, the organization has worked alongside the local community without a formal budget or paid staff, developing solutions for social and economic problems. This year, Navon is curtailing her visits in a conscious effort to turn the leadership reins over to the local three staff members and eight board members.

A volunteer advisory board in Israel provides professional assistance in areas such as fundraising, branding and strategic planning. “We are in search of partners who want to support us and help us further reach out and ensure the sustainability of our community work in Majuli,” Navon says.

Gili Navon became close with the women in Majuli. Photo by Aviv Naveh

“People sometimes wonder what is the motive for someone to do something for a community outside her own,” says Navon, who lives with photographer Aviv Naveh in the Jerusalem suburb of Nataf.

“In Majuli I met a completely different way of life and a kind of poverty we don’t see here. I saw a need and an opportunity for development. The people have a complete lack of financial security, especially women. If someone gets sick and they already sold their cow, there is no way to save that person’s life. They lack the opportunity to break the cycle of poverty because of discrimination, social exclusion and lack of access.”

For Majuli, Navon adapted and modified the ABCD (Assets Based for Community Development) approach she learned in the Glocal master’s program. Rather than focusing on needs and problems, ABCD identifies and builds on the existing strengths and assets in a community. Navon writes and lectures on how ABCD can be adapted to various disadvantaged communities.

“Coming in with an Israeli education, where you continually search for ways to improve and innovate, together with my love and appreciation of the local culture and way of life, I felt I have something to contribute — and of course to learn, as well,”she says.

Navon was deeply influenced and inspired by the stories of her grandfather Moshe Nachshon (Lipson), who fought to bring Jewish refugees to Israel from Europe and was one of the founders of Flotilla Shayetet 13 navy seals unit.

“I grew up on those amazing, heroic stories, so finding a meaningful project was important to me,” she says. “I wanted to follow that example of dedicating myself to others.”