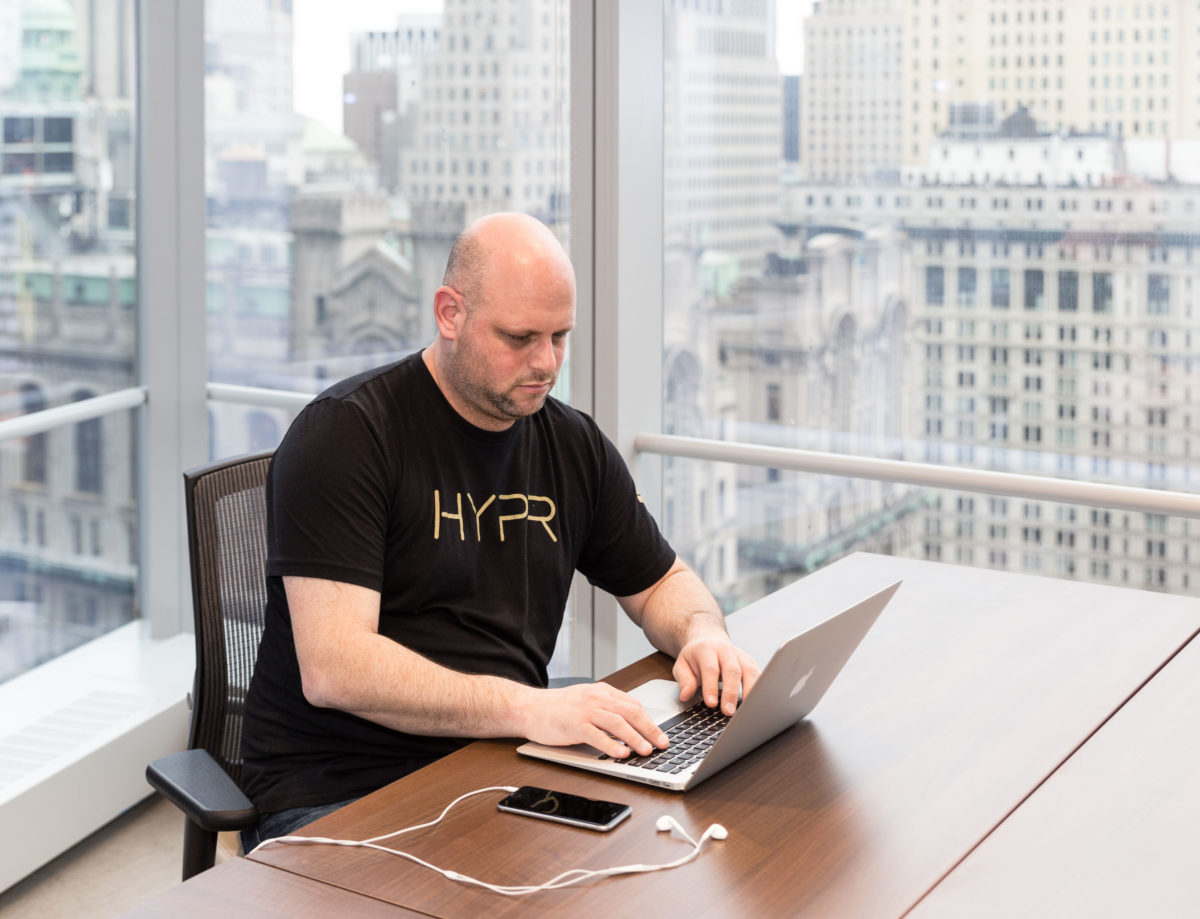 I had the opportunity to sit down with Gil Eyal, CEO and CoFounder of HYPRBrands.  Gil is a successful CEO of a fast growing startup located in New York.  As a CEO with roots in Israel, it was fascinating interview from both a technology angle as well as learning how Israeli can fare in the American startup scene..

Thanks Gil for speaking with us.

Can you  tell me how the road from early stage startup to a growth stage company been in the tech industry?

Very challenging, but the challenges have changed. If early on the main challenge was to convince people that the world I’m describing will exist, today it’s all about the numbers.

Our vision was always different than most of the industries. We believe in a world where there are millions of influential individuals that are easily approached by anyone with a brand or agenda and can be utilized to get messages across to interested individuals. We believe humans are wired this way – we surround ourselves with people we trust and consult in them before deciding where to eat, what to drive and how much to spend.

This new world requires a large amount of technology – discovery, evaluation, outreach, measurement – all of these become non-trivial when you shift from a world of 5,000 celebrities to ten million influencers.

Due to Israel’s reputation in the hi-tech scene, do you feel extra pressure to succeed?

I think being Israeli has been a strong net positive. The Israeli community is extremely helpful and you develop thicker skin after working in an Israel environment for years. The pressure to succeed has to be internal or you can’t make it as a founder. There are too many tough moments – too many ideas that pop in your head and for a second look like they might be better than the one you’re working on because you’re currently stuck in a dip.

I definitely feel a responsibility to represent Israel in a positive way – especially in areas where stereotypically Israeli founders are expected to struggle. We pride ourselves on the culture at HYPR and on our relationship with our investors and customers.

Can you tell us a bit about HYPR? How did the idea come to you?

As a marketer at heart, I’m a data fanatic. Over the years, I’ve gotten used to having access to more and more sophisticated audience demographic data and targeting solutions. Then I found myself in a talent buying role for a startup named Mobli, which was an early player in the photo and video sharing space in 2010.

I ended up doing deals with several hundred big name celebrities and social media stars. No one called them influencers back then, and there wasn’t much I could find about their audiences. I just knew they had a lot of followers and expected them to drive their fans to Mobli by using the product.

The truth is I should have known we would only have partial success because I knew nothing about the audience. I would never buy ad space in a magazine without knowing who reads it. Why would I be blinded by a vanity metric like the number of followers without knowing who they are, whether they’re active and whether they’d have any interest in my product?

I knew I wouldn’t be the only one with this problem. As influencer marketing was becoming mainstream I knew people would be looking for the same kind of data they see in other areas of marketing. The idea for HYPR came from wanting to apply traditional marketing fundamentals to an industry that had no data. HYPR’s audience demographic data is sourced through partnerships with some of the largest social networks in the World, coupled with groundbreaking technology that treats influencer profiles the same way Google treats websites. HYPR uses a combination of image recognition, voice transcription and natural language processing to combine with first party disclosed data from over four billion different accounts, to create the most accurate and timely analysis of the influencer world.

What’s is it like being an Israeli hi-tech leader outside of Israel?

As someone who grew up partially in the US and partially in Israel, I feel at home in both places. It has been amazing seeing how the New York tech scene has grown, and how Israeli startups have begun to make their mark, with more than 400 Israeli startups in NYC alone. I try to be accessible to young founders – especially ones that plan on moving to NYC, with advice and introductions.

People tend to lump things in groups. Everything I do reflects on Israel and on Israelis and that’s always something I’m aware of.

What has been the most challenging aspect of finding success in the hi-tech scene been?

For me it has definitely been the psychological aspect of running a company. It’s a very lonely role even if the people around you want to be supportive. Making decisions without all the information is a daily task and not for the faint of heart. The ups and downs of startup life were not meant for normal human consumption and it takes a long time to get used to them.

Thanks so much Gil and best of luck.