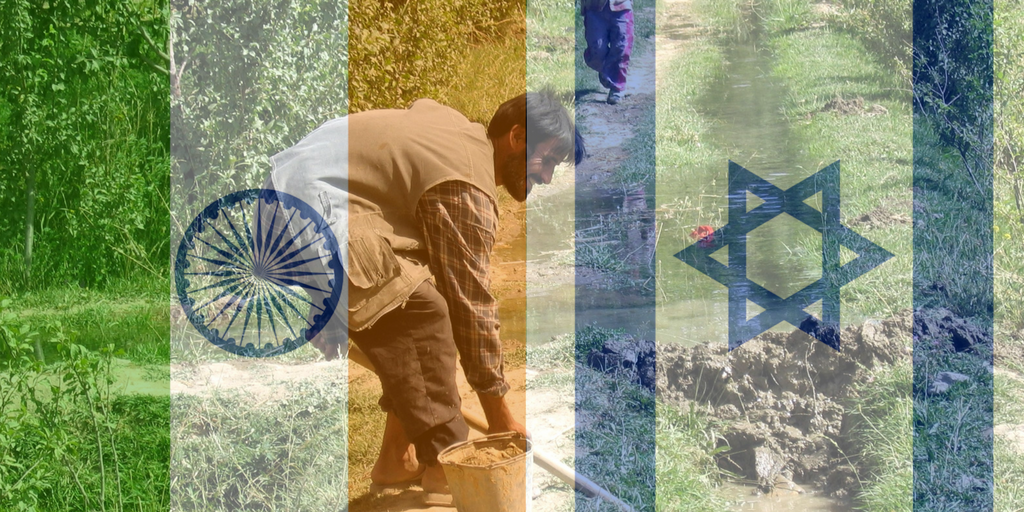 Originally Published in FirstPost in November.

Over the last 10 years, I have had the good fortune of meeting hundreds of small-scale farmers all over India. I came to appreciate their hard work, eagerness to progress, and the difficult physical and economic environment in which they work.

Farmers bitterly complain about these hardships, but they always light up when I mention that I am Israeli. Even in the remotest of villages, farmers are somehow well aware and appreciative of Israel’s agricultural achievements. Unfortunately, however, very few of those who adore Israel’s technologies also use them in their own farms. A tremendous potential therefore remains largely unfulfilled.

Israel’s experience and its technologies can help, so the growing agricultural cooperation between the two countries is heartening. Several Indian states have opened Centres of Excellence with the Israeli government. Cooperation in the private sector is also growing.

Last week, an Israeli business and academic delegation, led by President Reuven Rivlin, was hosted by President Pranab Mukherjeein Agro Tech 2016 in Chandigarh. President Rivlin declared that “when Israeli companies and Indian farmers meet, they can mage magic happen”. In a seminar organised by the Confederation of Indian Industry and Tel Aviv University, called ‘Digital Pathways in Indian Agriculture’, Israeli and Indian scientists and businessmen introduced exciting new technologies with the potential to transform the Indian agricultural landscape.

As exciting as technological innovations are, making them impactful will require a broadening of perspective. Agronomists and plant scientists have made incredible progress in understanding what crops need in order to flourish. Now, we need to develop a similar understanding of what farmers need in order to flourish. Without such an understanding, even the most revolutionary technologies will likely remain unused by the hundreds of millions of smallholders who grow India’s food.

Take drip irrigation, the most famous Israeli agricultural technology. Drip irrigation is proven to deliver the dual benefit of increased production and reduced water, fertilizer and herbicide requirements, exactly what so many Indian farmers need. Why then does the market for drip irrigation, while growing, still represent only a small fraction of Indian farmers?

The answers to this and related questions have to do more with economics than with agronomy, and more with farmers than with the crops they grow. The problem is that finding business models and government policies that can spread improved technologies sustainably has simply turned out to be as difficult a puzzle as developing these technologies in the first place.

It is therefore not for lack of effort or resources that a country that has mastered nuclear and satellite technology is still struggling to replace antiquated farming practices or lift its farmers out of poverty. The challenge is much more complicated than it may seem. And I don’t mean to suggest no programmes are successful. For example, in some states, like Gujarat, drip irrigation has been spreading rapidly in recent years, likely thanks to effective administration of the national drip subsidy programme. But we know too little about what works and what doesn’t and why and when.

We need to direct the same kind of energies that we put into the “crop” aspect of the challenge into the “human” aspect of the challenge. Frankly, it doesn’t help that the majority of India’s brightest and most ambitious young direct their brainpower to the fields of engineering, medicine and information and communication technology, while so few choose to take on the challenge of sustainable rural development (of course, there are wonderful exceptions, but they are too few).

India can surely succeed in transforming its agriculture, and we in Israel are eager to help. Let us begin by recognising the importance of not just the “technical element”, but also the “human element”. Let us build a bi-national, long-term and systematic programme that brings together academia, the public sector and the private sector; engineers, agronomists, plant scientists, social scientists, policy specialists and entrepreneurs. Let us harness the amazing brainpower, entrepreneurship and creativity of our two countries’ young generations, and get them involved. And most importantly, let us not shy away from leaving our offices and our labs and our experimental farms and stepping into farmers’ own fields.

Academia can have a powerful role to play. My own institution, Tel Aviv University, is leading the way by forging alliances with leading Indian universities and working with the Confederation of Indian Industry (CII) to carve new paths forward. We can use these collaborations to create a prestigious programme for outstanding, brilliant young Israelis and Indians to work together in small inter-disciplinary teams, and develop and test, in fields and villages across India, new approaches and models for adapting and disseminating relevant technologies to farmers. Governments can provide support and then scale up and implement those approaches that prove to be effective.

I believe a programme of this kind can radically change the perception of agriculture by young Indians from a thing of the past to a science of the future, and attract bright, dedicated and idealistic students from both India and Israel. These students will forge personal ties that will strengthen our relationship as countries, and achieve something that only they, if anyone, can do: help make Indian agriculture a model for the other emerging economies who are facing similar challenges.