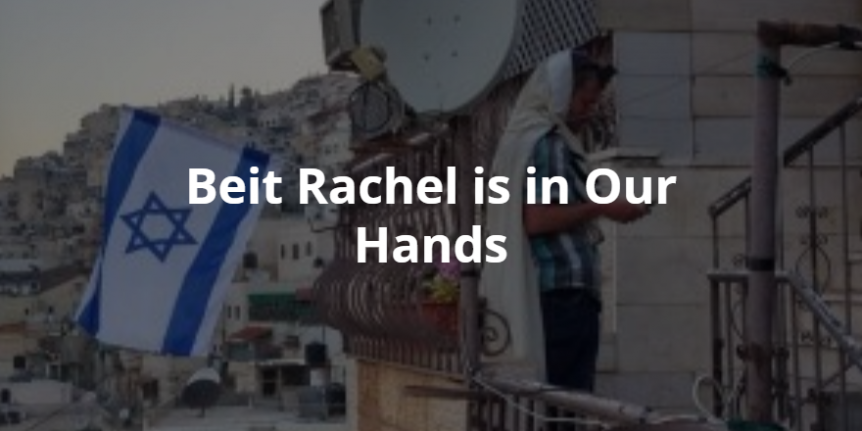 Very early Thursday morning…a few hours ago (TO AVOID UNNECESSARY FRICTION WITH SOME OF THE LOCAL ARABS DURING THE DAY) Jewish families and Yeshiva students entered a large premises, which is located in the old Yemenite Hekdesh in the Shiloach, on the slopes of Mt Olives overlooking the City of David and the Old City with Temple Mount.

The building is to be caled Beit Rachel.

The significant building complex is located in close proximity to all other Jewish buildings in the old Yemenite Village. (Beit HaDvash, Beit Yehonatan, Beit Frumkin and Beit Ovadia. It is also only a minutes walk from the recently redeemed sections of the original Yemenite Beit Knesset- Ohel Shlomo-Heichal Yonatan.(Named for Jonathan Pollard)

Some Basic History of the Area:
Yemenite Jews first arrived to Jerusalem in 1882. Kfar Hateimanim in the Shiloach was established. (BEFORE A SINGLE ARAB WAS LIVING IN THE AREA, which is today called Silwan by some people) At its peak 144-150 Yemenite Jewish families wereliving in the thriving and successful Yemenite Village on the slopes of Mt Zion overlooking the City of David, the Shiloach springs, the Temple Mount and the Old City.
1/ Attempt by extreme Arab elements including the Grand Mufti of Jerusalem Husseini to “ethnically cleanse” Jerusalem and Israel of Jews in the 1920’s and 1930’s. Pogroms and riots throughout Jerusalem was the result.
2/ British authorities who were not willing and incapabe to protect the Jews of Shiloach, evacuated the last remaining 35-40 Yemenite families in August 1938 (77 years ago), with a promise that the JEWISH REFUGEES could shortly return to their homes. British promise never kept.
3/ Arabs squatted in private Yemenite homes and squatted in Hekdesh properties.
4/ Arabs desecrated the Yemenite Synagogues and destroyed many of the buildings in the area. (even taking stones from buildings, roof tiles, floor tiles, taps, doors, wondow frames.
In 2004 the first Jewish families returned to the old Yemenite Village.
TODAY: After 77 years, Jews have returned home, including to properties owned legally (and ratified by all Israeli courts) by the Heldesh Benvinisti.
It is hoped that Jews and Arabs will be able to live side by side with each other in peace and coexistence, like can be seen when Arabs legally move into predominantly Jewish neighbourhoods like Pisgat Zeev, Ramat Eshkol, French Hill, Armon HaNetziv.