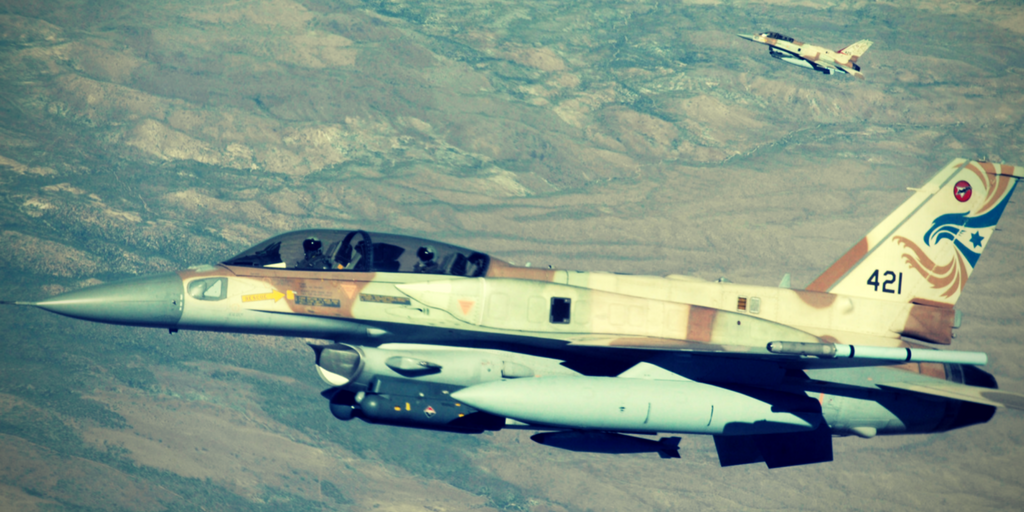 Hezbollah in Lebanon and Hamas in Gaza are giving out candies on the streets and dancing in joy. Why? For the first time since 1982, the IAF (Israeli Air Force) lost an aircraft in combat. An Israeli F16i “Soufa” (Storm) fighter jet was hit with shrapnel from an exploding SA-5 or SA-17 Russian anti-aircraft missiles launched at them from Syria. The plane was already back in Israeli airspace when it was hit. The pilot and navigator safely ejected and parachuted to safety, but the pilot was badly wounded and the navigator slightly wounded. Thanks to Hashem, the pilot is already out of life-danger and intensive care and the navigator has been released from the hospital.

An IAF post-mission probe determined that Syrian anti-aircraft missiles locked onto another of the eight planes carrying out the strike, but that plane was able to evade the missile. They surmise that had the downed pilot react differently, he too may have avoided being hit. We reject such hindsight, because the plot and the navigator reacted exactly as Hashem wanted them to react. Hashem wanted the plane to get hit, but in His mercy, the pilots’ lives were not only spared, but they landed safely inside Israel.

So here’s the emuna (simple and pure faith in the Creator/HaShem) debriefing: Hashem did tremendous miracles this past Shabbat. Let’s see a few of them:

Hashem, You are so great! Thank You for Your miracles – the ones we can see and the many ones we don’t see.

As of this writing, the situation on our northern borders is very volatile. Now is the time to strengthen emuna and to take on some – any – commitment in strengthening our relationship with Hashem. This is the message that Hashem wants to convey in our emuna debriefing. I’ll be the first to commit: with Hashem’s help, I want to be especially careful about saying “amen” every time I hear a blessing. This is something we all can do; it’s easy yet it’s tremendously cogent. Every “amen” has the power of knocking an Iranian, Syrian, Hezbollah or Hamas missile out of the sky. G-d willing, this coming Wednesday, I’ll give an entire lesson on “amen”. Meanwhile, may Hashem protect our country, our soldiers and our people, amen!