“Such is the way of creation: First comes darkness, then light.” – Talmud Shabbat 77b

Peeking in through the door and staring into the darkness came the familiar sound of a match striking. The light filling the room for an instance while dimming down slowly, I saw my grandmother with her head covered leaning down to light some candles. This act was not unusual. But when I saw that she drew in this Holy light while passionately devoting herself in Holy words to G-d, I knew I was witnessing something that would forever change the course of my life.

Each and every day and growing with great endurance, people are making their way back to Torah Judaism and the heritage of the Jewish people. Still widely unknown to most of Jewish communities, prophecy is being fulfilled on the world stage regarding this mostly forgotten group. Who are these people? They are known as the B’nei Anousim (Children of the Coerced), and many of their stories began like mine… a light in the darkness.

At a young age, my mother passed away. After my father remarried, I was raised in the Catholic church. Though I was too young to comprehend the implications of my feelings, my life felt like I was in exile. I was lost and disconnected from my Jewish identity. It wasn’t hidden from me by my parents, it was stolen from me long before I was born.

In my early 20’s I met and married my Beshert (soul mate). Both, of us had a deep longing to know G-d but had no idea how. So, what better place to start than inside to walls of the Catholic church…right? I quickly became excited about the idea of knowing G-d. We threw ourselves into the ministry of the the church. All seemed to be going well. That is, until the spring of 2007.

Always having this looming question in our hearts about the Jewish people, my wife and I decided to try a Passover seder. Sure, all of the children fell asleep as we struggled to read through the entire seder. Yes, the word ‘amature’ was being thoroughly revealed in the light of the full moon. And yet, something unknown was being unveiled to me that I already knew in my bones. This was a feeling I will never forget.

“If you are going to pursue this, it can not be done at THIS church”, our pastor told us after we shared with him this newfound excitement about Passover. Instead of being drawn in, we were being pushed away. We were at a crossroads. This was painful because we had many close friends connected with the church. However, this pain was necessary for use to begin our journey back to Judaism. The crossroads was now the road less traveled. And that road brought us to Denver, Colorado.

A horse of a different color is still a horse. A church of a different name is still a church. Things seemed to somewhat fit into the mold of Judaism as we found ourselves in walls of Messianic Judaism. Within these walls we learned a lot about Judaism. But, the more we learned about Judaism, the more we saw just how far outside of Judaism we were. Something was just not right. These walls felt as though they were closing in, keeping us inside for years before realizing just how much of a counterfeit we were partaking in.

Connection​ ​to​ ​the​ ​Sephardic​ ​Anousim

During the later part of 2009, my wife and I were invited to hear a guest speaker, Dr. Dell Sanchez. He had come to Denver to speak on the history of the Crypto Jews or the Bnei Anousim. I remember sitting in my seat following the lecture. Flipping through a book I just purchased, I stumbled upon a section listing Sephardic Jewish surnames. Among these names I saw “Ortega”, then “Herrera” (both from my grandfather), then “Navarro” ( my grandmother whom I mentioned earlier) Just then I remembered something that Dr. Sanchez had shared during the lecture about various hidden customs of the Anousim. He shared about separating meat from dairy, covering mirrors after the death of loved ones, salting meat, not eating pork, and women lighting candles on Friday night. I instantly remembered this from my grandmother.

Although, I only had this small memory of her, it was a spark that had remained with me. In the coming years I would research more about the Anousim and places in where they lived and traveled. I found many similarities between these findings and my research into my family. I even did a DNA test to find further evidence of my broken past. I discovered that my DNA matched many of the Sephardic Anousim as well as several DNA matches linking to the priestly tribe of Levi.

This was exciting! But, even with all this excitement, I still felt that I needed to make a much deeper connection to the Jewish people. DNA, surnames, and some possible family evidences would only (as Everette from “O, Brother Where Art Thou” stated) “Arouse my appetite without bedding it back down.” It was at this time that my family and I decided, if we really are possibly Jewish, we needed to embrace all that is Jewish and make our formal return. While we had already been studying for years, we knew that we needed the help of the Jewish community to
do things right. So, we left the Messianic church and went to the synagogue.

During this time, I got in contact with Yaffah Batya DaCosta, founder of Ezra L’Anousim (Helpers of the Anousim). I volunteered to help with several projects within the organization. My first project working with Ezra L’Anousim was to help with organizing and promoting the first of the Ezra L’Anousim pro Israel global rallies. Collaborating with a good friend of mine, we produced two short promotional videos called “We are Jews” and “Chazon Ovadiah” (Prophecy of Ovadiah) to help with bring awareness for the Bnei Anousim.Like Yaffah Batya DaCosta, I am a firm believer in activism for bringing Jews closer to Judaism, specifically the Bnei Anousim.

He used to say: It is not your responsibility to finish the work, but neither are you free to desist
from it- Pirkei avot 2:16

I also believe that the ones assisting Hashem in helping the Anousim will ultimately be other Anousim. This is not only because we share a very special connection, but we understand very well the darkness of our exile and all hope to see things change in a positive way. Not only for the Bnei Anousim, but for all of Klal Yisrael.

“There is no power in the world that can stand against us when we feel a part of our history, part of our people and part of this historic struggle.”- Natan Sharansky, Chairman of The Jewish Agency for Israel and former Prisoner of Zion

Our​ ​conversion​ ​and​ ​current​ ​activism

In the month of Elul 27 in the year 5777 (September 18, 2017) my family and I completed our conversion to Orthodox Judaism! Baruch Hashem it has been the connection that we have been longing for many years.

Recently, I was also appointed to the role of ‘Director of Media’ for Ezra L Anousim and so now both the passion and the vessel to help other Bnei Anousim has been united. Our first task is in launching the newly designed website for Ezra L’Anousim (www.bneianousim.org), we plan to release documentary about the emerging Bnei Anousim communities. Our media company, Kavod Media, is currently seeking collaboration with other film production agencies to reach this lofty goal as well as other future projects.

My life to this point has been a long and fulfilling journey. I have had many trials, victories, failures, peaks, and valleys, but I feel like this is just a beginning. I am still in exile. However, now, it is only physical. I pray that this exile will shortly come to an end and that this Passover we all together can say and truly mean, “Next year in Jerusalem”.

“It shall come to be on that day that the Lord will once again show His hand… And He will gather in the dispersed ones of Judah from the four corners of the earth.” – Isaiah 11:11-12

Previous Post Change in Jordan, Easy, Cheap and Good for Everyone

Next Post Does Saudi Shift to Russia Leave Israel Cornered? 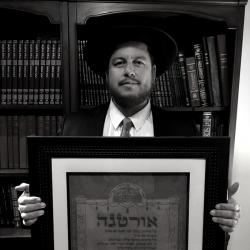 Yosef Ortega is a Pro Israel activist for the Bnei Anousim and the newly appointed Director of Media for Israeli non profit organization Ezra L’ Anousim. In addition to his work with Ezra L’Anousim, Yosef is also the Co-Founder and Director of Kavod Media, a digital media company in Denver Colorado that aims to help promote and develop outreach campaigns for Jewish non profit organizations. Yosef currently lives in Denver Colorado with his wife and children with hopes to move he and hiis family to Jerusalem, Israel in the coming years.

Yosef Ortega is a Pro Israel activist for the Bnei Anousim and the newly appointed Director of Media for Israeli non profit organization Ezra L’ Anousim.

In addition to his work with Ezra L’Anousim, Yosef is also the Co-Founder and Director of Kavod Media, a digital media company in Denver Colorado that aims to help promote and develop outreach campaigns for Jewish non profit organizations.

Yosef currently lives in Denver Colorado with his wife and children with hopes to move he and hiis family to Jerusalem, Israel in the coming years.