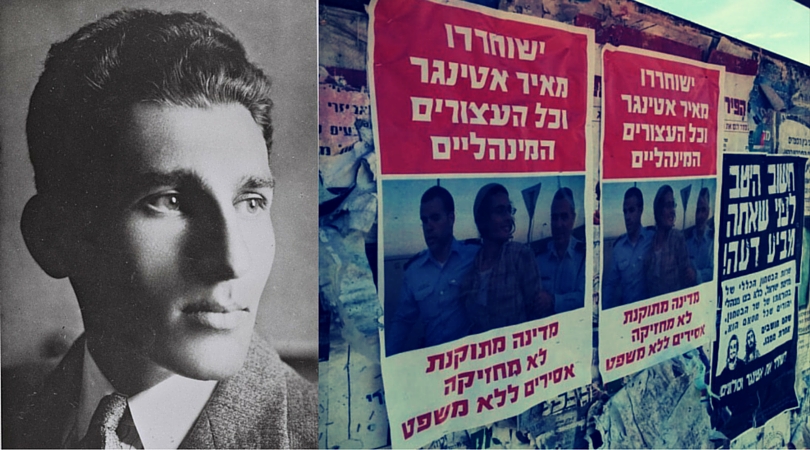 When one strolls the streets of Jerusalem these days, Meir Ettinger’s picture is everywhere. The posters demand justice for the young activist.  After all no one has charged him with anything and yet he remains in administrative detention, now for another four months.  Ettinger tried to influence the latest decision by going on a hunger strike, which rallied many rightwing activists behind him, but the security apparatus appeared unshaken.

The question that remains is what is the State of Israel so threatened by, which causes them to hold Ettinger for so long?

To answer this one must look back into the annals of Zionist history.

Although the Zionist movement’s goals were to attain statehood in the Land of Israel, the movement grew in various ways and approaches in reaching this goal. For most the state was a solution to a greater issue. Three distinct types of Zionism had formed by the time the Jews of the Holy Land revolted against the British Empire.

Settling the Land Leads to Sovereignty

Practical Zionism sprung forth in the late 19th Century by way of land purchases in Israel. Led by the “Lovers of Zion” movement Practical Zionists believed that the most important action to take was to settle as much of the Land of Israel as possible.  In their eyes independence would be driven by control and could only be sought after once the land was settled.  Statecraft was not on their radar.

Speeches Will Gain Us Standing

Political Zionism took to heart the failure of the European Jews’ emancipation and decided to win supporters for resettlement in the Land of Israel.  Those who ascribed hope for the Jewish Nation in the international community believed that a Jewish State could be attained by appealing to “friendly” nations of the need to avoid a Jewish catastrophe.

Herzl was a Political Zionist.  Although the World Zionist Congress and World Zionist Organization (under Jabotinsky) achieved global notoriety, sovereignty was not decided in the halls of law around the world.  Only one form of Zionism merged all the necessary components to be able to take on the British Empire.

Zionism is about National Jewish Liberation

When Menachem Begin became the head of the Irgun he adopted the Lehi’s outlook on Revolutionary Zionism.  This is of course not a surprise as the Israel Eldad became the philosophical head of Lehi after Avraham Stern was killed. Eldad and Begin were good friends and chess partners. Their brand of Zionism saw the direct need to push each and every occupying power out of the Land of Israel.

Zev Golan writes in his book Stern and his Gang, “For Lehi, sovereignty was not a solution but a goal, an expression of Jewish culture, as any nation-state is the expression of a people’s culture. The few hundred Lehi fighters of 1943 declared themselves determined to fight  war to liberate the homeland from the foreigner.  It mattered not to them whether this foreigner was Turk, as it had been, British as it was then, or someone else in the future.”

The Lehi fighters desired to “establish the Hebrew kingdom based on our historic rights, on our national desire as expressed in all the messianic longings and attempts [Lohamey Herut Israel, Collected Writings].”

When we succeeded in chasing the British Empire out of the Land of Israel, the nation was not ready for its destiny.  It’s true the State of Israel is successful, but goals of the Zionist Revolution as envisioned by Begin and Eldad have never been accomplished.

Building a true Jewish State, one that pushes its sovereignty to all corners of our biblical promise has not come about.  Large areas of our ancestral homeland lie under the feet of foreign occupation.  The Temple Mount, “liberated” by fearless Jewish warriors in 1967, stands defiled and trampled by the urinating masses of Muslims who care more about controlling the holiest site to Jews than treating it with respect.

Jews are still murdered for daring to return to their ancestral homeland and politicians care far more about Western values than being proud Jewish leaders.

Meir Ettinger was arrested six months ago, and is still confined because he dared to speak the truth.  There have been no charges filed against Meir, but he is the most “dangerous man in Israel.” Why? Simply, because he called for the revolution to continue.  And why not?  Afterall Jewish destiny at the end of the day is Messianic. Meir’s revolt was not physical.  If it was it would not last.  The government in Israel is scared of the most potent revolt of all, an awakening that we have incomplete work here.  For that the elites who run the State of Israel are truly scared.

They are scared because their destiny expresses the internal struggle held within.  That we may actually be who we say we are and our return is more than just a temporal liberation, but rather the ultimate liberation which if allowed to reach fruition can liberate the entire world.

Deep down inside we all know the system we live in is a system that defines state institutions as divine. However, a system that disconnects itself from its divine mission does not get to claim inherent divinity.  Divinity is attained by expressing that which is held within each one of us.  The Zionist Revolution will only be complete when the State returns to the mission it was intended for and that is the complete and total liberation of Zion with the goal of setting up a true and righteous kingdom.