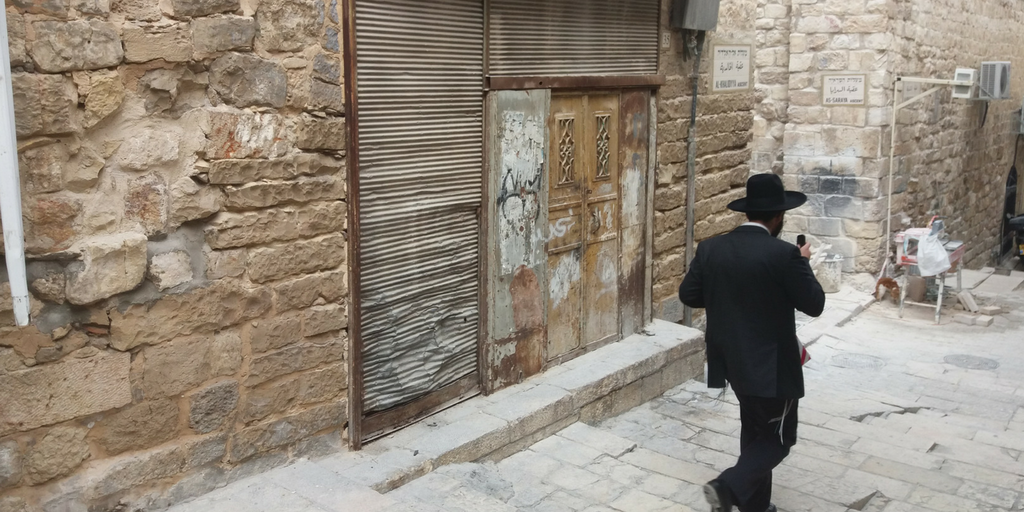 On el Khaladiya, the heart of Northern Jewish Quarter, another former Jewish home has been restored to Jewish hands.  The Supreme Court shot down the claims of the Arab occupants that the home had been theirs.  For the time being only the store front which covers over the former home behind it has been returned.  The older Arab woman who tried to defend her right to live there can remain above for the next ten years if she really does move in.

El Khaladiya street was once known as Hebron Street and was the main street of the Jewish Quarter in pre 1948 Jerusalem’s Old City.  Starting in 1920 and until the Jewish residents of Jerusalem’s Old City were expelled by the Jordanians in 1948 a series of Arab pograms allowed byt the British pushed the indigenous Jews into small quarter of the Old City.

Now with the recent reacquisition of the latest property, El Khaladiya feels more and more like another Jewish Quarter.

Despite the claims of the squatters, Jewish students from nearby Yeshivas that have started renovating the property found a piece of evidence that proves Jews were the original occupants of the building, a hole for fastening the mezuza to the doorpost of the apartment, which was covered up by the squatters.

“This entire street was once Jewish.  What we see here is the court righing an historic injustice,” Rabbi Ben Packer said as he pointed out other properties about to be handed back to the original Jewish owners.

Mezuzah Hole, once covered to hide the original Jewish presence

Volunteer pointing out the mezuza hole.