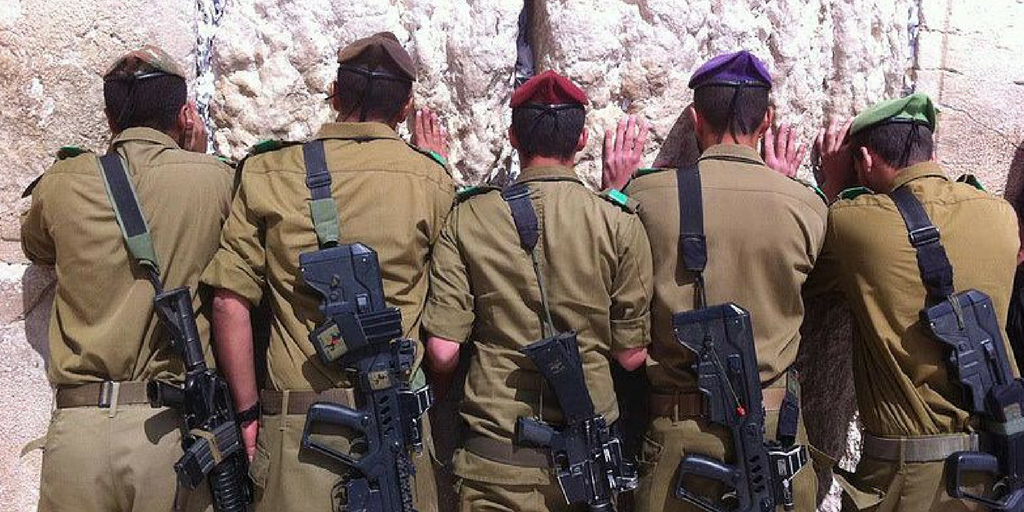 “Pharaoh approached; the Children of Israel raised their eyes and behold! – Egypt was journeying after them, and they were very frightened; the Children of Israel cried out to HaShem. They said to Moshe, ‘Were there no graves in Egypt that you took us to die in the Wilderness? What is this that you have done to us to take us out of Egypt? Is this not the statement that we made to you in Egypt, saying, Let us be and we will serve Egypt? – For it is better that we should serve Egypt than that we should die in the Wilderness!’

Moshe said to the people, ‘Do not fear! Stand fast and see the salvation of HaShem that He will perform for you today; for as you have seen Egypt today, you shall not see them ever again! HaShem shall make war for you, and you shall remain silent.’” (SHEMOT14:10– 14)

Acknowledging that Israel greatly outnumbered the Egyptian military at the Sea of Reeds, the Ibn Ezra provides a remarkable explanation of the above verses. He writes: “How could a camp of six hundred thousand men fear their pursuers? Why should they not fight for their lives and the lives of their children? The answer is that the Egyptians had been Israel’s masters. The generation leaving Egypt had learned from childhood to endure the Egyptian yoke and they possessed a low soul. Being weak and unaccustomed to warfare, how could they now fight against their masters? We see that Amalek came with a small force and, if not for Moshe’s tefillah, they would have weakened Israel. G-D alone does great deeds and orchestrates events. He arranged for all the males who had left Egypt to die out – because they lacked the strength to fight the Canaanites – until another generation arose who had not seen exile and who possessed an exalted spirit.”

The Ibn Ezra teaches that despite their superior numbers, Israel was not commanded to stand and fight. The Hebrews had been conditioned by several generations of slavery to fear and obey their Egyptian masters. Possessing a low soul made them near incapable of warfare, thus requiring Moshe’s tefillot to later overcome the Amalekite ambush (SHEMOT 17:8-13). According to the Ibn Ezra, this low soul was the reason that the generation departing Egypt would later need to die out in the desert over a forty-year period. Their children – a new generation raised in freedom – would then be able to wage a war of liberation against the Canaanite kings.

The low soul that the Ibn Ezra speaks of is similar to what modern psychologists term “learned helplessness.” At various historic points, this slave mentality has prevented the Jewish people from successfully advancing our national mission. One example of this neurosis in recent decades has been the confusion among many scholars concerning the process of redemption and how the Jewish people must relate to – and interact with – the historic events unfolding in modern times.

Israel’s Prophets and ancient Sages teach that there are two ways in which the final redemption can occur. There is the miraculous way (aḥishena) and the more mundane natural process (bi’eta). Due to the bitter realities of life in the Diaspora, Jewish communities in recent centuries were conditioned to believe that the redemption could only transpire through open miracles. Taking the initiative to advance salvation through physically conquering the Land of Israel was scorned as forbidden by many rabbis who claimed that Israel must sit patiently and wait for the Kadosh Barukh Hu to redeem His people. In the ghettos of Europe, where day-to-day life included a fear of gentile persecution, the idea of Jews valiantly recapturing Eretz Yisrael by force of arms seemed as if it would be even more an aberration of the natural order of the world than HaShem performing supernatural miracles on our behalf. As a result of this reality existing for so long, many Jews became trapped in this mindset of helplessness even once the political reality surrounding them had changed.

Other factors also contributed to the Jewish idealization of learned helplessness. Because of the internal damage inflicted upon Israel by so many unsuccessful messianic movements, the study of the redemption process was halted in most houses of study throughout Europe, leading to any attempt at bringing salvation closer through human efforts becoming widely seen as tantamount to an act of heresy. The combination of these factors created an expectation that the redemption would occur through supernatural events above and beyond human participation. Practical efforts to achieve redemption came to be viewed as destructive behavior stemming from a weakness of faith.

Learned helplessness became most prevalent in Jewish circles during the decades leading up to the development of political Zionism. The handful of Torah giants at the time who understood that Hebrew liberation could – and most probably would – unfold through a series of natural historic events were unable to effectively spread their ideas or inspire the faithful masses to actively participate in the redemption process. But examining the words of these visionary scholars can help us to retroactively recognize how correct they truly were and how much their teachings still illuminate our proper path.

Rabbi Yehuda Ḥai Alkalai, the famed kabalist of Sarajevo, wrote of redemption from within in Raglei Mevaser. In it he explains: “Redemption will reach us in a natural way. Had the Almighty wished to redeem His people through miracles, the exile would not have lasted so long. Moreover, in the present Jewish situation even a naturally attained redemption would be miraculous. Redemption will grow from within the people and not with the Messiah performing miracles, as in the days of the Exodus from Egypt. Final redemption will be the result of national initiative aided by G-D, as it is written: ‘And the Children of Judah and the Children of Israel will be gathered together’ (HOSHEA 2:2), and ‘Shake yourself from the dust, arise and sit down, O Jerusalem, release the bonds from around your neck,’ (YISHAYAH 52:2). Yishayah uses the reflexive form to emphasize that redemption will stem from self-help.”

In his Reply to the Skeptics, Rabbi Eliyahu Guttmakher states: “To our great misfortune there are yet many who mistakenly believe that they will sit in the comfort of their homes when suddenly a voice from heaven will proclaim redemption. But it will not be so! The Babylonian exile, though destined to last no more than seventy years, required the practical leadership of Daniel, Ezra and Neḥemia to achieve a significant return toEretz Yisrael. Unlike many of our own contemporaries they did not say ‘let every man remain at his place and redemption will come of itself.’”

Rabbi Zvi Hirsh Kalisher illuminates the way to redemption in Drishat Tzion. He writes: “It is wrong to believe that redemption will come as a sudden revelation of G-D from heaven, calling upon His people to leave the Diaspora. The vision of the Prophets must come true, but not as a sudden event. Final redemption will come in stages with the return of the people to the land and ultimately by the coming of the Messiah. Dear friend, you must rid yourself of the illusion that the call of the Messiah will come as a bolt from the blue arousing the sleeping masses. Redemption will come about through an awakening of well dispersed gentile leaders and governments, viewing favorably the return of Jews to the Holy Land.”

In regards to Rabbi Kalisher’s last point, Rabbi Yaakov Moshe Ḥarlop – a prominent disciple of Rabbi Avraham Yitzḥak HaKohen Kook and former head of Yeshivat Merkaz HaRav – teaches in the sixth volume of Mei Marom (Mayanei HaYeshua) that initial gentile support for Israel’s return to our land must eventually give way to hostility from the international community in order facilitate a later stage of the redemption process that will force the Jewish people to become independent through the realization that our strength and security stem not from alliances with other nations but directly from our relationship with the Kadosh Barukh Hu.

In Awake, Rabbi Shmuel Mohilever teaches: “Even though natural events will lead to redemption, this is not simply an historical accident. There are no coincidences in the Universe, since G-D’s Will is also manifested in the course of natural events. Accordingly, it is for us to rouse the powers that be to treat the Jewish people favorably, whereupon Divine help will surely be forthcoming in the ingathering of the exiles to the Holy Land. As the Prophet proclaims (YISHAYAH 62:10): ‘Go through, go through the gates; clear the way of the people; cast up, pave the road; clear it of stones; raise a banner over the peoples.’ Yishayah’s intention is clear: we must awaken and do all in our power to clear away the obstacles in the path of our redemption.”

These scholars stressed the fact that human initiative would be necessary in bringing Israel’s redemption to fruition. Their ideas were highly advanced for their time – especially when compared with many of their contemporaries – and their teachings represent a Torah of action that challenges the psychological state of learned helplessness. While it is clear that we have still not yet tasted full redemption, the process has certainly begun to unfold. There exists a sovereign Hebrew state in much ofEretz Yisrael but in order for us to participate in bringing total salvation, a higher approach to Torah study must be adopted.

The holy Ohr HaḤaim speaks of redemption and self-awakening in his commentary on VAYIKRA 25:25. There he states: “Redemption will start with a stirring in men’s hearts urging them: Do you feel secure living in a strange land, exiled from your G-D? What pleasure does life offer so far removed from the lofty values that were yours in the presence of the Almighty? Superficial, ill-conceived desire will then become repulsive and a spiritual craving will awaken your soul, improving your actions until G-D will redeem. Who will be called to stand in judgment? The Jewish leaders of the Diaspora who throughout the years did not encourage their people to return to Zion. They will be made to bear the shame of a forsaken homeland.”

In Eim Habanim Smeiḥah, written during the Holocaust, Rabbi Yissakhar Shlomo Teikhtal echoes the Ohr HaḤaim’s statements on the dangers of passivity. “The Orthodox, on the other hand, those zealous for G-D’s Will, stood aside and took no part in this effort. They remained with their traditional view that ‘sitting back and doing nothing is best’… It seems to me that all the leaders who prevented their followers from going and joining the builders [of Eretz Yisrael] will never be able to cleanse their hands and say ‘our hands have not spilt this blood.’”

A new generation has arisen today, alive with a more vibrant Torah of redemption. It is a generation infused with an exalted spirit of vitality as Israel’s youth is again being raised on our natural soil. The homeland – which had for so long refused to provide fruits to any stranger – has blossomed under the renewed political sovereignty of her native people.

The vitality infused into the Jewish people today has inspired incredible acts of valor and self-sacrifice, even amongst those not observant or even knowledgeable of mitzvot. At nearly impossible odds, Israel has won miraculous victories over our enemies. We have liberated portions of our homeland and revived the Hebrew language after many long centuries of separation from both. These incredible events are part of a greater process prodding history forward as Israel returns to the international stage in order to ultimately shine blessing and light to mankind. HaShem has inspired a new generation with a lofty spirit uncorrupted by fear, passivity or the learned helplessness of the Diaspora. Israel’s youth demands a greater and fuller Torah that encompasses and infuses all aspects of life with the necessary strength and courage to usher in an era of universal redemption.