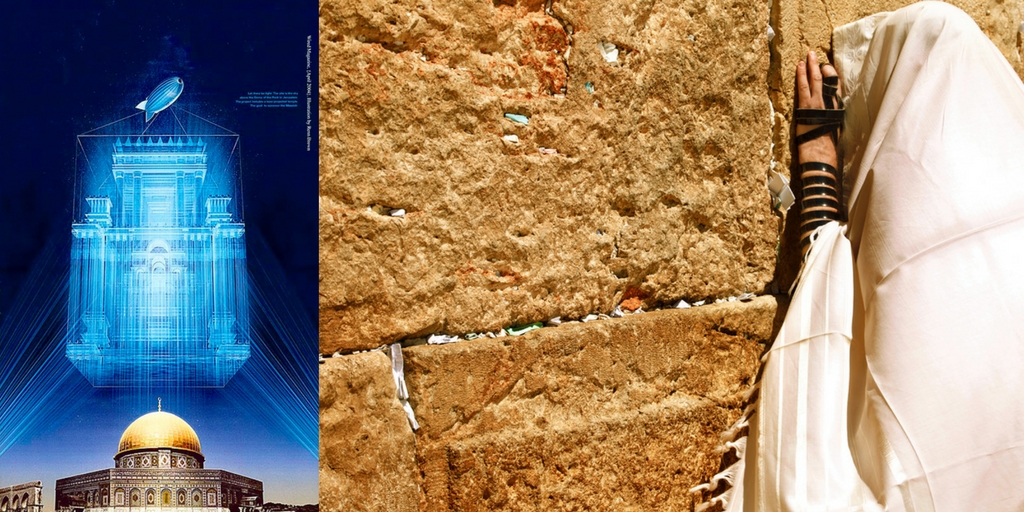 Originally Published on the Global-Report

The Sabbath before the Ninth of Av (the 11th month in the current Hebrew calendar) is called “Shabbat Ḥazon” (the Sabbath of Vision) and in it we read in the Torah the first Portion of the Book of Devarim – Deuteronomy – and continue with the reading from the Prophets (Haftarah) the vision that begins the Book of Isaiah, “The vision of Yesha’yahu the son of Amoẓ, which he saw concerning Yehudah and Yerushalayim…”, which contains admonishments.

Only the next chapter (not included in the Haftarah), deals with the reward for the penitence from sin and brings a comprehensive prophetic vision, “The word that Yesha’yahu the son of Amoẓ saw, concerning Yehudah and Yerushalayim. And it shall come to pass in the last days,[1]that the mountain of the Lord’s House shall be established on the top of the mountains, and and shall be exalted above the hills; and all the nations shall flow unto it. And many people shall go and say, Come, and let us go up to the mountan of the Lord, to the house of the God of Ya’ạqov, and He will teach us of his ways, and we will walk in his paths; for out of Ẓiyyon shall go forth Torah, and the word of the Lord from Yerushalayim. And He shall judge among the nations, and shall decide among many people; and they shall beat their swords into plowshares, and their spears into pruning hooks; nation shall not list up sword against nation, neither shall they learn war any more” (2:1-4).

The Ninth of Av is the commemoration day for the destruction of the Temples of Jerusalem, whereas the vision of Isaiah is the consolation and restoration for their destruction. There is therefore a Hassidic tradition due to Rabbi Levi-Yitzhaq of Berditchev that was disseminated by the Ḥabad (Chabad) leaders,[2] according to which the Sabbath before the 9th of Av is the very time when “each one of Israel is shown the future Temple from afar”.

The presentation of the outline plan of the temple is a precondition for its realization, as is written in the prophecy of Ezekiel “Thou son of Man, describe the house to the house of Yisra’el, that they may be ashamed of their iniquities; and let them measure the pattern” (43:10). For those of you who have not had yet the occasion to see this vision, allow me to present the plan of the future Temple as it arises out of the Torah readings of Shabbat Ḥazon. This is a plan that is easy to understand now, in 2010 (5,770) but would have been difficult to understand in, say, 1948 or 1968.

The first thing in a plan, yet before dealing with forms and design, is defining the function that the planned structure or system should serve. This function is indeed defined in the vision of Isaiah cited above – a universal temple that would serve as place of instruction to all nations. Another prophecy of Isaiah adds “my house shall be called a house of prayer for all peoples” (56:7). The location is, as we saw, in Jerusalem – “for out of Ẓiyyon shall go forth Torah, and the word of the Lord from Yerushalayim”, and the prophecy also gives a preliminary indication of a form – the Lord’s House shall be established on the top of the mountains, and shall be exalted above the hills”, from which we can learn that the intention is not for a replication of the Second Temple, because even Herod’s Temple, with all its glory, when it served a multitude of pilgrims, was lower than the hills that surround the Temple Mount.

The verse continues: “and He will teach us of his ways”, teaching us that the future temple would be, primarily, a place of study and instruction. Even the Second Temple did not serve, as far as we know, as primarily a place of instruction and study. It is actually the institution that replaced the temple – the Yeshivah (Torah academy) – that suggests an interesting model – the temple as a universal Bet Midrash (house of exegesis) for the discussion and interpretation in order to elucidate the divine will, how to fulfill the stipulated demands, such as: “Learn to do well, seek judgment, relieve the oppressed, judge the fatherless, plead for the widow” (1:17). First “..restore thy judges as at the first, and thy counselors as at the beginning; afterwards thou shall be called, The city of righteousness, a faithful city. Ẓiyyon shall be redeemed with judgment and those that return to her with righteousness” (1:26-27).

As a planner, I learnt that before starting to plan it is incumbent to identify the number of users and the nature of their behavior. This is indeed given in the Torah portion of Shabbat Ḥazon – Parashat Devarim, where Moses blessed the people of Israel “The Lord your God has multiplied you, and, behold, you are this day like the stars of heaven for multitude. The Lord God of your fathers make you a thousand times so many more as you are…” (Deut. 1:10-11). The number of the tribesmen of Israel, the nation that Moses guided, was more than 600 thousand men of army service (not counting women, old people and children). Moses had much difficulty administering to such a great number, yet his hope and his vision was that there will be “a thousand times so many more as you are” – that is, that in the future the constituency of Israel will number more than 600 millions, all of them potential users of the temple! Moses the prophet (of the tribe of Levi) did not predict the appearance of a “Jewish People” of hundreds of millions, but a public that relates to all the Twelve Israelite Tribes, which will be constituted, as Isaiah defined, from “all the nations” and of “many people” who recognize the Lord God of Israel and the importance of Jerusalem-Ẓion as the place for cleaving to Him. Let us mention also that such a gigantic number of users becomes manageable only nowadays, when humankind numbers in the billions and the Internet and social networks (e.g. Facebook) connect hundreds of millions.

The Haftarah states quite clearly that the desirable temple worship is not the sacrifice of animals: “To what purpose is the multitude of your sacrifices to me? Will say (in future tense: yomar-יאמר, that is, in the future Temple) the Lord (YHWH) I have been sated (savaạti, past tense) with the burnt offerings of rams, and the fat of fed beasts; and I desired (in past tense, lo hafazti, that is, in the past temples) not in the blood of bullocks, or of lambs, or of goats” (1:11), but “wash you, make you clean; put away the evil of your doings from before my eyes; cease to do evil, learn to do well”.

In the times of Isaiah, such utterances might have seemed blasphemy. But nowadays what may keenly interest hundreds of people in the establishment of the Jerusalem Temple cannot be the sacrifice of animals, not even “the glory of Judaism” (which might be a side product). A temple that may attract many millions must fulfill actual collective needs, must serve the survival needs of contemporary humankind. The greatest current danger to world peace stems from conflicts between “The Children of Abraham” that may bring about a world war – the conflict between “the world of Islam” and the Christian (and Jewish) or “Western World”. The peril of the conflict between “The Children of Abraham” is from nuclear terrorism, which cannot be contained through “balance of threat” between countries. Yet this conflict is not an essential conflict between religions but conflict between certain interpretations of scriptures. The prevention of this conflict would be possible only by way of comprehensive cultural and inter-religious change, in which millions of citizens from all the religions will desire reconciliation and the prevention of terrorism and will be ready to act to bring these about. The symbolic essence of the conflict is at the Jerusalem Temple Mount. The visionary temple that is required is therefore a facility of mass-yet-particular education that will rectify the contradicting interpretations between the religions and would assist its users to find the points of partnership and of mutual understandings.[3]

The precise wording of Rabbi Levi-Yitzḥaq of Berditchev is “each one of Israel is shown the future Temple from afar”. This expression derives from the Binding of Isaac (Yiẓḥaq) where it is written that, at first, “Then on the third day Avraham lifted up his eyes, and saw the place from afar” (Gen. 22:4); and then, when the trial was over, “And Avraham called the name of that place YHWH yir’eh (will see, future tense) as it will be said (ye’amer) today, In the Mount the lord will appear”. This way our forefather Abraham already fixed for future generations the place to which his descendents should be aligned to and where they would be able to reach reconciliation – he already fixed then what will be seen and what will be said today concerning the epiphany (divine appearance) at the Mountain of the Lord. Abraham observed the site from a distance of time – a thousand years before David and Solomon and almost four thousand years before our time.

But concerning the physical distance and aspect, there is a difficulty here, as we have already mentioned that the Temple Mount is lower than the surrounding hills and it is not possible to view it from far off. Rashi (the foremost Jewish Torah commentator) explained it in his interpretation of the verse “‘Avraham lifted up his eyes, and saw the place from afar’: what did he see? He saw a cloud tied to the mountain”, this means that he saw that the future temple will include a fixed cloud, bound and tethered to the mountain, while its top is in the skies, so that it is necessary to lift eyes to it and possible to see from afar. We may also recall that Rashi stipulated that “the future Temple that we are expecting will be built and perfected and will be revealed as coming from heaven… ”.[4] Such a cloud, that can be artificially provided and enclosed, could serve as a giant 3-dimensional screen for holographic projections of lights arrays that may present the temple and the results of its worship,[5] and may be seen from Tel Aviv to Amman. It will allow to present upon it the (moral and conscious) Ascent to the divine world, a kind of Jacob’s ladder.

When the form of the Temple would appear in the skies as a “Temple of Light” built up of “Living Stones” of lights and reflections, this would remove the main impediment to the realization of the Temple in our times.  What has historically replaced the Temple was, as noted, the Yeshivah – the place of conversational learning – and the shrine of the dome of the Rock is uniquely suitable to serve as a ceremonial multi-faith Yeshivah in which the distinguished pilgrims, the elect (meẓuyanim) among the religions and tribes, would engage in parallel “disputations for the sake of heaven” combined with prayer and appeal for divine guidance to find the straight path for peace and reconciliation.

[1] For an explanation why these “last days” are our present, see Introduction for the Re-GENESIS NOW exegesis.

[3] The Qur’an states explicitly: To each among you, we have prescribed a law and a clear way. If Allah willed, He would have made you one nation, but that (He) may test you in what He has given you; so strive as in the race in good deeds. The return of you (all) is to Allah; then He will inform you about that in which you used to differ” (Surah 5, the Table, verse 48 (official Saudi version). The place marked for this gathering, according to the Bible and also to the Islamic traditions, is the Temple Mount in Jerusalem

[4] Talmud Bavly, tractate Sukkah page 70a and Tosafot there; Tractate Shavuot 15b

[5] Article on cloud and smoke in the future temple