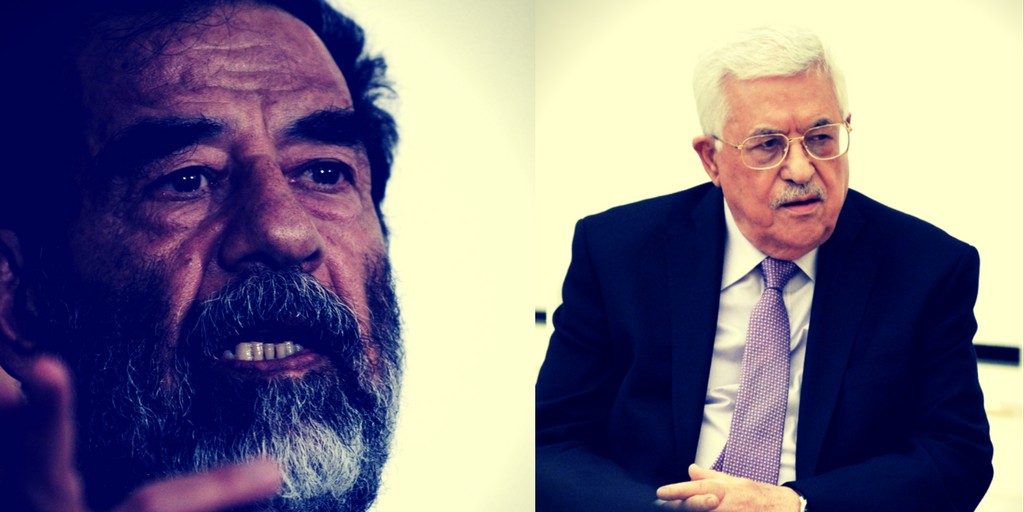 A tree may grow in Brooklyn, but a Saddam Hussein memorial has grown in Qalqilya.

Qalqilya is one of those ancient, historic “Palestinian” cities. So it dates back all the way to 1893. The population of Qalqilya more than quadrupled under Israeli rule. That’s typical of Zionist genocide which somehow vastly increases the number of Arab Muslims and their shrill accusations of genocide.

In the ancient 19th century Palestinian city of Qalqilya, dating back all the way to the days of President Grover Cleveland and the invention of the jukebox, Hamas is popular. It even elected its own mayor before he was removed from office and the Palestinian Authority’s Fatah was put back in charge. Politics in Qalqilya remains a pitched battle between Hamas and Fatah over who hates the Jews more and has the best plan for destroying them.

There isn’t much to do in Qalqilya except visit its zoo. The Qalqilya Zoo is the worst zoo in the world and embodies everything wrong with “Palestine”. Israelis helped set up the zoo as a gesture of peace. It was supposed to be a “jewel in the crown of Palestinian national institutions.”

Recently, a bear ate a 9-year-old boy’s arm at the zoo. The zebras and the giraffes allegedly died as a result of Muslim attacks on Israelis near the zoo. The self-taught taxidermist who runs the zoo has an exhibition of dead animals he has stuffed and mounted, and whose deaths he blames on Israel.

Like everything else about “Palestine”, Israeli goodwill ended in death and anti-Israel propaganda.

But Qalqilyans or Qalqilyites now have something else to do besides get their arms ripped off by a bear or visit one of the city’s 26 mosques. They can stop by the Saddam Hussein Memorial.

One side of the memorial has Saddam Hussein in a beret saluting himself. The other shows an older Saddam waving his rifle in the air. If the city fathers of Qalqilya had been more on the ball, they could have acquired the Ruger M77 bolt-action rifle in question for under $50K after it was taken from the rubble of his presidential palace in Mosul and sold at auction by a senior CIA officer in Baghdad.

The Saddam Hussein Memorial bears such cheerful welcoming messages as “Saddam Hussein – The Master of the Martyrs in Our Age,” and “Arab Palestine from the River to the Sea.”

Governor Rafi Rawajba compared Saddam, Arafat and Mahmoud Abbas: the current head of the Palestinian Authority. “Saddam was an emblem of heroism, honor, originality and defiance, as was the martyr Yasser Arafat.”

“President Abu Mazen (Mahmoud Abbas) makes sure to follow in the footsteps of these two great leaders,” he gushed.

Qalqilya Mayor Othman Daoud, also of Fatah, had previously paid tribute to Saddam for sticking to “his principles and the Palestinian cause until his death as a Martyr.”

The governor of Qalqiliya was appointed by Abbas. While the Palestinian Authority president doesn’t have Saddam’s arsenal or snazzy berets, he has the same affinity for democracy as Saddam.

President Abbas was elected to a four-year term in 2005. It’s been the longest four years ever.

Governor Rafi Rawajba was appointed by Abbas, not elected. He’s a member of Fatah, which is the political movement that dominates the PLO, and the PLO runs the Palestinian Authority. Also present was an official from the Arab Liberation Front which is also part of the PLO. The ALF was a project of Saddam Hussein and he used it to hand out cash to the families of Islamic terrorists in Israel.

Before the latest Iraq War, the ALF promised to hand out a million dollars to terrorist families. The Bush administration used that as evidence that Saddam Hussein supported terrorists and had to be removed.

The ALF claimed that Saddam had handed out $35 million to terror families in 3 years. The Palestinian Authority pays out over $300 million a year. It’s currently at $355 million.

The PA spends 10 times more on terror payments in 1 year than Saddam did over 3 years.

And the best part is that most of the money comes from us. The Palestinian Authority doesn’t have much of an economy. It relies on foreign aid. Some of that money comes from Europe, Japan and the Saudis. A whole lot of it comes from Americans.

Even while we were fighting to remove Saddam Hussein, we were funding the PLO which included a faction under Saddam’s control that was doing the very thing we were condemning him for.

The Taylor Force Act, named after an American veteran of Afghanistan and Iraq murdered by a Fatah-supported terrorist, is slowly wending its way through Congress. If it isn’t neutered, it will cut off some of our aid to the Palestinian Authority until it stops funding terrorism.

Palestinian Authority television reported that, “In Qalqilya, hundreds of citizens accompanied by the body of Martyr Bashar Masalha.”

“The Martyr Bashar Masalha returned from Qalqilya to his village Hajja in a procession,” PA TV gushed, describing the burial of a terrorist who had murdered an American as a “national wedding” in which he was “embraced by the soil of his homeland as a Martyr.”

Qalqilya is not the only Muslim settlement in Palestinian-occupied Israel to have its own Saddam Hussein memorial. There’s one in Beit Rima, a town square in the Palestinian Authority’s capital of Ramallah and a UN refugee center in Jenin.

And, if business goes on as usual, the PA will be funded by hundreds of millions in taxpayer money.

Maybe it’s time we finally stopped funding the Palestinian Authority, its terrorists and the aspirations of its dictator to follow in Saddam Hussein’s footsteps.

If the Muslim colonists of the Palestinian Authority want to continue their war with Israel over settlements like Qalqilya illegally built on the indigenous territory of the Jewish people, they can do that without our help. As they were doing it without our help for decades until Bill Clinton decided that a greasy Egyptian former Muslim Brotherhood member named Arafat was his key to a Nobel Prize.

American taxpayers are paying Muslim terrorists to murder Americans. We’ve poured money into the Qalqilya Governate which has benefited from numerous USAID projects. And, in return, the locals are erecting monuments to Saddam Hussein. And a Fatah thug appointed by President Abbas, the dictator we subsidize with hundreds of millions a year, claims that Abbas is following in the footsteps of Saddam.

After spending thousands of lives in Iraq, we’re spending hundreds of millions of dollars funding a Palestinian Saddam.

Making the Taylor Force Act into law is the only decent thing to do. But Secretary of State Tillerson also needs to end the doubletalk about the Palestinian Authority’s funding of terrorism. And Abbas’ enablers, in the media and the Jewish world, have to be held accountable for the lies and the terrorism.

The Palestinian Authority’s terror boss has made it abundantly clear that he doesn’t want peace. The latest reconciliation effort with Hamas is another reminder of it. He isn’t interested in democracy either. Not unless the elections are rigged. What does Abbas want? If you believe his crony in Qalqilya, he wants to be Saddam Hussein. If he wants to follow in Saddam’s footsteps, he can do it without our cash.

Or the next Saddam Hussein memorial can be on us.