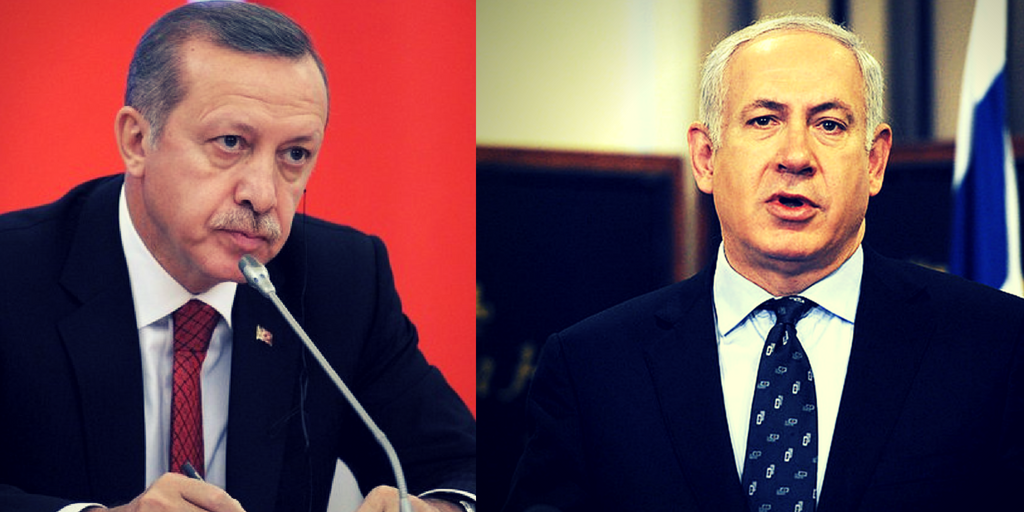 Turkey’s islamist and autocratic ruler President Recep Tayyip Erdoğan has taken the lead in the current international onslaught against Israel for its defense from Hamas terrorists.

“Israel is wreaking state terror. Israel is a terror state,” Erdogan told Turkish students in London. “What Israel has done is a genocide. I condemn this humanitarian drama, the genocide, from whichever side it comes, Israel or America.”

In response to Israel’s defense on the Gaza border, Turkey has recalled its ambassadors from both Israel and the United States.

In response to Erdogan’s comments Prime Minister Netanyahu responded by stating: “Erdogan is among Hamas’s biggest supporters and there is no doubt that he well understands terrorism and slaughter. I suggest that he not preach morality to us.”

Beyond supporting Hamas, it was Erdogan’s Turkish Armed Forces (TAF) that not only overran the Kurdish majority Afrin canton in Syria over a month ago, but killed thousands of what he called Kurdish terrorists.  Most reports indicated that many of those killed were civilians.  Of course as I noted in an article at the time, Erdogan selectively uses the word terrorist interchangeably when referring to groups of people he doesn’t like.

Netanyahu had said something similar in response to another outrageous Erdogan comment back in April: “Erdogan is not used to people responding to him, but he should start getting used to it. Anyone who occupies northern Cyprus, invades the Kurdish strip and slaughters citizens in Afrin, should not lecture us about values and ethics.”

I wrote the following in connection to the Prime Minister’s response: “The continuing realignment in the Middle East has begun to create chaos with a number of actors scrambling to pick sides. Donald Trump has clearly decided to pull the USA out of the mess, but that has only created more of a mess. Bibi’s statement about the Kurds and Cyprus is a hint of the role that Israel appears ready and willing to take on. This of course pits the Jewish state on a collision course with Turkey who has delusions of returning to the golden age of the Ottoman Empire.”

Since April Israel has strengthened its eastern Mediteranean alliance with both Cyprus and Greece with a direct visit to Cyprus by Bibi to strengthen Israel’s partnership on building the EastMed Pipeline last week.

The event was not lost on Erdogan, who stands to lose big on enhanced ties between Cyprus, Greece, and Israel. In fact Erdogan cited an east Meditereanean security threat due to Cyprus’ activities in the eastern Meditereanean.  Like anything else Erdogan doesn’t like, it becomes a dangerous security threat or essentially a false pretext to pick a fight.

Israel must continue to take the mantle of leadership it has been given and lead and remain undaunted in the face of faux moralists who twist the truth to suit their geopolitical needs. This is why Prime Minister Netanyahu quoted the prophet Zecharia at the embassy opening: “Jerusalem is the City of Truth.”