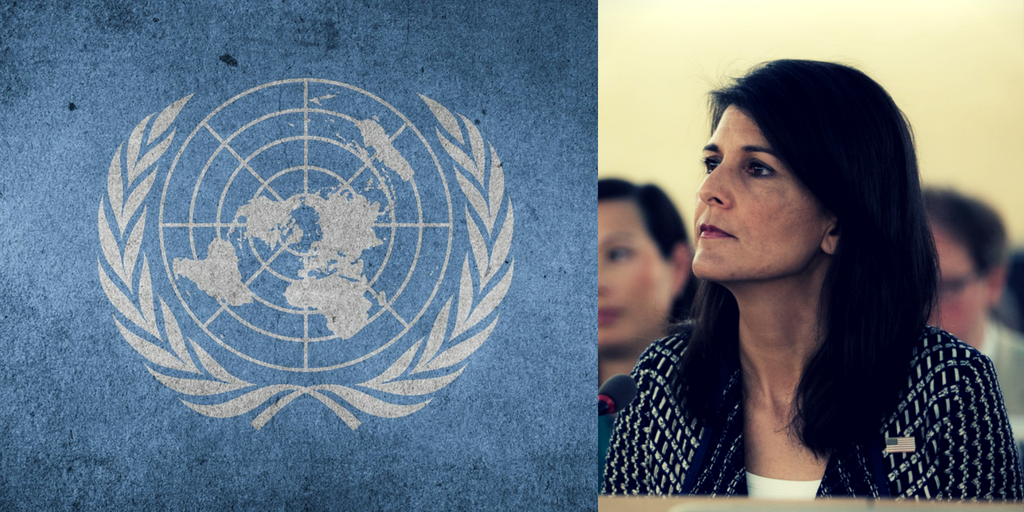 Nikki Haley keeps on showing why she deserves to be the United States Ambassador to the UN.  After her speech at the UN, where she defended Israel’s use of force against “Palestinian” terrorists dressed as protestors, she decided to lodge her own protest against the “Palestinian” Authority by walking out while its envoy Riyad H. Mansour was speaking.

RT @USUN: “I ask my colleagues here in the Security Council, who among us would accept this type of activity on your border? No one would.” pic.twitter.com/gh0ukdqCCp

Nikki Haley walking out as Palestine’s envoy to the UN begins to speak pretty much summarizes the US stance towards the Palestinians. pic.twitter.com/3GJJM48ewK

Mansour claimed Israel indiscriminately shot unarmed civilians and committed genocide.  Two claims proven false by Hamas’ own admission. Later he spoke with ABC outside saying:  “We condemn in the strongest term the atrocity by the Israeli occupying forces using this massive firepower against civilians who have the right to demonstrate peacefully, and they have been demonstrating peacefully.”

Mansour continued: “We demand that this action be stopped immediately, and we want those responsible to be brought to justice from the Israeli side because this is not allowed under the provisions of international law.”

Yet, Mansour’s claim the “Palestinians” were protesting “peacefully” has been proven wrong by Hamas’ own admission.

Hamas is nudging their (violent) demonstrators towards military positions by telling them the Israelis are abandoning their posts. pic.twitter.com/YZoJ1HjEIl

Here is just one of many examples of their “non-violent protest”:

Hamas is nudging their (violent) demonstrators towards military positions by telling them the Israelis are abandoning their posts. pic.twitter.com/YZoJ1HjEIl

and of course another example:

On @NPR, @NPRinskeep just asked a Gazan with a kite w a swastika on it what it means to him. “The Jews go crazy when you mention Hitler.” Steve Inskeep asked if he knows the Israelis are using the swastikas to discredit Gazans. “It’s what we mean. We want them to burn,” he said.

Nothing beats their own leadership admitting “these are not peaceful protests,”:

Senior Hamas Official Mahmoud Al-Zahhar on Gaza Protests: This Is Not Peaceful Resistance, It Is Supported by Our Weapons pic.twitter.com/aut0Q7SPD9