A few years ago I attended a high level meeting of pro Igbo Jewish activists, Rabbinic leaders, and political connectors in Jerusalem to discuss how real the Igbo claim of Israelite heritage and if so what was there to do about it.

No real press was allowed at the meeting and in many ways, although we reached some fascinating conclusions and a desire to help – nothing came of it.

There are approximately 30 million Igbo in southeastern Nigeria. Most identify with some sort of Hebraic connection, however those who follow mainstream halachic Judaism are few yet growing. A larger percentage – perhaps the majority, follow a Seventh Day Adventist approach to Christianity, which leans far more to a Hebrew Roots style of worship that appears on the outside to be very Jewish, despite a clinging to a different “messiah.”

The real connection the Igbo have to Israel is not with modern Judaism, but rather a form of actualized Israelite customs that our own sojourning relegated to memory. The bandwidth of laws that are similar to what we see in the Bible as well as familiar ones like Brit Milah, basic Kashrut, and Shabbat is astounding. Whether these came out from a need to connect to the Judaism they saw in the Bible centuries ago, or are an accurate expression of Israelite connection doesn’t matter – the Igbo not only believe, but have a deep culture of practice of the traditions called Omenana – “What you do in the Land.”

With this backdrop, Rudy Rochman, a pro Israel and indigenous rights activist as well as two others went to Africa to film emerging African Jewish communities, eventually finding themselves in Nigeria with the Igbo. Unfortunately for them, the Nigerian DSS associated their work with the free Biafra movement (a loose confederation of pro Biafran separatists sometimes connected to the Igbo).

Despite differences, Nigeria increasingly sees the Igbo movement for greater Hebraic awareness and the Biafran independence movement as growing more and more interconnected. Nigerian President Buhari, is a known radical Muslim who hates the Igbo. Unknown to them, the three Jewish filmmakers essentially walked into a far more complicated and dangerous situation than they assumed existed. Unfortunately they are still being held weeks later.

Despite the frustration and the danger Rudy, David, and Noam are in, their captivity may be part of something larger, a trigger for a wider redemptive awareness. While it is true, we as Israel don’t have the vessels or ability to sift through the myriad claims of connection from around the world, our awareness of a far larger purpose to our homecoming is necessary.

The Jewish return to the Land of Israel is a mere first step to a global redemption. It is not surprising since we liberated the Biblical Heartland and Jerusalem in 1967 that a tremendous awakening is now underway around the world. This awakening may not mesh with our assumption of what the Lost Tribes or the next stage of Redemption would be like, but that is only because our awakening is one of acceptance to something far greater than our exilic imagination permitted.

From the Pashtun in Afghanistan to the Igbo in Nigeria or the individual Christians who for whatever reason desire to return to the path of the Torah to the Bnei Menashe of East India, there is a sense that something profound is unfolding. Our assumption has been that in order to reach Redemption we in Israel only need to strengthen in following G-D’s will as found in the Torah and conquer the Land of Israel. What happens if the there is a another layer?

We know that the Redemption at the End of Days will be global – like a pebble dropped into a pond, the resulting splash has a center point, but radiates outward. This is what we are seeing now amongst the Igbo, the Abudaya in Uganda, and the Lemba in Zimbabwe. Are they Israelites? Not clear and nor does it matter – their attachment to the One G-D of Israel is what may tip the balance between darkness and light.

Perhaps Rudy and his friends are just some naive Jewish filmmakers or perhaps their captivity is a message for all of us that we have a responsibility to not only set them free, but to actually take the Igbo far more seriously than we currently do thus helping to release them from captivity as well. The Redemption just might depend on it.

Next Post The Exchanged Children - Why Are Things So Upside Down? 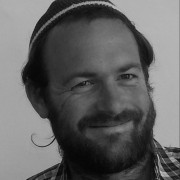