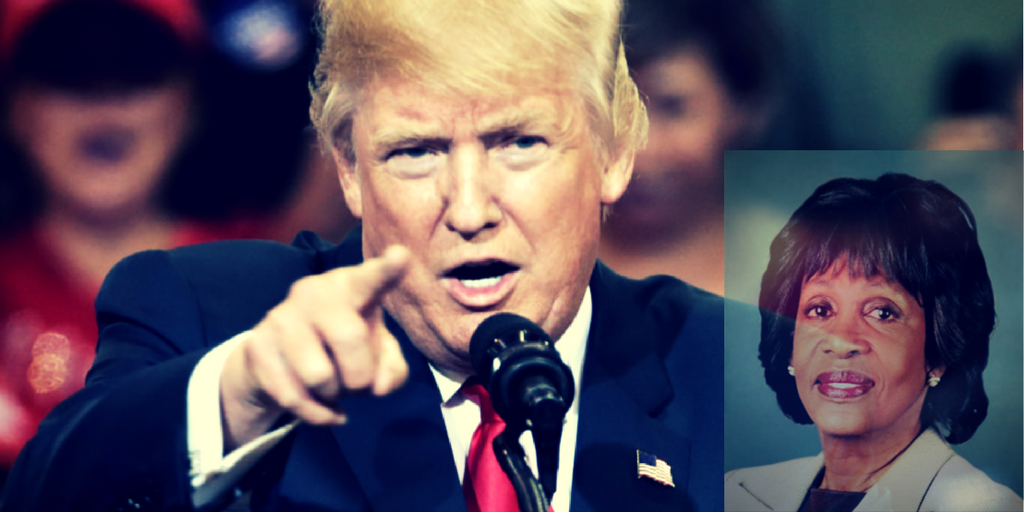 When Republicans stop apologizing, then they can start winning.

In 1992, Congresswoman Maxine Waters called President George H.W. Bush a “mean-spirited man who has no care or concern about what happens to the African-American community in this country.”

This was part of a National Press Club rant in which the fright wig from California also announced, “I believe George Bush is a racist.”

Waters tepidly backed Bill Clinton even though he, like “most whites in America are not good enough on the race question.”

Vice President Dan Quayle demanded an apology. No apology was forthcoming. “Dan Quayle doesn’t know me,” Waters told a cheering audience. “My mother couldn’t make me do that.”

When Bill O’Reilly joked about her wearing a James Brown wig, he was intimidated into apologizing. “Unfortunately, I also made a jest about her hair, which was dumb. I apologize.”

Meanwhile Maxine went right on hurling insults and threats at the President of the United States. “I’m out to get him. I’m gonna see him out of office.”

So much for that.

The left doesn’t apologize. It expresses no regrets. It just goes right on steamrolling its way forward. And if Republicans want to get anything done, they will have to fight the left just as hard as it fights them.

The big question is can Republicans fight? Or can they just fight among themselves?

It’s 2017. Republicans control the White House, the House and the Senate. Republican victories have swept states around the country.

So what’s the excuse now?

Republicans hold as much power as democratic elections are likely to give them. The goalposts can always be moved to utterly bulletproof majorities in the House and the Senate, 9 members of the Federalist society on the Supreme Court and the crowns of all the kings of Europe.

Instead Republicans may have achieved a golden moment that would be dangerous to squander. GOP gains have at least as much to do with the dysfunction of the Democrats under leftist rule. If Republicans are often the Stupid Party, Democrats have become the Crazy Party. And Republicans won record victories around the country in the expectation that they would stop the Crazy Party’s madness.

Instead it’s 2017 and Republicans continue to allow the left to set the agenda.

It’s time to realize that it’s not about which parts of government Republicans control, but about whether they are ready and willing to use whatever parts of government they do control in a coordinated effort to fight the left and force through a conservative reform agenda that will break the left’s hold on America.

After Republicans won, they decided to give Hillary Clinton and her scandals a pass. The left repaid their gentlemanly generosity by manufacturing a dozen fake scandals involving Trump and his people.

And Republicans were foolish enough to be roped into investigating them.

Instead of bringing those responsible for Benghazi, the Clinton Foundation, the IRS targeting and so much else to justice, Republicans decided to live and let live. But the left didn’t get the memo.

Obama funneled planes full of foreign currency to terrorists through Iran. He was caught on a hot mic assuring Putin’s man that he would have more flexibility after the election. China hacked our biggest national security secrets due to the actions of Obama appointees. But instead Republicans took the pressure off and let the Democrats manufacture a fake scandal out of every Trump hotel.

The left will not allow Republicans to implement their agenda. The only way for President Trump and Republicans to stop the scandal train and get anything done is to expose the crimes the left committed.

The Democrats have made it clear that they will only work with Republicans if they are in charge. They’ll confirm Supreme Court justices if Schumer picks them. They’ll legislate, instead of obstruct, if it’s to protect ObamaCare. And too many Republicans are still eager and willing to fall for it.

If Republicans want to get anything done, they will have to fight for it with courage and conviction.

Democrat majorities in Congress managed to set much of the agenda under Reagan and Bush, and Obama got almost anything he wanted done despite the opposition of a Republican legislature. All that happened because the left knows what it wants to get done and it doesn’t get bogged down for long.

Republicans get bogged down easily because they lack the same degree of conviction. It’s all too easy to run the same Alinsky games on them, to shame them, to make them doubt themselves, to drag them into aimless arguments and to control their actions by inducing a reflexive fear of political leaps of faith so that they don’t stray too far from the left’s policy plantation.

It’s 2017. Republicans control the White House, the Senate and the House. And they’re arguing with each other, investigating each other and waging an internal struggle that can only weaken their majority. And while many important executive orders have been issued and legislative steps taken, Republicans still find it easier to fight each other than to step up and fight the left.

As Freedom Center founder David Horowitz has frequently pointed out, Republicans don’t know how to fight. They think that winning elections is a substitute for the daily battles that the left loves to fight. The left doesn’t stop fighting once the election is over. That’s when it really begins fighting.

Republicans still believe that they can win on points. Too many of them think that some referee will step in and commend them for playing fair. And when that doesn’t happen, they panic and start surrendering. If the Trump era stands for anything, it’s a refusal to play the left’s game.

No amount of elections will ever be enough. When Republicans win elections, the left doesn’t recognize them. Republicans can hold the White House, Congress and the Supreme Court and it still won’t be enough because the left isn’t beholden to any values, laws, norms or standards. You can’t beat the left through any form of abstraction, whether it’s an election or a moral high ground. Republicans can only win by bringing real change and sweeping away the left’s power city by city and state by state.

The left refuses to surrender and apologize. It never backs down. If conservatives want to win, those are good places to start. When Republicans stop apologizing, then they can finally start winning.