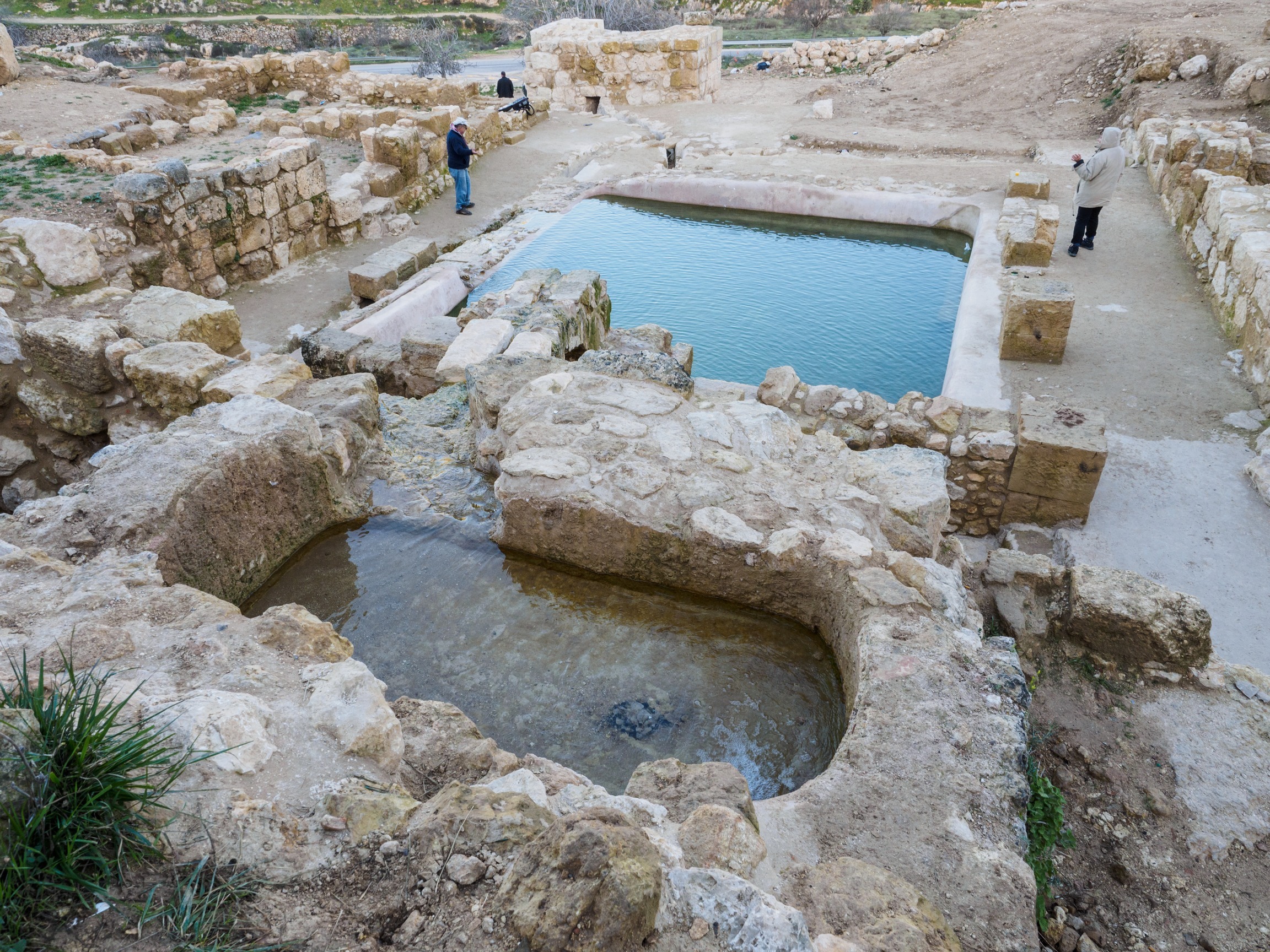 According to Irina Zilberbod, the excavation director for the Israel Antiquities Authority: “The most significant finding in the excavation is a large and impressive pool from the Byzantine period. This pool was built in the center of a spacious complex at the foot of a church that once stood here. Roofed colonnades were built around the pool that gave access to residential wings.” According to Zilberbod: “It’s difficult to know what the pool was used for – whether for irrigation, washing, landscaping or perhaps as part of baptismal ceremonies at the site.” The pool’s water drained through a network of channels to a magnificent and very special structure, the first of its kind known in Israel – a fountain (nymphaeon).”

Settlement in the area of Ein Hanniya apparently began at the time of the First Temple and perhaps even earlier. The most outstanding find from this period uncovered in the excavation is a fragment of a proto-Ionic capital – an artistic element typical of structures and estates of the kings of the First Temple period. The image of such a capital appears on the Israeli 5-shekel coin. Similar capitals have been found in the City of David in Jerusalem, which was the capital of the Kingdom of Judah, and at Ramat Rahel, where one of the palaces of the kings of Judah was found. Such capitals were also found in Samaria, Megiddo and Hazor, which were major cities in the Kingdom of Israel. According to the archaeologists, the site at Ein Hanniya may have been a royal estate at the time of the First Temple. After the destruction of the First Temple, settlement was renewed at the site in the form of an estate house that was inhabited by Jews.

The most significant find from this period is a rare silver coin, one of the most ancient so far discovered in the Jerusalem area – a drachma, minted in Ashdod by Greek rulers between 420 and 390 BCE.

The coins, pottery, glass, roof tiles and multicolored mosaic tesserae from the Byzantine period unearthed in the excavation attest to the fact that it was during this period (4th–6th centuries CE) that the site reached its zenith. According to Jerusalem District Archaeologist Dr. Yuval Baruch: “We believe that some early Christian commentators identified Ein Hanniya as the site where the Ethiopian eunuch was baptized, as described in Acts 8:26–40. The baptism of the eunuch by St. Philip was one of the key events in the spread of Christianity. Therefore, identifying the place where it occurred occupied scholars for many generations and became a common motif in Christian art. It’s no wonder that part of the site is still owned by Christians and is a focus of religious ceremonies, both for the Armenian Church (which owns the property) and the Ethiopian Church.”

Rare silver coin from the 4th century BCE, one of the most ancient ever discovered in the Jerusalem area. Photo: Clara Amit, Israel Antiquities Authority.

The Jerusalem Development Authority, the Israel Nature and Parks Authority and the Israel Antiquities Authority undertook conservation and development work at the site over the past few years. The result is an extraordinarily beautiful site incorporating archaeology, an ancient landscape and a unique visitor experience. The conservation work was carried out by a team from the Israel Antiquities Authority Conservation Administration. The team was headed by conservator Fuad Abu Ta’a, with architectural planning by architects Avi Mashiah and Yehonatan Tzahor. The work included restoration of the ancient water systems, which are now functioning once again. The original spring that fed the pool discovered in the excavation had dried up over the years, and major efforts were invested in channeling water from the existing spring to replenish the pools. The work revealed additional water sources under an impressive stone arch whose surroundings have been restored as a shallow wading spot.

A great deal of attention was paid to restoring the imposing fountain structure (nymphaeon), including cleaning and replacing stones in its façade based on historic photographs and paintings.