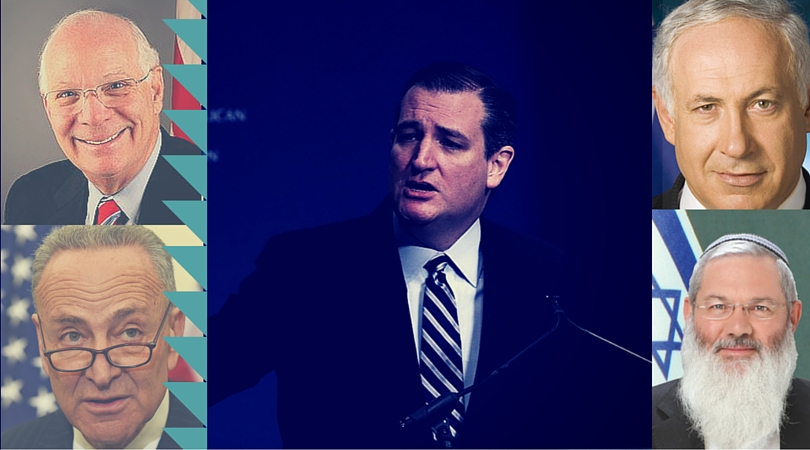 I have often times shocked my friends in admitting I never vote in American elections.  As a dual citizen of both the United States and Israel I am fully eligible to vote, but refrain from doing so.  Why? I am what you call a one issue candidate.  That issue is the security of the State of Israel. Although I believe our security here is of importance to the electorate in the USA, I feel it is wrong to help sway their vote in order to help my cause, which is overly and rightfully Israel centric.

With all of that being said, I cannot help but comment on the state of politics in my former country. Jews in America have done well in politics.  There are Jewish congressmen, senators, and now even Presidential candidates.  We have always excelled in all of the countries we have called home. From Joseph in Egypt to Daniel in Babylon/Persia.

We also have a habit (especially in modern times) of overplaying our hand.  Nowhere do we see this in the current presidential race as explicitly as the attacks coming forth from the National Jewish Democratic Council (NJDC) against Ted Cruz. These attacks are focusing on Pastor Mike Bickle’s comments in 2004.

““Let me tell you, these 20 million — less than 20 million Jews worldwide, there’s about 5 million in Israel, about another 15 million worldwide, a little bit less than that — those 15 million, God is going to bring them all back. Two-thirds will die in the rage of Satan and in the judgments of God and one-third, every one of the one-third, will be in the land before it’s over and they’ll be worshipers of Jesus … The Lord says, ‘I’m going to give all 20 million of them the chance. To respond to the fisherman. And I give them grace. And I give them grace …if they don’t respond to grace, I’m going to raise up the hunters … And the most famous hunter in recent history is a man named Adolf Hitler.’”

Bickle has endorsed Ted Cruz for President saying the following:

“Our nation is in a great crisis in this hour. We need a president who will first be faithful to honor God’s Word. We need a president who will work to defend religious liberty, uphold our Constitution, keep our country safe and our economy sound, and speak truth to the nation. We have been praying for righteous leaders and Ted Cruz is such a leader. I am enthusiastically endorsing Ted Cruz.”

Ted Cruz has touted the endorsement saying, “I am grateful for Mike’s dedication to call a generation of young people to prayer and spiritual commitment. Heidi and I are grateful to have his prayers and support. With the support of Mike and many other people of faith, we will fight the good fight, finish the course, and keep the faith.”

The above statements are fact.  There is no denying what was said and the outlook Bickle has.  The real question is, why does it matter? Secondly why is the NJDC making such  a big deal about the viewpoint of Bickle?

The Liberal Jewish establishment in America have for years supplanted traditional Jewish teachings with the philosophy of the modern liberal and social justice movements.  Judaism, being the moral foundation of the Jewish Nation is covenant centered in outlook.  The law was given by the Almighty to be followed and help direct a truly just society.   The Liberal Jewish approach to the world is opposite.  Liberalism has become the foundation for all things, even Judaism.  If a piece of the Law does not fit into a “modern” outlook then it is ejected.  By no means am I implying this is an all or nothing affair, but rather I am attempting to stress that way one views the basis of his or her life outlook essentially becomes pivotal foundation for which they judge morality.

Liberal Jews have taken to picking apart anything connected to conservative principles as archaic and primitive. The weapon of choice is often the anti semitic card.  This has increasingly become more and more maligned by non-partisan observers, but organizations like the NJDC continue to deploy it.  The fact is, many of us Jews on the right in America and in Israel cringe when mostly Democratic Jews who have little or no connection to observancy play the Jewish victim and are “appalled” at the religious viewpoints of devout Christians.

Let’s put it more clearly.  Liberal Jews are liberals. Their religion (not their ethnicity) is liberalism. Any theological convictions are at their core in opposition to liberalism.  This would go equally for any dedicated co-religionist. Being an observant Jew, I have no qualms in my belief set.  I also understand my co-religionists disagree on my eschatological outlook. This is of no surprise since each of us believes our side is right. The question is not how one views the “End of Days,” but rather how an individual acts towards their fellow man up until that point.

From Israel things are Viewed Differently

Israelis do not care if a particular person believes in a different ending to the redemption process. We care about developing our country and want the strongest allies possible. Ultimately our foreign policy is increasingly becoming a neutral one. This means, we have to do what is best for the Jewish Nation.  Since what is important to Israel is Israel, then it is very easy to decide who would be the best President.  All one has to do is look at a candidate’s record. There has been perhaps no greater supporter of Israel and the Jewish people’s rights to all of the Land of Israel in the Senate than Ted Cruz.

“Those who hate Israel hate America,” Cruz told the people attending the event, which he had been invited to address as the dinner’s keynote speaker. “Those who hate Jews hate Christians. If those in this room will not recognize that, then my heart weeps. If you hate the Jewish people you are not reflecting the teachings of Christ. And the very same people who persecute and murder Christians right now, who crucify Christians, who behead children, are the very same people who target Jews for their faith, for the same reason.”

Calling Ted Cruz an Anti-Semite is despicable.  It’s true, he may very well have a Christian eschatological outlook, after all he is a Christian and he is in fact entitled to his religious beliefs. Organizations like NJDC and leading Liberal Jewish politicians would do well to separate Liberalism from their Judaism.  When they do that, they may see the only thing they can accuse Ted Cruz is disliking Liberals. In my book, that is perfectly fine.