“The problem is not how to determine, as you hear in the media, whether you have ‘the right’ to criticize Israel or whether it is possible to be ‘anti-Zionist without being anti-Semitic.’ The truth is that one can now be anti-Semitic only by being anti-Zionist; anti-Zionism is the required path for any anti-Semitism that wishes to expand its recruiting pool beyond those still nostalgic for the discredited brotherhoods.

The question is no longer simply whether the Holocaust deniers are sincere or perverse, ill informed or fully aware of manipulating historical sources: The suggestion of Jewish trafficking in memory; the accusation of inventing, exaggerating, or simply exploiting the hypothetical suffering of one’s own people; the idea that the Jews might be profiteers not of war but of the Holocaust, obsessively cultivating their memories for the sole aim of covering up their own crimes—all of these offer anti-Semitism a new reserve of good conscience and innocence.”

The Genius of Judaism by Bernard-Henri Lévy

Linda Sarsour, organizer of the Women’s March, called Yousef Munayyer’s piece in Time magazine (checked here by HonestReporting for its bias and outright display of dishonesty on the issue) a “thought provoking read.” She has also failed to condemn the dangerous incitement of a fellow anti-Israel activist who is a Hezbollah supporter and supports the total annihilation of the Jewish state.
Through her complicity to the hate and incitement, further sanctioned through silence within her larger social circle, she is succeeding in norming what Lévy calls “the new guise of the oldest form of hate” … 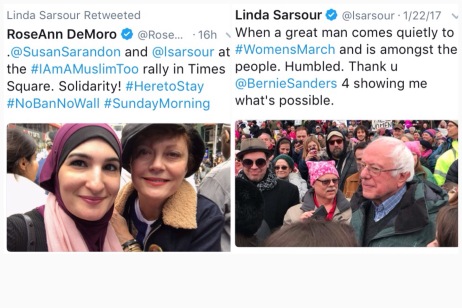 and drawing members of the *progressive* glitterati in Hollywood & D.C. (along with the *go-along-to-get-along* group) to her fan club — and into the atrocious propaganda-spewing machinery with the unconscionable ruse she’s selling.

CAMERA on Campus reports that Sarsour will also be taking part in Jewish Voice for Peace’s Upcoming National Conference in Chicago on March 31 to April 2nd. JVP, as described by CAMERA on Campus is a “misnamed anti-Israel organization” that “plays a significant role in stirring up anti-Israel rhetoric. JVP supports the Boycott, Divestment, and Sanctions (BDS) movement targeting Israel, supports Students for Justice in Palestine events including Israel Apartheid Week, and calls for an end to U.S. military aid to Israel.” The Anti-Defamation League “has asserted that JVP’s role in the anti-Israel boycott, divestment and sanctions (BDS) effort is to provide the movement with a ‘veneer of legitimacy’ and camouflage against identification as antisemitic.” Sarsour will share the anti-Israel spotlight at the JVP conference with speaker Rasmea Odeh, a convicted Palestinian terrorist and “member of the Popular Front for the Liberation of Palestine (PFLP), a U.S.-designated terrorist group.”

Any news outlets that promote Linda Sarsour’s *social justice* agenda and applaud her activism without explicitly acknowledging the dangerous hypocrisy that comes along with these so-called “good deeds” … need to be called out and condemned … in the interest of #honestreporting and for the sake of humanity.