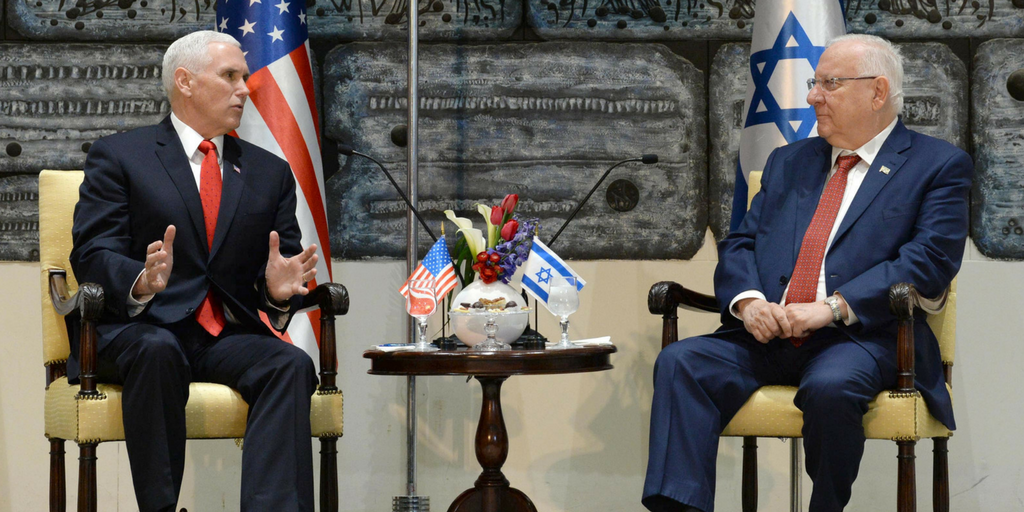 Yesterday concluded Vice President Mike Pence’s first official visit to the Holy Land. After his previous planned Middle East trip was delayed by the all-important Congressional Tax Reform, using his Vice Presidential tie-breaking vote to pass it, he has kept his promise to make an official visit. After two months have passed since President Trump confirmed what the Jewish people have known for over 3,000 years, that Jerusalem is the eternal capital of the State of Israel; now his Vice President has met with Egyptian, Jordanian, and Israeli officials at a vital turning point in the Middle East.

Since the Trump Administration’s announcement, there has been some push back, which was generally accepted to happen. Though, the push-back on recognising Jerusalem as the capital of Israel 20 years ago could have started a major conflict against Israel. Today, we have seen a sharp change in the region, with the Sunni Arab states inching closer to normalisation with Israel, the push-back has only come from the misguided Palestinian Authority.

All of this has lead up to the Vice President’s trip to Israel, a trip that was supposed to include Palestinian Authority leaders, whom has decided to boycott Pence’s visit. Though, Mike Pence visited the holiest site to the Jewish people, the Western Wall, the Vice President was not permitted to travel to Bethlehem, which is under the Palestinian Authority. The Bethlehem boycott was an offense by the Palestinian’s Authority against the United States, while the trip was purely diplomatic, this was heartbreaking to the Vice President, a devout Christian who was eager to his pay respects to Bethlehem’s Christian holy sites. One could see his trip to Bethlehem as a holy pilgrimage as the Muslims see their trip to Mecca as a holy pilgrimage.

Over his trip, Vice President Pence gave his address to the Knesset, Israel’s Parliament in Jerusalem. He spoke on the recognition of Jerusalem, Iran’s destructive actions in the region, the strength of the US-Israel relationship, and on bringing about a final peace agreement between Israel and their Arab neighbors. He also met with Israeli Prime Minister Netanyahu and President Rivlin, another great opportunity for these world leaders to speak on the challenges facing Israel and region. Not to mention the Vice President’s solidification that the United States is keeping their promise to move their embassy to Jerusalem by 2019!

On the Vice President’s scheduled to visit Yad VaShem, Israel’s memorial to the victims of the Holocaust, he was able to pay his respects. A visit that many world leaders make, understanding the lessons of the Holocaust is of global importance. As a proud Jew, I thank the Vice President for taking the time to learn about the atrocities that in the modern era has heavily impacted the decisions of the State of Israel and the Jewish people.

Since President Trump’s historic decision to give full American recognition of Jerusalem as Israel’s eternal capital, there has been tension and much banter between the Trump Administration and the Palestinian Authority. Now the Vice President has finished his first state visit to Israel. As the Israeli people embraced the decision, we welcomed the Vice President with open arms. I praise Vice President Pence on keeping his trip, especially when he has had many opportunities to cancel, mostly due to Congressional votes and backlash from the Palestinian Authority. I hope the Vice President has had an enjoyable and productive trip, I know that there will be another visit here, where he will be able to complete his tour with a trip to Bethlehem and much more of the Land of Israel!

Originally Published in Times of Israel