So Michael Pence has in his name Peni’el, Pen from Pence and Keil from Micha’el, the mighty prince of Israel who informed Avraham and Sarah at this time, next year, you will have a son, a son who will be circumcised on the 8th day. So Ya’akov received the name Yisrael at Alot HaShachar after the all night wrestling match with SamKel (the angel of Edom). There are 72 minutes between Alot HaShachar and sunrise, 70 years of birthpangs + 2 years of Chezkat Mashiach while Mashiach proves himself. So how do we know that we are entering those final two years before sunrise? From the following in Bereishit 32:

כה וַיִּוָּתֵר יַעֲקֹב, לְבַדּוֹ; וַיֵּאָבֵק אִישׁ עִמּוֹ, עַד עֲלוֹת הַשָּׁחַר. 25 And Jacob was left alone; and there wrestled a man with him until the breaking of the day (Alot HaShachar).
כו וַיַּרְא, כִּי לֹא יָכֹל לוֹ, וַיִּגַּע, בְּכַף-יְרֵכוֹ; וַתֵּקַע כַּף-יֶרֶךְ יַעֲקֹב, בְּהֵאָבְקוֹ עִמּוֹ. 26 And when he saw that he prevailed not against him, he touched the hollow of his thigh; and the hollow of Jacob’s thigh was strained (The Holocaust, a very deep wound resulting from a Churban at the end of the dark night just before Alot HaShachar.   Me’am Loez said this sinew corresponds with the negative commandment against Rechilut.  There are 365 sinews in the human body, and there are 365 negative commandments including the mitzvah against Rechilut (talebearing).  In this case the talebearing was the talebearing of  bar Kamtza against Kamtza which destroyed the 2nd Temple.), as he wrestled with him.
כז וַיֹּאמֶר שַׁלְּחֵנִי, כִּי עָלָה הַשָּׁחַר; וַיֹּאמֶר לֹא אֲשַׁלֵּחֲךָ, כִּי אִם-בֵּרַכְתָּנִי. 27 And he said: ‘Let me go, for the dawn breaketh.’ And he said: ‘I will not let thee go, except thou bless me.’
כח וַיֹּאמֶר אֵלָיו, מַה-שְּׁמֶךָ; וַיֹּאמֶר, יַעֲקֹב. 28 And he said unto him: ‘What is thy name?’ And he said: ‘Jacob.’
כט וַיֹּאמֶר, לֹא יַעֲקֹב יֵאָמֵר עוֹד שִׁמְךָ–כִּי, אִם-יִשְׂרָאֵל: כִּי-שָׂרִיתָ עִם-אֱלֹהִים וְעִם-אֲנָשִׁים, וַתּוּכָל. 29 And he said: ‘Thy name shall be called no more Jacob, but Israel; for thou hast striven with God and with men, and hast prevailed.’the founding of the State of Israel at Alot HaShachar in 5708
ל וַיִּשְׁאַל יַעֲקֹב, וַיֹּאמֶר הַגִּידָה-נָּא שְׁמֶךָ, וַיֹּאמֶר, לָמָּה זֶּה תִּשְׁאַל לִשְׁמִי; וַיְבָרֶךְ אֹתוֹ, שָׁם. 30 And Jacob asked him, and said: ‘Tell me, I pray thee, thy name.’ And he said: ‘Wherefore is it that thou dost ask after my name?’ And he, (the angel of Edom) blessed him there.
לא וַיִּקְרָא יַעֲקֹב שֵׁם הַמָּקוֹם, פְּנִיאֵל: כִּי-רָאִיתִי אֱלֹהִים פָּנִים אֶל-פָּנִים, וַתִּנָּצֵל נַפְשִׁי. 31 And Jacob called the name of the place Peniel: ‘for I have seen God face to face, and my life is preserved.’
לב וַיִּזְרַח-לוֹ הַשֶּׁמֶשׁ, כַּאֲשֶׁר עָבַר אֶת-פְּנוּאֵל; וְהוּא צֹלֵעַ, עַל-יְרֵכוֹ. 32 And the sun rose upon him as he passed over Penu’el, and he limped upon his thigh.(72 minutes after Alot HaShachar which is likely 72 years since 5708).

Now I can hear already the shouting and the screaming.  Michael Pence is a Trinitarian.  He is a Xtian who may or may not believe in the mangod as his god or as G-d’s partner in addition to the Creator of the Universe as G-d Himself.  So I simply point out, that it is the angel of Edom who wrestled with Ya’akov, and it is THAT angel who blesses Ya’akov at Alot HaShachar BEFORE the Truth of G-d’s Oneness has become obvious to Mankind.  That only takes place at Sunrise, 72 minutes later.  And wow, did Mike Pence deliver in his speech before the Knesset.  He issued brachot since Rosh Chodesh Shevat that cannot be taken back.  We have no idea if Donald Trump might “change his mind” about Eretz Yisrael because he thinks that he can put into motion the real estate deal of the century and with his chutzpah, might bring world peace.

I realize that Donald Trump according to observations of rational people, is emotionally “unreliable” and that he, like the kings of ancient Persia from whom his soul root seems to come, might change his mind on a whim of intense emotion.  On the other hand, he seems to be doing teshuvah, and the man who ran for President is now more grounded in a complementary set of moral principles than the man who was running for POTUS in 5776.  And by the way, in this sphere of making and implementing stable and consistent policies, Pence is very emotionally stable and emotionally reliable.  And for sure, there was never a question in the General election.

The Suha Arafat hugging Amaleqia whom he ran against in the General election would have been ten thousand times more evil than Trump could have ever hoped to be.  If she, the Hilly in Oholibama, the Hivite snake, had won, we would already hear the roar of international troops intent of making Judea and Samaria and half of Yerushalayim Judenrein in the Jordan Valley sent by UN Sec Council decree, G-d forbid.  So Baruch HaShem, HaShem has been kind, and now that the time to receive Edom’s brachah has arrived, it has arrived in spades.  “And he has recognized us as the same people who received the Torah and settled the land for over 1300 years from 2488 until the destruction of the 2nd Temple in 3830 and the crushing of the bar Kochba Revolt 65 years later in 3895.

They, he and his boss, have recognized our eternal connection to the Holy City where G-d Himself has dwelt in our midst where He Himself has placed His Holy Name.  Even if the former Rav of the British Empire, Yonatan Sacks Shlit”a, wrote half of his speech, Mike Pence sought him out to help him reach a spiritual height in order to dispense a brachah from the mouth of an angel that no change of policy on a whim can possible remove.

If you want to comment on why there is a S sounding ending at the end of V.P. Pence’s last name, by all means let me know.  I have not yet figured that one out.  In light of all this, I would love to link to this beautiful song written and originally performed by Rav Shlomo Carlbach.  It is one of his 600 melodies that he wrote in his lifetime.  During his lifetime, it was not one of his most popular melodies, and it seems to have been given a revival as other artists have sung this song posthumously, including this version by Mordechai ben David.  It is now a mainstay at every Jewish wedding.  Perhaps its latent popularity is because we all know deep down that those 72 years are reaching completion.  I commented on the Youtube page about this video.

Originally Published at Years of Awe

Next Post SPLITTING SYRIA: The Coming Showdown and the New Middle East 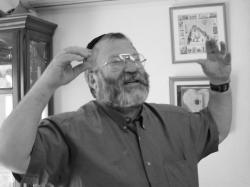