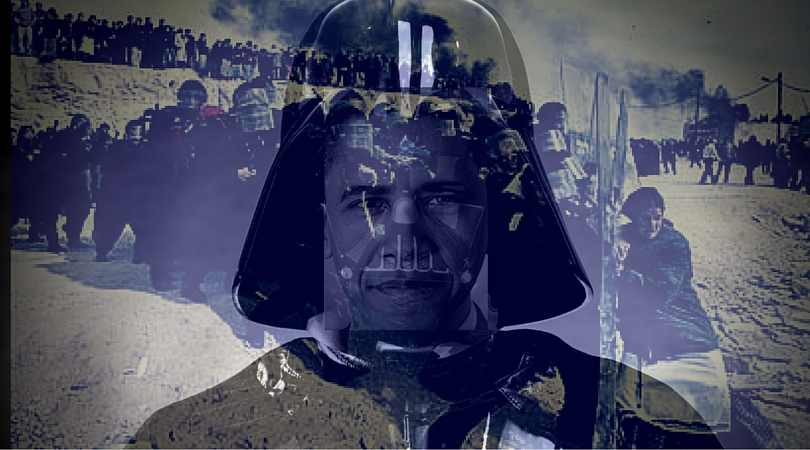 What does one do when the person they have elected views the office they hold as merely a means to gain even more power.  They can either dismiss the chorus of complaints as racist, conspiratorial, or downright mad, but the facts won’t change and the fleeing of self responsibility won’t reverse the course.

When Americans elected Barack Hussein Obama in 2008 and again in 2012, they made a choice between the sovereignty of the many  and sovereignty of the State.  For Obama it has never been about the Change he promised as that was a sugar coated pill for the masses.  The revolution Obama has wrought in the USA is the revolution of the State against its citizens. This is the bureaucratic dictatorship the founding fathers warned against.  It is the unseen hand that controls all, but cannot be found out for it is the state itself and not a single person.

Obama though is not satisfied with his revolution in the United States, because Obama has always aspired to more.  For Obama he is the revolution in and of itself.  For if he can so fundamentally transform America, why not be the great unifier of the world itself. Afterall, for Obama the USA has a flaw.  The Amendments the 13 original states agreed to ratify (after some wrangling between them) are too strong a component to the cultural ethos of the USA to disregard and complete the revolution Obama would like to see.

Breaking Israel News reports that Al –Jarida, an Arabic language Kuwaiti magazine, published an article on Friday claiming that US President Barack Obama has set his sights on becoming the next Secretary General of the United Nations when he leaves the Oval Office in one year.

For Obama the revolution will be complete, the global security state, the one that rights the wrongs of the past, equalizes the rich with the impoverished, and heralds peace at the expense of personal freedom will be his creation. Once again he is both the revolution and its goal.

The Torah teaches us that each individual is a Divine spark, a map of the universe in miniature.  We are in this world for a specific purpose only we can fulfill. It is true, the Kingdom Israel that is waiting to burst through the darkness will have a King, but the King and the Kingdom are not meant to rule over us.  They are meant as a means to give full freedom to the individual and at the same time provide the inspiration and motivation for each of us to attain our Divine goals.

Statists believe the State is the all powerful and it is the individual’s purpose and goal to pledge loyalty to the State. That allegiance and handing over of personal freedoms is the catalyst for global and societal transformation.

The coming conflagration is not really about Islam versus the West.  Rather, it is about the role of the individual in relation to the State.  Slavery comes in many ways.  Sometimes it is a Pharaoh and his task masters who rule relentlessly over a powerless Israelite people.  Other times it is the quiet rule of law administered, not for the sake of justice, but rather to uphold the power of the few and the system that serves them over the masses who have traded away their freedom for the short term injection of false happiness.

These are the times our sages spoke about.  Those of us who are G-d fearing must not give in to the false promises of politicians or the machinations of soon to be ex-Presidents who believe they are the Change everyone wants and needs. We in Israel and those of our supporters around the world who believe in the individual rights and freedom of thought must yearn and be prepared to defend the freedom of man and his divine mission against the totalitarianism of the State.

This war has no specific location, but rather it is a war over the hearts and minds of humanity itself.