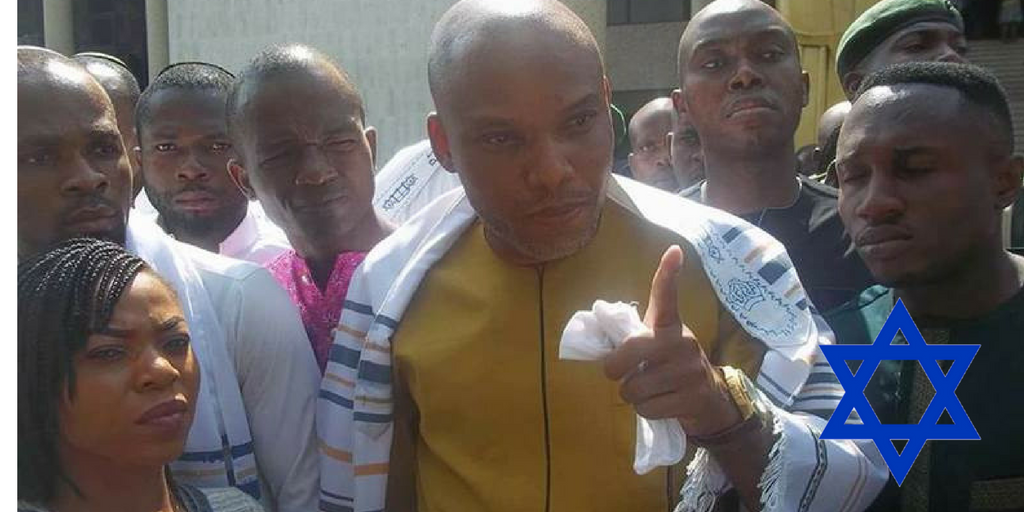 Nnmadi Kanu, leader of IPOB who has been imprisoned by Buhari’s Islamist regime in Nigeria has threatened that he would expose secrets that are capable of sinking Nigeria. Kanu is not your ordinary prisoner, he is a man on a mission and he is winning.

What most observers thought would be a show trial has changed the course of Nigeria and possibly the world. Kanu’s reputation as a political and spiritual force has only grown since his imprisonment.  It has become clear that he is no ordinary leader.

Since the Nigerian military defeted a fledgling Biafra in the war between 1967 and 1970, Biafra’s independence was put on the back burner of world consciousness. In recent years the Biafrans, most notably the Igbo have reconnected to their Hebraic traditions in a near miraculous way.

Thousands of Igbo have turned to their ancient customs deeply connected to Jewish rituals to find a source of strength. These Hebraic roots stem from the Igbo’s origins to the northeast and ultimately to the Land of Israel.

Those who know Kanu can say that he has increasingly shifted towards a direct Israelite understanding of the world and has grown closer to a Judaic outlook.  This makes him the most dangerous man in Nigeria, because for Kanu it is about returning the Igbo and all of Biafra back to its original state of being.

When the British came to West Africa they understood they were dealing with a Hebrew tribe.  They encouraged the Hausa to defeat the Igbo and hand them over as slaves to be brought to the New World. Due to ensalvement, oppression, and occupation by the British, Biafra and the Igbo would lose their connection to Israelite customs.

However, with Buhari’s oppression of Biafra and the Igbo growing, Kanu’s return to his Israelite ancestry through a Jewish frame of reference is part of a larger movement back to the truth. The Hebew movement in Biafra can be seen everywhere  From Zionist groups to prayer shawls.  Thousands of Igbo are awakening to the fact that they are descendents of Israelites that traversed sub-saharan Africa over a thousand years ago or more.

In order for their to be a free Biafra it must shed the religion of their colonizers and return completely to their roots. Kanu’s direction can lead to an independent state of Biafra, the first Hebrew state in Africa.