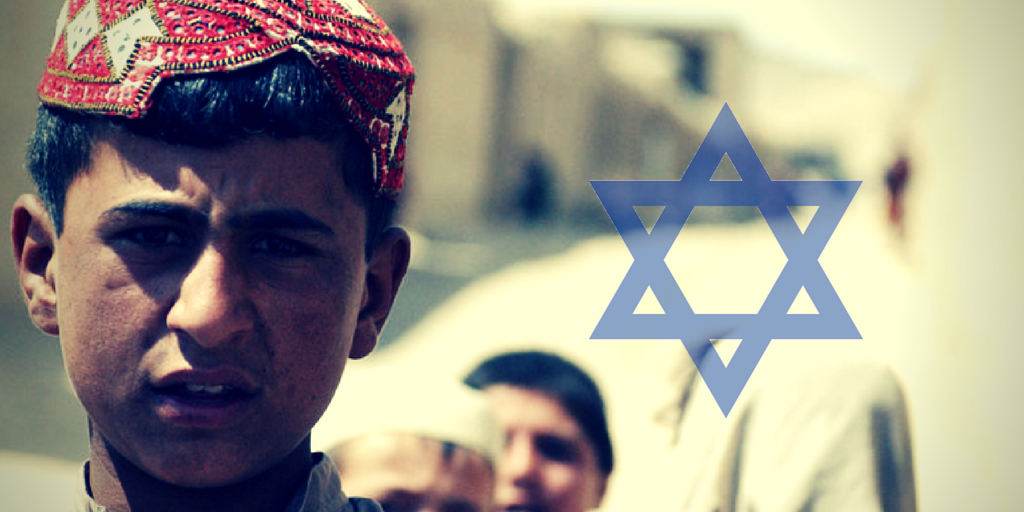 As many of our readers know Israel Rising has always been at the cutting edge of social currents and events as they relate to Israel’s unfolding redemption.  In recent years this has taken me and this site into the subject matter known collectively as the Lost Tribes of Israel.  I for one have always been interested in dicovering exactly who and where our lost brothers are and so as time as gone I have also dicovered that others too have had the same drive and desire as myself. While there are many groups around the world with some parallel customs to Israel, two groups of people in very opposite locations share a great deal of Israelite customs.  These would be the Igbo of southern Nigeria and the Pashtun of Afghanistan/Pakistan.

I recently had the opportunity to ask Nadav Sofy, the founder of  The Association for the Bani Israel from Afghanistan a number of questions concerning his views on the Pashtun of Afghanistan and why he believes they form the central population center of the Lost Tribes of Israel.

DM: When and how did you become interested in the connection between the Pashtun and Israel?

NS:  About 3 years ago my wife got me interested in lost Jewish communities. From that topic we naturally moved to read about the lost tribes who’ve been lost to the Jews for about 2600 years. When we read about the Pashtuns we were amazed how so much strong evidence is going for them, yet their story being Israelites is completely unknown to the majority of the Israeli public. So I started looking for ways to talk to them on the web… At first I ran into Pakistanis with great resentment at me, being from Israel. Later I found out that most of that Pakistani resentment doesn’t come from the Pashtuns of Pakistan, but actually from other ethnicity in Pakistan, who, believe it or not, sometimes even pretend to be Pashtuns and curse Jews to scare them off from getting involved with Pashtuns. I learned that when I met such people who claimed to be Pashtuns, but could not answer a simple question in Pashto. Luckily I didn’t give up and finally met Pashtuns both from Afghanistan and Pakistan. I haven’t stopped since.

DM: What is your logic behind your belief they are in fact the lost tribes?

NS: The logic is simple. First, the lost tribes, and even Jews in general, were and still are spread across different areas. During the first exile of the Jews, the diaspora centers were Babylon and Persia, but during the second exile, the Jews did not have a center. For the ten tribes the situation is expected to be like for the Jews in their first exile – the Ten Tribes might be found in multiple places, but according to the Bible, we expect to find their diaspora center somewhere in central Asia. We now know exactly which nations live there, and the Pashtuns are not only the best match, but actually the ONLY match in terms of having an ancient tradition that they are Israelites, having more than 40 Jewish customs, and being in the correct location according to the Bible. If it isn’t them, it is no one, and even objectively they fit even better than expect. The Pashtuns are surely the lost tribes, and even if some portions of the lost tribes went elsewhere too, certainly Afghanistan is the diaspora center of their exile.

DM: Can you share some examples of parallel customs?

NS: Of course. One example what be Netilat Yadayim, which basically mean washing hands before eating meals specifically with a tool. Some even pour water 3 times on each hand, just like King Solomon commanded us. Some Pashtuns never count their children or other Pashtuns, and I was even told that one of the reasons no one knows how many Pashtuns live in the Federally Administrated Tribe Area is because whenever there is a census, the Pashtuns give false information because they don’t count people. They keep Kosher, I think more than any Jew might have ever expected from the lost tribes, including not eating meat and dairy products together and even don’t use the same dishes, they don’t marry outside the Pashtun people, they cover blood of slaughter animals, and some even don’t sleep in the same bed during woman’s period. They have more than 40 such customs which is completely amazing after so many years.

DM: What do we do about their devout belief in Islam?

NS: Well, did any of us expect to find the ten tribes Jewish? I didn’t. We as Jews know that according to the Halakha, Israelism runs in the blood. You can join us, but you can’t leave us, so an Israelite who changed religion does not and can never ever stop being an Israelite. They are children of Yaaqov, our brothers and sisters, even though we don’t agree over which commandments G-D wants us to follow. Until now, with the exception of some religious extremists, we receive great love from them, and we give them a lot of love back. In the end, blood and nationalism is the strongest bond between people.

DM: How can Israel help them given the fact that Afghanistan does not have diplomatic relations with Israel?

NS: Unfortunately, Afghanistan’s government tries to be more Arabic than Arabs, when even the Arabic Jordan and Egypt, who tried to destroy Israel multiple times, have diplomatic relations with Israel. We are told that this is because of pressure from Iran, but anyway, it certainly makes our life harder and we hope it will change soon. For now, Israel can make a move to finally reunion with the other tribes, by letting Afghans visit or by approaching Pashtuns organizations in Europe and the US. Israel can also let Afghans come as foreign exchange students, and those are just some minor examples of things Israel can do easily, practically without even spending a lot of money. There are also ways in which Afghans can help Israel, so it doesn’t have to be a one sided thing. Right now one of our hopes is that some people in our govenment will wake up, and it must be soon. Our state of Israel was not called Israel for nothing. When we came back from the first exile, we called our kingdom Yehuda. So why are we now  called Israel? Any child knew back then, from the Bible, that we will be destroyed before we reunite with the other tribes, and any child knows today that we will never be destroyed again and that we will, without any doubt, be reunitd with the tribes. So we are called Israel, not Yehuda, a state for the whole nation of Israel which includes the other tribes too. I should say that right now we don’t have any governmental support, we are an NGO of Jews who believe the Pashtuns are the Bani Israel and thus integral part of our nation.

DM: The British intentionally put the Durand Line through the middle of Pashtun territory i an attempt to break their cultural cohesiveness. This is a pattern that was replicated across much of the British colonies. The powers at be are far stronger than Israel.  How can Israel help and reverse the demonization of the Pashtun the West has created without causing a major rift?

NS: Well the Durand just might be the biggest issue in Pashtuns’ politics. To understand the complexity of the situation you have to see the discussion. What we see on a daily basis is nationlistic Pashtuns being murdered, which makes them afraid to speak up. Then the non nationalistic Pashtuns, who either see themselves as Pakistanis or nation-less Muslims, meet the Afghans on the web and start cursing them. The Afghans don’t alway differenciate and sometimes just curse back at any Pakistani Pashtun, even if he is actually nationalistic. Meanwhile, Pashtuns are literally blown up by suicide bombers who “strangely”only attack Pashtuns, and then the same Pashtuns are targeted and punished for the suicide bombings that were directed at them! So at the diplomatic level, and at the morale and world-view level, Israel can certainly help. The divide and conquere of the British and the forces that followed Britain really made the Pashtuns divided. If the Pashtuns from both sides will unite with us at least spiritually, by that, hopefully they will also unite between themselves. Pashtuns on both sides heard from their parents they are Bani Israel, and this is the banner we can all carry, to finally stop the evil Pashtun genocide that has been happening for decades. Some Pashtuns are scared of openly saying they are Bani Israel, because some countries would not like that, but those same countries are the ones who are sending their Taliban pigs at the Pashtuns, so I always tell them that I don’t think it can get too much worse than it already is. At least there will finally be a way out, a light in the end of this endless war.

DM: Tell us a bit about your organization’s activities and what’s next after your successful conference last week.

NS: We can’t know exactly which opportunities will be opened in the future, as this is the first time on earth that two parts of the same nation try to become one nation again, and it gets even more complex because we don’t agree on religion and we are not closed geographically. But right now, our job is possible. The first and most important thing to do right now is to make all the Jews know that the other tribes are found, and to make all the Pashtun realize how much we care, so finally we could stop seeing comments like “so what, we are Muslims now”, because they are Muslim not just now, but for a long time, and we still care. We wanna do a Pasho-Hebrew duet that will rock the Pashtun and Jewish world, we wanna write a book with the sources of the Pashtuns’ Jewish customs, we wanna do a serie of Pashto lectures, and English ones, to draw everyone’s attention, and in the end, when the awareness will be high enough, we hope that Afghanistan and Israel will be friends, and tons of opportunities will immediately become available. I must say that with Pakistan things are different. I think no one expects Pakistan to have diplomatic relations with Israel, because their ruling people are not Pashtuns and think they are the worst enemy of the Jews, even though we never even heard about them.

DM: This will be my last question. Why are you called the association for the Bani Israel from Afghanistan when there are millions of Pashtuns in Pakistan?

NS: Pakistan was created 70 years ago. Thus all the Pashtuns are Afghans and are from Afghanistan.

DM: Thanks Nadav for taking the time.  I know you are very busy.

NS: Anytime.  It is a pleasure spreading the truth about our brothers and sisters in Afghanistan and I am excited to be involved in such an amazing movement.