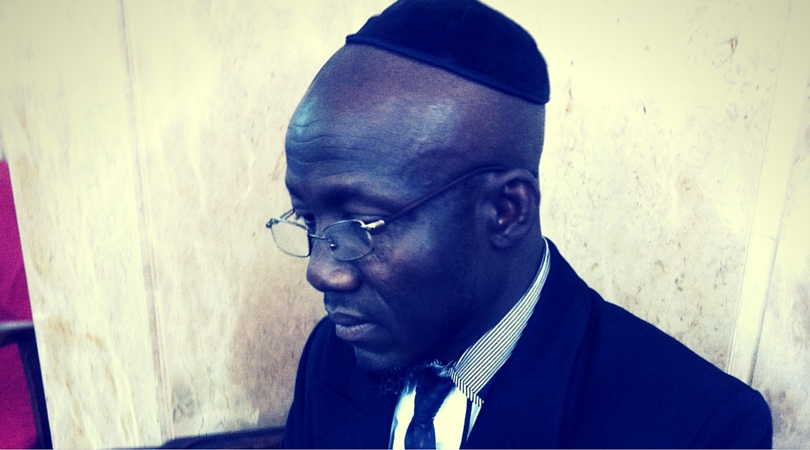 It is not often when you get to sit with a truly special person.  I first met Chief Rabbi Hiben Daniel on my way to the Kotel last year.  He informed me that he was the head of the Igbo in both Israel and Nigeria. At that time I was more interested in business relationships with pro Israel Africans than taking up the cause of the Igbo, but the Almighty tends to push one where he or she is needed.

The Igbo are bit of an enigma to most Jews, but more and more there is a recognition that at some point in history they were in the Land of Israel.  There are a few hypotheses on how they got to what is called Biafra, the southeastern area of Nigeria.  Some believe they are the descendants of Judeans that fled to Egypt with the prophet Yirmiyahu. Others say they are Gad and came well before.  Of course no one should discount the fact that the Mali empire was filled with Jews and upon its collapse many fled south to the Guinea coast, Biafra being the furthest east.

The Igbo are circumcised on the eighth day as commanded in the Torah.  They do not eat unclean animals or mix meat and milk.  Furthermore they are married under a chupa, a Jewish wedding canopy. There are many other correlations.

So what happened?  Essentially, the British imposed Christianity on the southern areas of Nigeria. The Yoruba, mainly in the western part of Nigeria became Christian fairly easily, but the Igbo strangely enough blended both identities together. Only now, with the return of Israel to its homeland, the Igbo are waking up and realizing that they must return to their roots.  There are still millions of Igbo practicing Christianity with a twist in worshiping on Shabbat, but this is do to forced missionizing by Europeans.  When shown the truth, many begin to drop the ways of the original colonists.

Now, over a year after our first meeting Rav Hiben Daniel and I were able to discuss himself and the Igbo.

Hi, Rav Daniel.  Thank you for sitting with me to discuss some of these issues.  I know much if this information is not widely distributed to the broader Jewish world. So it is an honor to discuss these things with you.

When did you arrive in Israel?

How did you grow up?  What Jewish customs do you recall?

I grew up with my parents who were hiding to reveal to us that we are Jews for fear that we might leave them for Israel. I recall that we, good or bad must circumcise every male issue on the 8th day. The only time it’s extended is when the child is sick. Again, my father may he rest in peace had to wash his hands and pray every morning before talking to us.

Do you believe Igbos are Jewish? Do they have to convert?

Yes Igbos are Jews. I don’t believe we have to convert but who am I to challenge HaMaran Ovadia zatzal, who told me why it’s good. So I started before others. According to the Ashkenazi rabbis like Rav Yehuda Frank  we don’t have to., although he recommended to go to a mikveh.

How did the Igbo get to Nigeria?  Why is there no written Torah?

The Igbos got to Nigeria through Egypt and some came and later left again, though few remained.

King Solomon who saw his minister Yerovam as a threat didn’t allow them come back from Egypt and the Kingdom divided.

The group who continued with Moshe May his name be blessed, came through Beersheva after helping to conquer Jordan.

Many from the tribe of Gad did not enter and scattered before coming to Land and went to Africa.

There was no Torah with them, rather Tanach. This same reason lead to their formation of the 4 market days called Nkwo, Eke, Orie, Afor which was a generally accepted tradition until they had Torah and those who didn’t have continued till today. Everything was primitive of course.

Have you experienced racism here in Israel?  If so, please elaborate and explain what we can do about it?

Racism? In black and white. Mostly from those who are not religious. To curb it, the government has to accept all Jews with open arms. Government offices and Knesset members should comprise black and white.

A committee, I mean trusted ones should be set up by Prime Minister Netanyahu to investigate this issue and enforce a law on this. You heard about the Ethiopians; how they were removed from school because they are black? How they never allowed them to buy houses to places of their choice? How my brothers and sisters after the conversion approved by Maran Ovadia (may he rest in peace) in 2007 were deported? The judges arrested together with me and the rabbis that were teaching us? It was on news on all media. Did the government do anything? Are there no Israelis in Igboland? Lots of them practicing with the Igbo Jews, yet we are tortured in our own land [Israel].

One last question.  What do you envision as your role here in Israel and in connection to the Igbo in Nigeria?  Where do you want to take it?

My vision, and role here in Israel? You can see for yourself. I left everything, went to Yeshiva and carefully studied for almost 12 years in different places just to help my poor Jews who are eager to come back to our old tradition of Judaism.

It is my dream to have a Yeshiva there in [Nigeria/Biafra]. I believe that the G-d of my fathers is Omnipresent. Rabbenu Nachman is one of the big scholars and was buried abroad. There is a reason for that. All we should know is that kindness is a language, which the deaf can hear and the blind can see. Judaism without chesed is avoda zara [idol worship]. I wish you well.

Today I am blessed with a wife, Ariella Nkechi Daniel and my princess daughter, Bat-El Adaeze Chinaecherem Daniel. This is my 3rd marriage. The first two was destroyed by the interior ministry ( I know the culprits ) whose main aim was to frustrate me being the leader of my people.

Now my questions to the Israeli government:

We are not fighting for aliyah, money, house ,etc. I beg with tears that the chief rabbi recognize us, help us with sifrei Torah and more Halachaic books and finally send us a beit din to go cleanse my people from their tuma [impurity] by ritual immersion and acceptance of the yoke of heaven, not teudat zeut. To this there will be a complete peace in the land of Israel. If you are current, you can see that a king from the Jewish land of Africa has emerged. This is not by accident, there is a reason for this. Those who communicate well with the King of Kings may know why. Remain blessed.