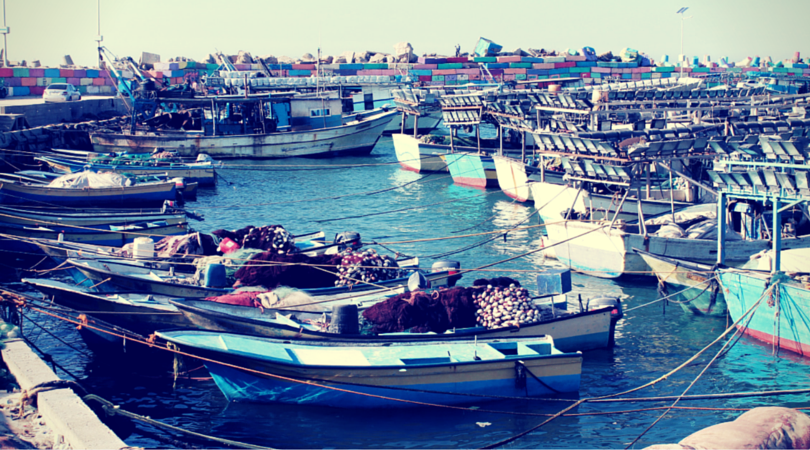 Hamas are not burrowing tunnels because Gaza has no port. They are burrowing them despite the fact it does not have one.

(Originally published on Times of Israel)

Only two things are infinite, the universe and human stupidity, and I’m not sure about the former.  — attributed to Albert Einstein

Just when you thought that you could not possibly hear anything more preposterous on how to help resolve the conflict with the Palestinian-Arabs, somehow someone always manages to prove you wrong — and comes out with a policy proposal so glaringly absurd that it transcends what you mistakenly believed was the pinnacle of imbecility.

Disturbingly, precisely such a hopelessly harebrained scheme is now being repeatedly bandied about by Israelis in positions of influence.

This is the idea of providing Gaza with what, in effect, will be a detachable civilian port under Israeli supervision , built on an off-shore artificial island, connected to the mainland by a bridge more than 4 kilometers long, which can, according to its proponents, easily be disconnected should the Gazans “misbehave”.

Actually, this nonsensical notion has been around for quite some time. Indeed as early as 2011 the British daily, The Guardian, reported that Yisrael Katz, Israel’s minister for transport, was pursuing the idea, which he estimated would cost $10 billion and take about a decade to complete.

Lately, however, it has been raised with increasing frequency in the media, and publicly endorsed by both government ministers and senior IDF brass.

Just prior to that, Haaretz (February 24) reported that “Senior Israel Defense Forces officers are in favor in principle of a port for the Gaza Strip”, and just last week the Jerusalem Post (May 21) wrote: “High up within the defense establishment, some believe that the time has come for Israel to set up a civilian seaport for the Gaza Strip”.

Indeed, at a conference held this weekend in New York, Yisrael Katz, who now, in addition to his former transport portfolio, holds the newly created post of intelligence minister, reiterated his previous support for the construction of a port of Gaza on an artificial off-shore island,: “The off-shore project could provide Gaza with an economic and humanitarian gateway to the world without endangering Israeli security.”

This, of course, is demonstrably detached from reality — but more on that a little later.

I confess that the first time I heard of this appallingly absurd idea was in a private conversation several months ago with someone (whom I shall leave nameless) recently designated as a serious contender for the position of head of the Mossad, to replace previous director, Tamir Pardo.

I remember at the time being taken aback by an idea, so clearly ill-conceived and  ill-fated, being promoted by someone so senior — but took (false) comfort in the belief that it was so wildly outlandish that it would never be given serious consideration by those in authority.

As it turns out, I was sadly mistaken — as this perilous proposal continues to enjoy sustained attention in the discourse.

Perhaps most disturbing are the reports of the support the idea received from senior IDF officers – both past and present — and the rationale that this support appears based on.  For typically, it has nothing to do with any military considerations or operational advantage Israel might gain from the provision of such port facilities to the terrorist-controlled enclave — but rather on a (highly questionable) assessment of socio-economic trends in Gaza, the ramifications this may have for the Gazan public, and how a port might allegedly address it.

Thus, one well-informed correspondent on military affairs describes reasons that underpin that “rationale” for want of a better word: “Hamas, the argument goes, would be hard pressed to careen down the slope of a new war with Israel, even if it wanted to, if the Gazan economy were to begin to take off, enjoying imports and exports, allowing for jobs and income, and giving the civilian population something to lose. While there is no doubt that Hamas is responsible for Gaza’s dire economic state by insisting on jihad with Israel rather than investing in its people’s welfare, Israeli defense officials still feel that they can and should assist the Gazan people attain a better life.”

While some may find this professed concern for the welfare of enemy civilians both noble and a reflection of “enlightened self-interest,” in truth it portends ominous outcomes for Israel and Israelis.

For it is a position that is so diametrically at odds with past experience, and flies so directly in the face of the facts of recent decades that it is difficult to know what is more disturbing: Whether the supporters of the proposal really believe what they are saying; or whether they are saying it despite the fact that they don’t.

Reinforcing the rationale for terror

Of no less concern is that this position echoes the sentiments expressed by both Ministers Katz and Galant  that “The biggest danger to Israel is a humanitarian crisis in Gaza…If Gaza had the ability to bring ships, and goods, without posing a security problem, that is in everybody’s interest.”

For it is a message that strongly reinforces the rationale justifying terror, implying that it is largely economic privation that is the primary cause of the Judeocidal terror emanating from Gaza, and if the residents of that ill-fated strip were afforded greater prosperity, this would operate to stifle the motivation to perpetrate acts of terror.

This is a thesis that is wrong on virtually every level. Firstly, it is risible to believe that Hamas, that has deliberately put its own civilians in harm’s way, gives a hoot about their economic well-being. After all, if it has scant regard for their lives, why should their livelihood be of greater concern?

Indeed, it is far more likely that if the general economic situation were to improve, Hamas would coercively appropriate much of this new found wealth for its own belligerent needs — with prosperity thus making it more potent — not more pacific.

Perversely, perhaps a more effective, but heretically politically-incorrect, suggestion for removing Hamas would be to allow socioeconomic conditions to deteriorate so drastically that the general populace would rise up against it, depose it and ensconce a hopefully more amenable regime, with greater sensitivity for its needs.

To suggest that by alleviating economic hardship, Israel could alleviate terror is, in effect, not only inverting the causal relationship between the two, but it also implies that the victim of terror is to blame for his attackers’ aggression against him. Little could be more counterproductive — and misleading for Israel.

Port no panacea for poverty

Of course, as I have demonstrated at length elsewhere, the allegedly dire situation in Gaza is not the cause of the terror that emanates from it. It is the consequence of that terror. The onerous measures that Israel is compelled to undertake to ensure the safety of its citizens is not the reason for, but the result of that terror. If the latter were eliminated, there would be no need for the former — and far more rational solutions than a multi-billion dollar artificial island could be found to facilitate the flow of goods and people to and from Gaza.

Indeed, no great analytical acumen should be required to swiftly bring us to the conclusion that a port in Gaza will never be a panacea for the poverty of the population.

Hamas, and its other terrorist cohorts, are not burrowing tunnels because Gaza has no port. They are burrowing them despite the fact it does not have one.

After all, Gaza does have a modern port, under Israeli supervision, at its disposal barely 35 km. north of it, in Ashdod.

Under conditions of peace (or even credible non-belligerency), Ashdod can supply all Gaza’s supervised civilian needs, without squandering billions on a fanciful floating island port.

However, under conditions of on-going belligerency, even under the strictest Israeli supervision, there is no way — short of taking control of Gaza—to ensure that dual purpose material such as cement, fertilizer and steel will not be used for belligerent objectives

The intensity of this problem — and the futility of a Gaza port as a means of solving ,or even alleviating it, was vividly highlighted  by a recent report in the International Business Times (May 26).

It cited the director-general of Israel’s Foreign Ministry, Dr. Dore Gold, who speaking at the UN World Humanitarian Summit in Istanbul, revealed that Hamas has been siphoning off 95% of the cement transferred into the Gaza Strip intended to rebuild homes, so that it can use it for military purposes and tunnel construction. Gold told the conference: “From our own investigations we found that out of every 100 sacks of cement that come into the Gaza strip … only five or six are transferred to civilians.”

So, even if the island port were under tight inspection, how could Israel ensure that the building materials that went to construct the recently discovered tunnels would be used for more benign purposes? How could it ensure that steel was not being used to fabricate missiles and the means to launch them? Or fertilizers being diverted for the manufacture of explosives?

Moreover, one might also ask how, as opposed to the case of Ashdod port,  is Israeli supervision to be maintained, and the safety of the Israeli personnel be ensured in the isolated off-shore port, should they–as is far from implausible–be set upon by a bloodthirsty local mob?

The grave economic situation that plagues Gaza will not be alleviated by giving Gaza access to port facilities, which it, in principle, already has available to it.

As noted earlier, Israeli restrictions on the flow of goods are not the cause of Arab enmity, but the consequence thereof. The crippling unemployment, reportedly above 40%, will not be alleviated by transferring Israeli supervision from Ashdod and the Gaza border crossings to an off-shore islet.

There is soaring unemployment because any creative energies that might exist, are not channeled by those who rule Gaza toward productive/constructive goals, but into fomenting violence against the hated “Zionist entity.” A port will not change those realities.

Indeed, it is likely to exacerbate them.

The penury of the enclave is not due to lack of resources, but to the preferences and priorities of the brigands who govern it, and as events have shown, the only way Israel can determine who governs Gaza — and who does not — is by governing it itself.

Katz, Galant and IDF senior brass are , of course, right that Israel should defuse the brewing humanitarian crisis in Gaza — which is demonstrably the consequence of the ill-conceived two-state approach and misguided attempts to foist statehood on the Palestinian-Arabs.

But it is a humanitarian crisis that requires a genuine humanitarian solution: Generously funded humanitarian relocation of the non-belligerent Arab population elsewhere, out of harm’s way, and extension of Israeli sovereignty over the region.

“Perhaps now would be a good time…”

Indeed, there is no other approach –whether with a port or without it — that can:

• Provide a durable solution to the problem of Gaza;

• Eliminate the threat to Israel continually issuing from Gaza; and

• Preclude the need for Israel to “rule over another people.”

Indeed, as one appraisal of the port proposal in the Jewish Press (March 24)  concluded its critique “Perhaps now would be a good time to put into action one of those programs that advocate paying local Arabs to [e]migrate to better places..”

Indeed, perhaps it is.