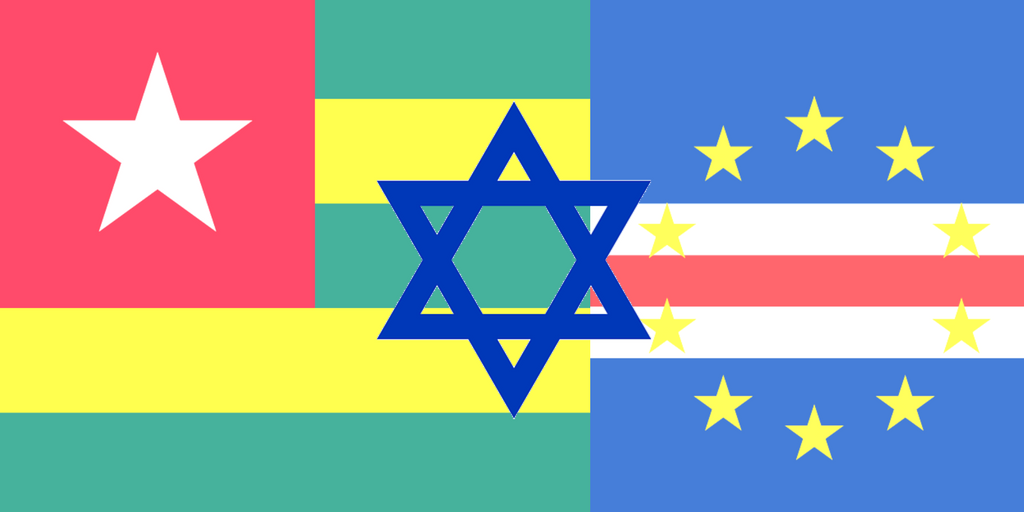 Cape Verde, an island nation of half a million people off the coast of Western Africa who has traditionally voted against Israel at the UN announced a few days ago that they were “no longer going to vote against Israel at the UN.” Coupled with this, they announced separately that Jewish cemeteries and synagogues in the country would be considered national heritage sites and protected against any changes.

The intiative to push the Jewish aspect of Cape Verde’s history was spearheaded by the Cape Verde Jewish Heritage Project (CVJHP). The CVJHP  has been active since 2008 and together with donations from the King of Morocco, has identified and helped restore and protect Jewish sites throughout Cape Verde.

Cape Verde was the destination for thousands of hidden Jews, fleeing persecution in Portugal in the 1500’s. Many of the citizens of Cape Verde are actually aware of their hidden ancestry. Later the Jewish population increased due to immigration by Jews from Morocco and Gibraltar.

Cape Verde’s switch from antagonistic to Israel is part of a process that has seen many sub-Sahara African countries open their doors to Israel.  This movement has increased growth between the African continent and Israel in many sectors such as agritech, medtech, security, and more.

Last night’s visit and dinner hosted at the Prime Minister’s residence between the Togalese President and the Netanyahu’s is an example of the growing closeness between the Jewish State and Africa.

Togolese President Faure Gnassingbe, wrote in the guestbook:  “I dream of Israel’s return to Africa and Africa’s return to Israel.”

This return has been a product of not only politics, but an awareness that both the Jewish people and many countries in Africa have much in common.

I wrote the following last year:

The war against Judah morphed into a religious struggle as the Roman Empire adopted Christianity, a small Jewish sect and warped it, cutting it off from its root. The Jewish exile swung into full force and oppression as the Jews that had now been scattered became second class citizens under both Christian Europe and the Islamic Middle East.

Within a short time these two colonial forces borrowing religious motifs from the crushed Judean culture undertook a continuance of their expansion past Israel into the heartland of Africa itself. It is not surprising that expulsions and forced slavery ensued over the centuries in Africa much the same way it began in Israel since the latter was seemingly an extension of the former.

The clear connection between Israel’s suffering and African suffering at the hands of European Christians and Arab Muslims is made that much more powerful by the fact that Israel is actually part of the African continent.  The African plate’s Northernmost part ends in Northern Israel and runs along the Jordan River to the South.  Looking at Israel in this light makes the Judean expulsion the beginning of Africa’s colonial period.

The shift in mindset across Africa  towards Israel is a realization that the colonialism forced on the African continent was designed to not only exploit the natural resources of the colony, but to essentially subvert the indigenous culture that had grown within the continent itself.   Israel had not only suffered from the same sort of persecution, but remained away from the exploitation itself.

Israel’s return to Africa and many Africa’s embrace of Israel is the beginning of a rectification process that can and will reverse the millenia of colonization, exploitation, and neo-colonialism that has been carried out both in Africa and throughout the Middle East as well as the Indian sub-continent by Western imperialists and radical islamists.