King David wrote in the Book of Psalms, “Sur meRa v’ase tov” – which means, “Veer from evil and do good” (Psalms 34:15).
This is an axiom whose purpose is to enable a framework of orderly life. That is, first prevent actions which are latently bad, and not only have no positive  benefit to any and all, but are negative and harmful.
Only after the deletion of wickedness can good prevail.
If and when this maxim is ignored, chaos reigns.
This pandemonium can be easily witnessed throughout the world today, including here in Israel.
Months ago, following an attempted stabbing of soldiers in Hebron, a number of residents conducted a lengthy discussion with the commander, (a full colonel) of the Judean Brigade (who fortunately is concluding his term, and will soon be replaced.) The gist of the conversation can be summed up in a few words. In his opinion, if he allowed the Arab residents to continue their normal way of life, they would leave us alone. 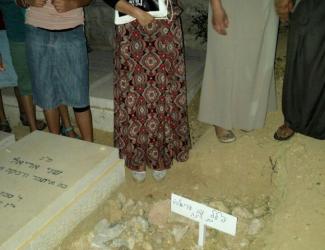 (Photo: Funeral at Hebron’s ancient Jewish cemetery. Credit: Yishai Fleisher)
We tried to explain/convince him that this approach was mistaken and would only lead to further terror attacks.
We were unsuccessful in our efforts. Only after the murder of Genadi Kaufman in Hebron, and the near killing of a soldier outside Beit Hadassah did he change his policies.
Our Colonel/Commander’s outlook is not his alone. Other high-ranking officers, including some of his commanders are of the same opinion.
The results are chaos, such as the indescribable slaughter of a 13 year old girl in her bed in Kiryat Arba this morning.
This isn’t the first time. The Litman father and son, Dafna Meir, the Fogel family, etc. etc.
This is chaos. Because it is the responsibility of the government, the Prime Minister, the Defense Minister, and all the relevant security forces to prevent such atrocities and maintain order.
The problem is that they are shirking their responsibilities and the results are slaughtered Jews. Cut to pieces, as was Hallel Yaffa Ariel, sleeping in her bed, this morning.
What can the Israeli government do to actualize the above-quoted verse? 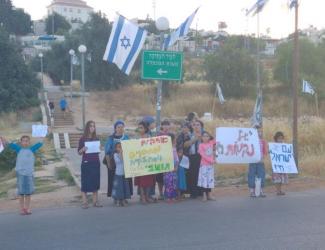 (Photo: Signs outside Kiryat Arba read “Am Yisrael Chai”. Credit: Yishai Fleisher)
First, destroy the wicked. In one word, deterrence.  Ensure that evil suffers.
For instance, presently the Prime Minister glories in the aura of destroying a terrorist’s home (when the Supreme Court allows it.) However, as the terror continues, it is obvious that this measure in not effective. If though, the entire neighborhood where the terrorist lived was razed to the ground, with it inhabitants being expelled to Lebanon, Gaza, (Iraq or Syria), perhaps this might enhance the deterrent effect. (This, as opposed to paying Turkey twenty million dollars in damages to terrorists attempting to kill Israeli soldiers.)
If members of a community knew that immediately following a terror attack they would all suffer, it’s possible that they would take steps to prevent such attacks.
If this isn’t enough, than destroy the entire village or town.
One need not be a genius or expert military strategist to comprehend the logic. In my opinion, this would be somewhat more effective than today’s decision to surround the village of Boni Nayim, where the terrorist lived, and revoke work permits from the killer’s family.
Nu, big deal! So what!? Deterrence? No way. These measures will not prevent the next carving up of another Jew somewhere in Israel.
Real deterrence is the name of the game, the first step in fulfilling King David’s instructions to his People, 3,000 years ago. If they’re not afraid of you, they will continue down their murderous path of atrocity. 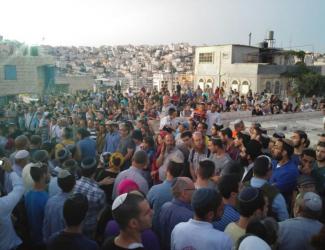 (Photo: Hundreds attend funeral. Credit: Yishai Fleisher)
Stage two – ‘do good.’
This can also be accomplished relatively easily. Our enemies understand two basic languages. The first as now described. The second language they understand is land.
Many years ago, when previous governments were less fearful of the US, the UN and the EU, they implemented the ‘true Zionist response’ to terror. Wherever an attack occurred, there was built a new community.
That policy has fizzled up and disappeared. It must be renewed.
The government must immediately announce and implement construction of thousands of new buildings throughout Judea and Samaria, including such ‘hotspots’ as Hebron. New communities must be initiated.
This is ‘doing good.’ And our neighbors as well as the rest of world, still trying to push a suicide piece plan down our throats, will know we mean business. Maybe they’ll even learn something from us about fighting terror. 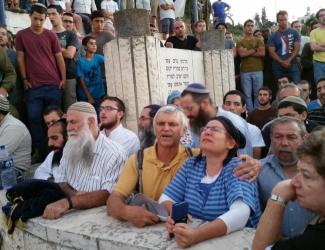 (Photo: Family at the funeral. Credit: David Wilder)
How then, will these acts stop the chaos cold, and bring back some kind of order.
As King David teaches us, with the continuation of the verse, ‘Bakesh Shalom v’Radfeihu‘ which means, ‘search for peace and run after it.’
We can only hope for peace, we can only seek out peace, we can only run after peace, after evil is vanished, vanquished, eliminated, and ‘good’ is an accepted and accomplished fact. The lack of either of these two elements prevents any chance of reaching peace.
We know. We’ve been living this chaos for many many years.
The time has come to put an end to chaos and then achieve an authentic peace, preventing a mother’s tears, seeing her 13 year old daughter’s body looking like a flour sifter.
Article originally published here.

Next Post “Guidelines for Effective Propaganda” to market Biafra

David Wilder was born in New Jersey in the USA in 1954,[2] and graduated from Case Western Reserve University with a BA in History and teacher certification in 1976. He went to Israel in 1974 and studied in Yeshiva for over eight years. He worked at Yeshivat Shavei Hebron in a Public Relations capacity. He has worked at Hebrew University and Yeshivat Mercaz HaRav. In the past David has served as Hebron community spokesman.

David Wilder was born in New Jersey in the USA in 1954,[2] and graduated from Case Western Reserve University with a BA in History and teacher certification in 1976. He went to Israel in 1974 and studied in Yeshiva for over eight years. He worked at Yeshivat Shavei Hebron in a Public Relations capacity. He has worked at Hebrew University and Yeshivat Mercaz HaRav. In the past David has served as Hebron community spokesman.