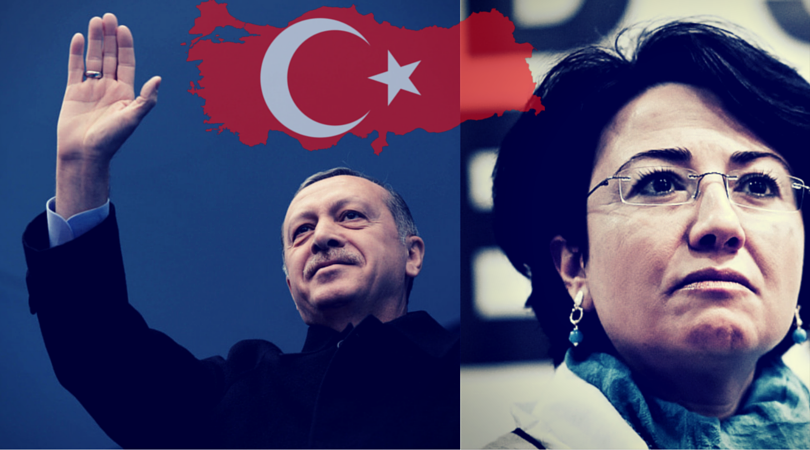 The real reason for the rupture of relations with Turkey is not because of anything Israel has (or has not) done. It is a result of what Turkey has become.

Israelis have no conscience, no honor, no pride. Those who condemn Hitler day and night have surpassed Hitler in barbarism. – Turkish President Recep Tayyip Erdogan, (7/19/2014)

National honor is not just something people talk of on the street…It has strategic significance– Moshe (Bogey) Yaalon, Israel’s Deputy Prime Minister, (8/17/2011).

The recently announced reconciliation accord—or rather “deal” between Israel and Turkey—is utterly unconscionable—and incomprehensible. From an Israeli point of view, it is devoid of any logic on every imaginable level—national, ethical, security and even commercial—except perhaps in the immediate short-term.

For this “deal’ to produce any beneficial results for Israel, beyond those that would accrue to it anyway without it, would be extremely implausible, defying all probability, evidence and common sense – a stunning victory for unfounded optimism over sober assessment of prevailing realities.

Just how detrimental the “deal” would be for Israel is underscored by its overwhelming rejection by the Israeli public, reflected in opinion polls conducted just after news of its impending conclusion broke. According toChannel 10, a majority of almost 2 to 1 in the overall population opposed the “deal”. In the Jewish population, the ratio of opponents to proponents rose to almost 3 to 1. By contrast, in the Arab sector, the numbers supporting the “deal” was nearly five times higher than those opposing it!

This is an interesting statistic in assessing the merits (or lack thereof) of the “deal”. After all, unless one ascribes to the (largely non-Zionist) Arab population a more astute grasp of the national interest of the Jewish nation-state than one ascribes to the (largely pro-Zionist) Jewish population, the significance of this finding is crystal clear—for anyone with the moral courage and intellectual integrity to acknowledge it.

But perhaps the most reliable measure of the detriments of the “deal” was the undisguised display of joy and satisfaction with which it was received by Arab Knesset member of the anti-Zionist Balad faction, Hanin Zoabi, ade jure Israeli citizen, with full civil rights, who has spent years denigrating her country and consorting with its enemies. Much of Zoabi’s approving glee was due to what is perhaps the most infuriating and disturbing aspect of this ill-conceived deal: Israel’s agreement to pay compensation of $20 million to the families of the homicidal thugs (whom Zoabi accompanied), killed while attempting to disembowel IDF naval commandoes, after they rappelled onto a Turkish vessel in 2010, to prevent it breaching the legal quarantine of the Hamas-ruled terrorist enclave of Gaza.

Flushed with victory at the macabre precedent of compensation being paid for the consequences of the attempted lynch of IDF combatants, she crowed: “The agreement by Israel to transfer the compensation to Turkey constitutes an admission of guilt to the murder of nine human beings…This shows that they were not terrorists but victims of [unprovoked] violence”.

Regrettably, but inevitably, many will believe her.

All Israel’s denials and explanations that this ill-considered “gesture” does not constitute acknowledgement of wrongdoing on its part will be of no avail. Few will be convinced that, if truly blameless, Israel would consent to pay multi-million dollar compensation, merely to allow its Turkish detractors to establish relations with it, relations which Turkey desires no less (and probably more) than Israel does.

Not less alarming and ominous is the fact that according to the terms of the “deal” Israel will allow Turkey to build infrastructure projects in Gaza, such as a hospital, power station and desalination plant; and to transfer unlimited (!!) humanitarian aid and equipment to Gaza, as long as it goes through the Israeli port of Ashdod.

It is difficult to conceive of a permit more perilous than this. After all, it is clear that with the initiation of these “projects”, huge (indeed, “unlimited”) amounts of dual purpose materials – such as cement, metals and chemicals—will flow into Gaza.  Inspections in Ashdod will be of little value—since after any materials enter Gaza, Israel will have little control over what their final destination—or who their end-users—will be.

Furthermore, if the construction of Turkish projects involves the presence of Turkish workers and/or experts in Gaza, another—no less worrying—scenario is likely to arise: If Israel is (again) compelled to use force against the terrorist organizations deployed throughout the area, there is a tangible risk of Turkish civilians—perhaps even Turkish security personnel—being hit, especially if these organizations operate from within (or from underneath) the projects’ perimeters. Clearly, it is not difficult to identify the potential for a dangerous deterioration in the relationship between the two countries.  Indeed, even the specter of possible armed clashes (something Erdogan himself has threatened) cannot be discounted.

At minimum, the presence of Turkish citizens and assets in Gaza is liable to constitute a serious constraint, inhibiting Israel’s freedom of action—both political and military—against the terrorist forces that operate in, and out of, Gaza.

Gas as an excuse?

The question of finding export markets has been cited as a major driving force for the “deal” with Turkey, which is robustly seeking to reduce its dependency on Russia, the source of   over half its gas requirements.

However, on closer consideration, the matter of gas seems more an excuse than a substantive reason justifying the “deal”.  Indeed, it is hard to identify the prudence in a policy, which creates massive dependency on a single customer (that costly construction of conveyance infrastructure would entails), thus mortgaging much of the future of the gas export trade to the vagaries of an inherently inimical, petulant and unpredictable leader.  Indeed, with Erdogan at the helm, every crisis or dispute over a range of topics, on which Israel and Turkey may disagree, is liable to bring about a threat to discontinue Turkish purchases.

Energy expert, Professor Brenda Shaffer, cautions against falling prey to the notion that supplying gas can act as an impetus for improved bilateral relations. She writes (The Marker, (12/ 28/2015): “To date there is not a single case where the lure of supplying gas or oil contributed significantly to resolving conflict…Energy trade does not cause peaceful relations; it reflects peaceful relations”.

Israel would do well to heed this warning.

The impact on others

The crisis in Turco-Israeli relations led to a blossoming of ties with several other countries, all of whom have some degree of tension in their relationships with Ankara, such as Russia, Greece and Cyprus.

It is highly unlikely that any “deal” that benefits Erdogan will not have some negative impact on the budding bonds with these countries, and the amount of trust they feel can they place in Israel as an ally. Moreover, there can be little doubt that, as Erdogan is a fervent supporter of the Muslim Brotherhood, any bolstering of his standing in Gaza will cause rancor and resentment in Cairo, where the amenable Sisi government is under constant threat from the Turkish ruler’s Islamist protégés.

I differ with newly appointed Defense Minister Avigdor Liberman on a range of topics, but I find it difficult to disagree with his critical assessment of the impending entente, expressed several months ago, prior to his joining the coalition: “Erdogan leads a radical Islamic regime, the Turks… are at odds with Russia…We have made considerable efforts in recent years to establish ties with Greece and Cyprus and have reached important agreements with them… [The agreement with Turkey] will harm them…It will also harm our ties with Egypt…”

Indeed, in an analysis of the Turco-Israeli “deal”, entitled “After the Israel-Turkey Agreement, Turkey and Hamas Will Still Collaborate”, Yoni Ben Menachem former Director General of the Israel Broadcasting Authority, now a senior Middle East analyst for the Jerusalem Center for Public Affairs, wrote: “Although so far Egypt is keeping mum, in the past it expressed great displeasure at the possibility of Israel giving Turkey any sort of foothold in Gaza.”

There is little reason to believe that Egyptian displeasure with the current deal will be in any way diminished.

Moreover, on Monday (6/28), the Israeli business daily, Globes, warned “Russia, from which Turkey imports 55%-60% of its natural gas, will do everything in its power to prevent this project [Israeli supplying gas to Turkey] from getting off the ground.”

Quoting a former senior Israeli diplomat, Globes reported that: “The deal with Turkey will hurt relations with Greece and likely Cyprus.” Referring to an agreement, signed in January between Cyprus, Israel and Greece, calling for strengthening trilateral ties, he remarked: “Israel gave Cyprus and Greece the illusion that it was onboard; signing a deal with Turkey is a sort of betrayal.”

Even commercially, there seems little point in the “deal”. While political ties between governments may have soured, relations between the two business communities have strengthened considerably.

Thus, despite the breakdown of diplomatic ties, business between the two countries has increased almost five-fold since the pre-Erdogan 1990s, and roughly doubled since 2009 (the year before the Gaza flotilla incident)—reaching almost $5.5 billion in 2014.

But beyond this, if Erdogan has truly undertaken a fundamental reassessment of Turkish interests, and rapprochement with Israel is now perceived as an important national goal, would he really be prepared to sacrifice it for a paltry $20 million dollars compensation or the dubious privilege of providing humanitarian aid to Gaza? There are only two possibilities:

Either he would; or he wouldn’t.

If he would, this demonstrates how little store he places in renewed ties with Israel, and should be expected to disrupt them for a myriad of less-than-weighty pretexts in the future. Hence Israel should eschew any concessions to attain such ties.

If he wouldn’t, there is no need for Israel to make any concessions for renewed ties with Turkey, since Ankara would be compelled to establish them anyway—whether the $20 million dollars or the provision of aid to Gaza was forthcoming,  or not.
Simple logic, isn’t it?

The loss of Turkey as a strategic ally is a huge blow.

But we should not lose sight of the fact that the real reason for the rupture of relations was not because of what Israel has – or has not – done. It is a result of what Turkey has become. Indeed, it would be foolish to believe otherwise, for virtually the only thing unchanged in Turkey since the ascent of Erdogan’s party to power is its geographic location.

Today, Turkey is a very different country from what it was in the 1990s, the heydays of the bond between the two countries, when it was a constitutionally decreed secular nation, pro-Western and largely detached from its geographical environment in terms of its aspirations, affiliations and desired future development.

Since then, Turkey has undergone a dramatic metamorphosis in its socio-cultural and political “DNA” –and until it undergoes a comparable “counter-revolution”, the chances of any genuine repair are slim indeed.

However, as long as the principle author of the country’s current Islamist revolution (Erdogan himself) remains in power, the odds on any counter-revolution taking place are negligible.

Accordingly, the most plausible way to promote conditions likely to induce an authentic, durable enhancement of Israeli-Turkish relations, is to undermine Erdogan, let him wallow in the morass of problems his own arrogance and bluster have created for him, so that his domestic adversaries can grow stronger and eventually replace him.

Regrettably, the current “deal” does precisely the opposite!

It allows him to boast of achievements and helps extricate himself—even if temporarily—from his current self-made difficulties. As such it serves to bolster his standing and this, necessarily, weakens his opponents, who strive to replace him.

Accordingly, beyond the official “spin” extolling the far-reaching benefits that will allegedly accrue to Israel as a result of this unfortunate and unnecessary “deal”, it is difficult to grasp how it will advance Israel’s interests in any meaningful way.  Sadly, it is far more likely that quite the reverse will prove true.